With a name like Sassy Sissy it’s shouldn’t be surprising her owner characterizes her as “a little spitfire.” 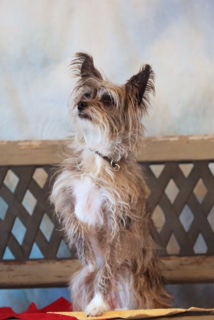 Sissy had the “My Special Girl” look for her owner Donna Hartwig. Photo by Debbie Fields

“That totally captures her personality and her drive,” says owner-handler Donna Hartwig, of Big Rock, Ill., of the 10-pound Jack Russell Terrier/Miniature Dachshund/Komondor mix, the lone All-American Dog in a field of 24 competing in the third annual Masters Obedience Championship at Westminster Monday, Feb. 12.

“I’m not sure on the Komodor part of the DNA test,” says Hartwig, “because that is a pretty large dog. The only thing big about her is her attitude.”

The 5-year-old Sissy’s story boasts a rags-to-riches accent. She was adopted at 7 weeks old from a party in Southern Illinois in 2013. “She had that scrawny, little mutt look,” recalls Hartwig, “that said take me home. I just couldn’t leave her behind.”

And ever since, the pair have been on a fast track together.

For Hartwig, a former Newfoundland owner/handler, Sissy represents a huge departure in size and temperament. “I could probably fit six of her crates into a Newfoundland-size one.” 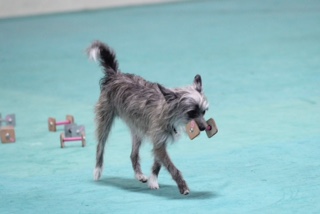 The little All-American Dog brings back the dumbbell during a training exercise. Photo by Debbie Fields.

She has always taken her dogs through obedience classes because she viewed it as an owner responsibility for keeping them manageable in public. “Sissy was so full of energy that I knew I couldn’t waste any time channeling it in the right direction.”

At 5 months of age, she had Sissy enrolled in beginning obedience, where she received foundation basics. Seven months later, the tiny tornado received her Canine Good Citizen designation on her first birthday.

“At that point, I decided to try my hand at competing with her. First, I thought I would just get a CD title. After three shows and three first places, we accomplished that. Next, we went after the CDX title, which proved a bit more difficult. The broad jump was particularly challenging for her at shows, although she had no trouble with it in training.”

Enter trainer Dave Parison, of Plano, Ill. With his steadying influence, Hartwig and Sissy were rolling again. Three first places later they had a coveted CDX title. “I was having fun, enjoying the challenge and building an amazing bond with this little character. She was trusting me and it simply affirmed that dogs are so amazingly smart, willing to please us and enjoy doing it.”

That trust and bonding process has taken the pair on to UD, UDX titles and to the on-ramp of a coveted OTCH. “I still have to pinch myself,” she says, “I can’t believe three years later we have come this far after thinking I originally just wanted to see if we could achieve one obedience title.” According to the American Kennel Club, Sissy was the fourth mixed-breed dog to earn a UDX obedience title. 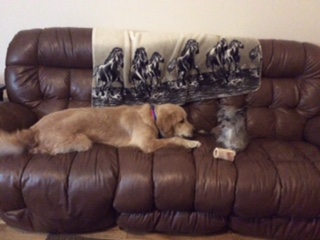 Sissy seems to be telling younger – and bigger — housemate, JJ, don’t mess with my toy.

Keeping Sissy sharp is an ongoing process. The two train with Parison weekly and every other week at two clubs 50 minutes away. “It’s important to train and proof at several places,” Hartwig adds.

Social interaction comes easy for Sissy. She greets family and friends at home in a rollicking fashion. “I taught her a trick of running up my body and into my arms. I have to watch her because sometimes she gets so excited to see them that she thinks she should do the same with them.”

The Westminster experience will be a first for both Hartwig and Sissy. “It’s a big stage out there for this little dog,” says the owner, “but I think she will acclimate fine.”

Sissy lives with Lily, a `13-year-old Dachshund, and JJ, an “obnoxious” young Golden Retriever puppy. “She would like me give him back, as he is a pest and always wants to wrestle and play. He can be a bit overpowering at times, but Sissy remains the boss.”

The diminutive dog’s exploits haven’t been limited to the show ring. She appeared in a cameo role in the 2016 romantic comedy film, “Who Gets the Dog?” starring Alicia Silverstone, with three other pooches.

It was shot in a Chicago park on a cold January day. “We were supposed to be filmed at 7:30 a.m., but soon the time was changed to 9 and finally 3 p.m. So they put us up in a church basement until they were ready for us,” Hartwig recalls. “It was so cold they made me go stand in front of a big heater to keep Sissy warm, even though I had her wrapped in a blanket.” 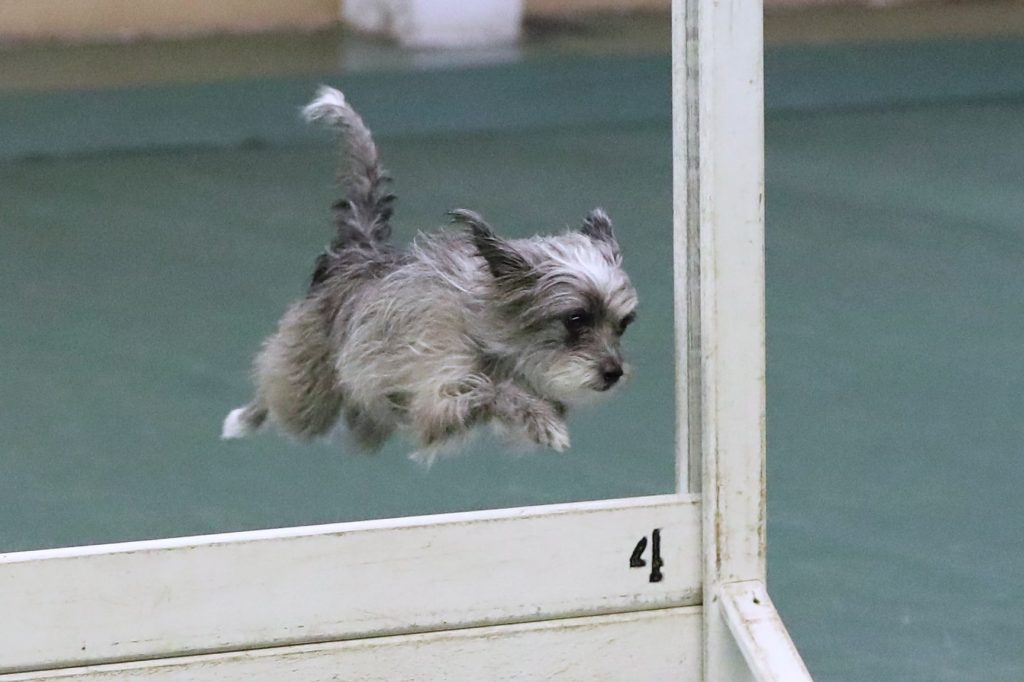 Obedience isn’t the pair’s sole focus. They are also involved in agility competition and trick training. “Obedience is our most challenging. Being animals are like kids, you never know what they are going to do when they get in the ring. Sometimes they surprise you with a new rendition of the exercise they had perfected in training class. I acknowledge and praise my dogs when they are doing a behavior I like in everyday living. It helps them know how I like them to behave and results in less corrective training later.”

Will Sissy take a bite out of the Big Apple? Who knows? But, Hartwig smiles, “The judges are always saying she gets cuteness points when we walk into the obedience ring. I just want this to be a fun, lifetime experience with good memories for both of us.”