In the deadly aftermath of killer Hurricane Matthew, American Humane, the country’s first national humane organization and the first to serve animals in disasters, has moved its famed animal rescue team and two giant 50-foot emergency rescue vehicles into one of the hardest-hit areas to set up a major ongoing emergency aid and reunification center for pets caught in the catastrophe.

American Humane’s renowned 100-year-old animal rescue program, is working with the local Palmetto Animal League to help displaced pets at its non-profit shelter in Okatie, and create a Pet Disaster Recovery Center for the region as part of an unprecedented and comprehensive response to rescue and recovery efforts for pets, including distribution of food and pet supplies, veterinary clinics for injured and ill animals, reunifications of pets with their families, and other critical services as needed by the disaster victims.

Palmetto Animal League (PAL) is a private, non-profit animal shelter in Okatie that rescues cats and dogs and provides them with a home-like environment until a forever family can be found. PAL currently has 155 cats and 25 dogs in their Adoption Center and even more in foster care, many with significant health and medical needs. Okatie is one of the hardest hit areas ofSouth Carolina, near Hilton Head Island, which suffered from what the governor called “unprecedented damage.”

“The local PAL shelter reached out to us to help them and their community recover from the disaster, and we will do everything in our power to make a difference for the animal victims and their families,” said Randy Collins, national director of animal rescue for American Humane. “But we also want to make sure the larger region has animal disaster relief services now that the storm is over and the cameras are leaving. The hurricane is gone, but the need is not.” 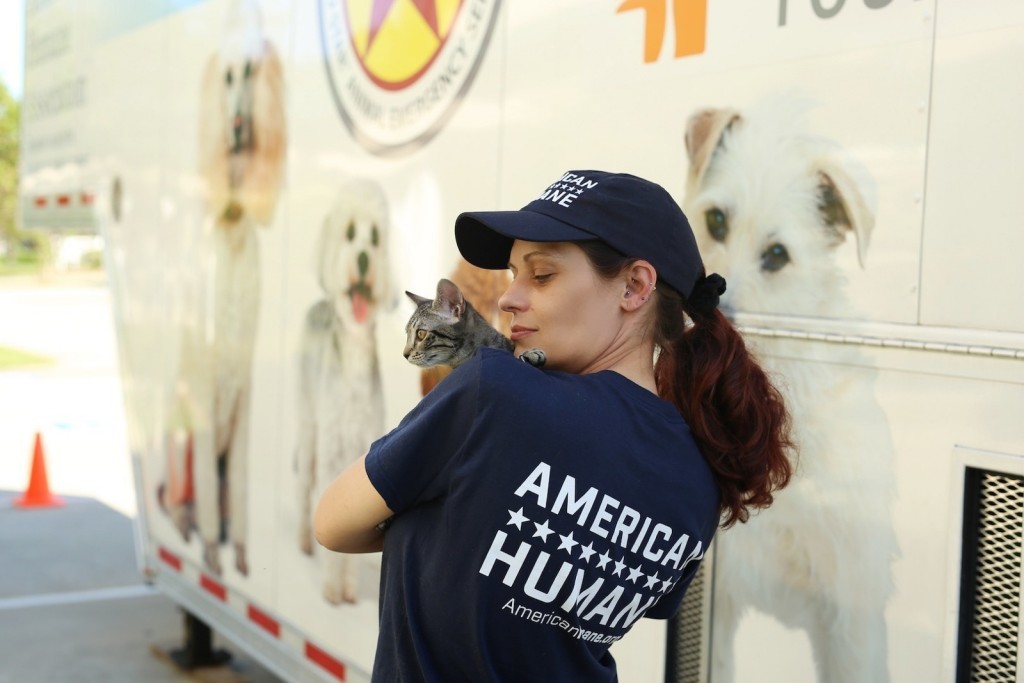 American Humane’s legendary animal rescue team has set up a major emergency aid and reunification center for pets caught in the devastation of Hurricane Matthew.

“Palmetto Animal League is thankful to be teaming up with the American Humane to help provide much-needed services for Lowcountry pet owners affected by the storm,” said Fred Liebert, PAL chairman of the board. “With PAL resources stretched to the limit, American Humane didn’t waste any time setting up their mobile disaster pet recovery center to offer lifesaving emergency supplies and support to the public.”

As killer Hurricane Matthew neared U.S. shores, American Humane rushed its famed rescue team into action. They strategically moved vital equipment into the areas expected to be hardest hit in Florida and South Carolina, including two of its 50-foot emergency rescue vehicles made possible by the support of philanthropist Lois Pope, the Kirkpatrick Foundation, the Donner Foundation, and Banfield Pet Foundation. One of the emergency vehicles was driven nine hours by senior team member Jeff Eyreand his three-legged German Shepherd Dually to help prepare a shelter for 117 cats and 49 dogs in North Myrtle Beach, South Carolina. He, shelter employees and volunteers worked tirelessly over the next 36 hours to prepare for the storm, whose winds were so fierce they actually moved American Humane’s giant F-350 truck. As shelter workers remained sheltered in place in their homes and with their families, Jeff and Dually rode out the storm as the only guardians of the 166 animals in the shelter. When the shelter lost electricity, they used their emergency rescue vehicle to power the entire facility, running fans and preventing the animals from overheating.

Additional Tips and Tools to Save Lives

American Humane and its supporters are providing additional tips and tools that can save lives. Read here to find ways to keep your animals safe after the storm is past.

To further help pets and pet owners, American Humane’s century-old animal rescue program has a partnership with mobiPET, a new, high-tech, visual “AMBER Alert” for missing pets that helps reunite lost pets with their owners. Any pet owner who has lost a pet in South Carolina’s Jasper County or Beaufort County in the 29906, 29909 and 29910 zip code areas, who has a photo of their pet in a smartphone or computer can go to www.mobipet.me and click on the “Rescue” tab to fill in your information including a photo of your missing pet and your five-digit zip code. This program requires a smart phone with a wireless connection or a computer with an internet connection to activate the lost pet photo alert to the designated animal shelter(s).  mobiPET President Dave Ropes says, “We are waiving the $50 fee in this disaster area and would hope that pet owners donate to American Humane for helping provide this innovative new pet rescue service.” Generally, non-registered owners whose pet becomes lost can access the service for a $50.00 emergency registration fee, but during an American Humane deployment, mobiPet is waiving the fee for those within the disaster area.

“The storm may have passed, but serious dangers and critical needs remain for both people and animals,” says Randy Collins. “Our animal rescue teams are on the ground to deliver help, hope and healing to those in greatest need, and thanks to our supporters, we can bring additional lifesaving resources to the animal victims of this storm and their families. Our mission is and has always been to be first to serve in the protection of animals, and we are doing all we can do to make a difference to lost, frightened, and hungry animals who have lost their homes and who need our help.”

About American Humane’s Animal Rescue Program
American Humane’s animal rescue program was created in 1916 at the request of the U.S. Secretary of War to save war horses wounded on the battlefields of World War I Europe.  Since then, it has been involved in virtually every major disaster relief effort from Pearl Harbor to 9/11, Hurricane Katrina, the Joplin, Missouri and Moore, Oklahoma tornadoes, the Japanese and Haitian earthquakes, and Superstorm Sandy.  Over just the past dozen years our rescue teams have saved, helped and sheltered more than 80,000 animals. For more information or to support these efforts go to www.americanhumane.org