REGISTER TO RECEIVE NEWS UPDATES >>
You are at:Home»Breeds»From Popular Culture to Saving Lives: The German Shepherd Dog Is A Winner
By Good News For Pets on November 10, 2020 Breeds, Dog News, Pet Care

With President-Elect Joe Biden’s German Sheperds Major and Champ in the news, we took a look back at our coverage of the breed in this our 20th anniversary year. Just three years ago the breed took top honors at Westminster Kennel Club Dog Show. Read on for more history…

When the German Shepherd “Rumor” won  Best in Show at the 141st Westminster Kennel Club Dog Show , we were thrilled to see this majestic breed win – and were not suprised by the esteemed Tom Bradley, III Best in Show judge’s selection. Goodnewsforpets has often covered this noble breed over 18 years – from the story of Rin-Tin-Tin to the 9-11 search & rescue dogs to the establishment of the American Humane Hero Dog Awards®. Even the recent donation of Vectra 3D® by Ceva Animal Health, LLC to the Alameda County K9 Unit as part of their Double Defense protocol for heartworm protection and prevention gave us pause to admire the good works of this breed.

Here’s some more interesting breed information direct from the AKC:

Generally considered dogdom’s finest all-purpose workers, German Shepherd Dogs are large, agile, muscular dogs of noble spirit and high intelligence. For such deep-chested, solid dogs, they move quickly with great nimbleness afoot. The German Shepherd’s natural gait is a free-and-easy trot, but when duty calls they can turn it up a notch or two and reach great speeds. Standing as high as 26 inches at the shoulder and built like a brick doghouse, the German Shepherd Dog when viewed in outline presents a picture of smooth, graceful curves rather than angles.

Derived from the old breeds of herding and farm dogs, and associated for centuries with man as servant and companion, the German Shepherd Dog has been subject to intensive development. Sponsored by the Verein fur Deutsche Schaferhunde, the parent club of the breed founded in 1899 in Germany, the cult of the Shepherd spread rapidly from about 1914 onward in many parts of the world. The German Shepherd Dog was officially recognized by the AKC in 1908.

The German Shepherd is a loyal family pet and a good guard dog, the ideal choice for many families. They require regular exercise. Training is one 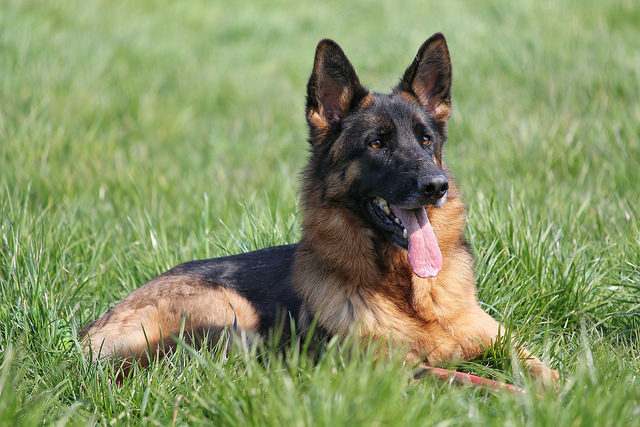 of the most important responsibilities of the dog owner. Basic obedience training will make the dog a better companion and strengthen the bond between the dog and owner. Classes—ranging from puppy or kindergarten to adult and advanced obedience training—are available in most cities, offered by local German Shepherd Dog clubs or all-breed kennel clubs. For the more serious owners, there are competition classes and dog shows.

The first impression of a good German Shepherd Dog is that of a strong, agile, well muscled animal, alert and full of life. It is well balanced, with harmonious development of the forequarter and hindquarter. The dog is longer than tall, deep-bodied, and presents an outline of smooth curves rather than angles. It looks substantial and not spindly, giving the impression, both at rest and in motion, of muscular fitness and nimbleness without any look of clumsiness or soft living. The ideal dog is stamped with a look of quality and nobility – difficult to define, but unmistakable when present. Secondary sex characteristics are strongly marked, and every animal gives a definite impression of masculinity or femininity, according to its sex.

German Shepherds have been featured in a wide range of media. In 1921 Strongheart became one of the earliest canine film stars, and was followed in 1922 by Rin Tin Tin, who is considered the most famous German Shepherd. Both have stars on the Hollywood Walk of Fame. German Shepherds were used in the popular Canadian series The Littlest Hobo. Batman’s dog Ace the Bat-Hound appeared in the Batman comic books, initially in 1955, through 1964. Between 1964 and 2007, his appearances were sporadic.

As a result of their strength, intelligence, trainability, and obedience, German Shepherds around the world are often the preferred breed for many types of work, including disability assistance, search-and-rescue, police and military roles, and even acting.

Feature photo “German Shepherd Dog” by Ronoli, used under a creative commons license. No changes were made.