It is often assumed that only dogs eat anything and everything, however, when leading cat charity International Cat Care carried out a recent survey of vets, many of them had treated cats which had eaten something they shouldn’t have, and required treatment to remove it.

Ingested ‘foreign bodies’ – objects originating from outside the body, ie, things which you would not expect your cat to eat or swallow – can cause severe illness in cats and as part of its Keeping Cats Safe campaign, International Cat Care (iCatCare) is keen to warn cat owners of some of the most common culprits. These include needles and threads, string (particularly from around joints of meat), rubber bands (including loom bands), coins, balloons, bones and foil. Other more unusual items reported included a SIM card, hair from an owner’s wig and earplugs. In many of the reported cases, surgery was required to remove the items in order to prevent further illness. 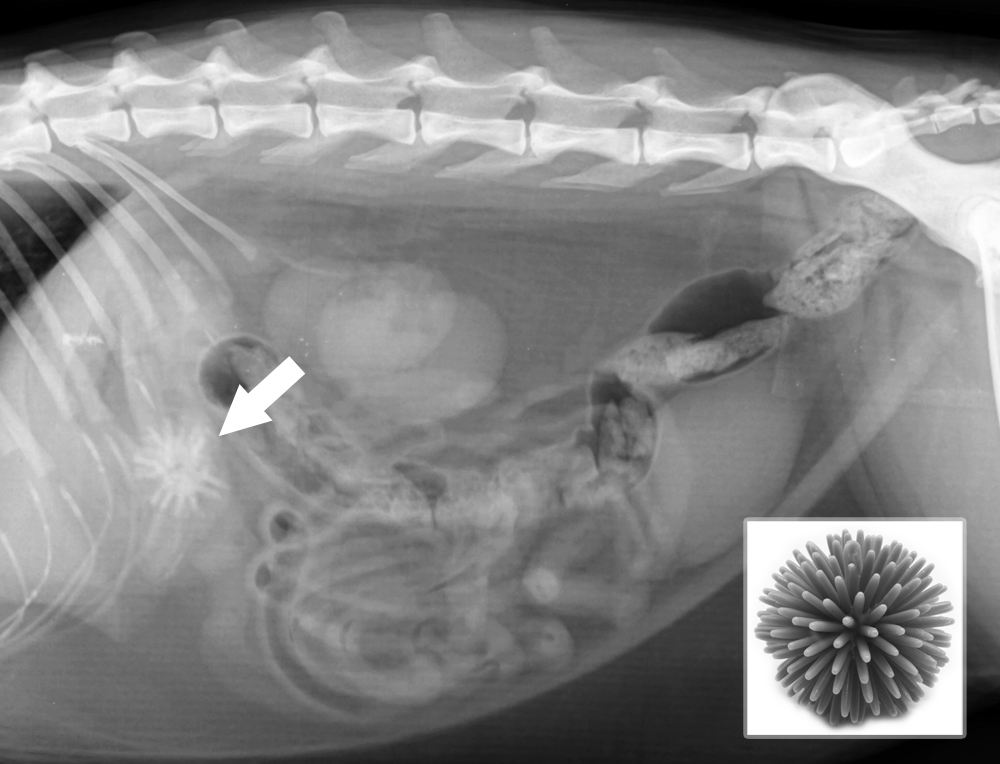 An x-ray showing a spiky toy in a cat’s stomach which was removed at surgery.
(Picture courtesy of Gary Norsworthy)

Vets reported that young cats were more likely to ingest foreign bodies, presumably because they are less wise but more curious and playful than older cats. Pedigrees were also well represented, with Burmese mentioned more often than they should have been, suggesting that they may be more likely to nibble non-food items. It is already known that some pedigree cats (such as Siamese) are more likely to suffer from ‘pica’ (the consumption of non-edible materials), showing behaviours such as wool-eating, which may require the help of a veterinary behaviourist. Cats kept solely indoors may also be more likely to eat things they shouldn’t and owners of indoor cats should make an extra effort to keep their cats entertained to avoid boredom- or frustration-related chewing.

If owners suspect that their cat has ingested something it shouldn’t have, they should consult their vet and not assume things will ‘pass through’ safely, as they often don’t, becoming lodged and causing severe illness. Signs that the object may be causing a problem include refusing food, lethargy, retching and vomiting. However cats are also masters of hiding illness so they may just seem to sleep more and be less keen to play rather than crying or showing other more obvious signs of pain or discomfort. Whatever the signs (or lack of), if an owner suspects that their cat has eaten something it shouldn’t, they should seek immediate veterinary advice. 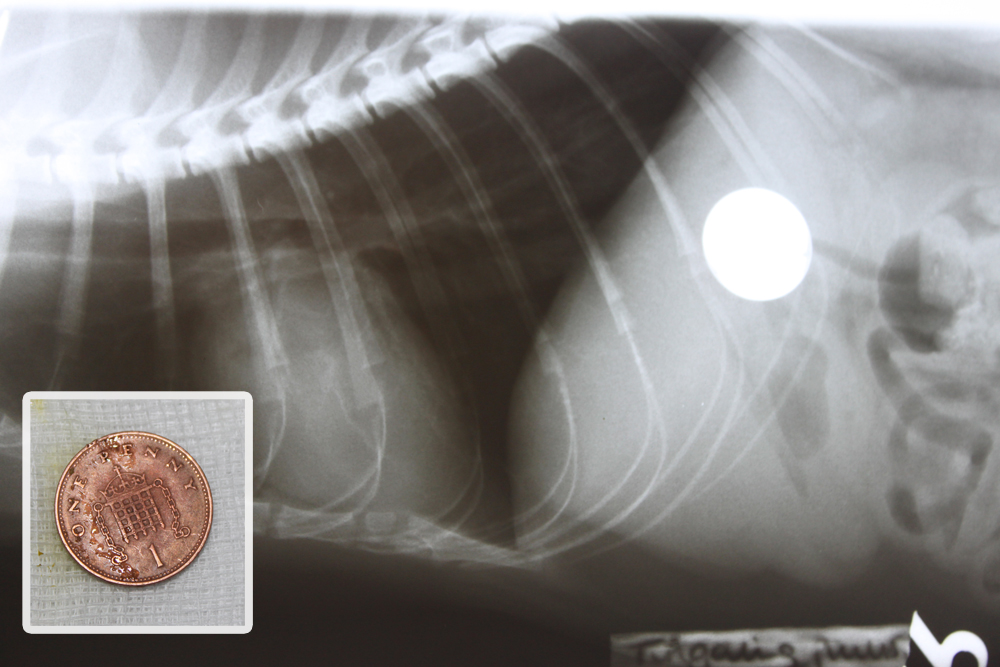 An x-ray revealing a one pence coin which was removed with an endoscope.

To avoid cats ingesting potentially harmful items in the first place, iCatCare advises owners to: keep wool, sewing cotton and other sewing materials out of reach; ensure that cat toys are strong enough to withstand rough play and dispose of any with weak seams or leaking contents; make sure bins are covered to avoid cats foraging for bones or the string around meat; encourage children to put away their toys after use; provide indoor cats with plenty of stimulation and well-made toys; and remove any non-suitable item from your cat straightaway before it is ingested and causes a problem.

The survey showed that cats can be just as silly as dogs when it comes to eating things they aren’t supposed to, and that owners of kittens and of some pedigree cats should be especially aware of the dangers. iCatCare hopes that all cat owners will become more aware of the items that can cause a problem and that they keep them out of reach of our curious feline friends.

For more information about foreign bodies in cats, including some great images, see: http://icatcare.org/advice/keeping-cats-safe/foreign-bodies.

Full details about the Keeping Cats Safe campaign can also be found at: http://icatcare.org/keeping-cats-safe.

A charity dedicated to the health and welfare of cats.

All cats, owned and unowned, are treated with care, compassion and understanding.

To engage, educate and empower people throughout the world to improve the health and welfare of cats by sharing advice, training and passion.