REGISTER TO RECEIVE NEWS UPDATES >>
You are at:Home»Guest Column»Ticket and Dillon: These agile athletes overcome adversity with plenty of resilience and heart
By Ranny Green on February 12, 2015 Guest Column, Pet News, Special Feature

Update (February 16, 2015) – Ticket placed 3rd in the Master Agility Championship at Westminster. For other placements, see our coverage of the winners.

One’s from a Houston suburb and the other from a Pennsylvania township about 30 miles outside Philadelphia but when they hit the big stage called the second annual Masters Agility Championship at Westminster Saturday, Feb. 14 at Pier 94 in New York City they’ll have plenty in common. 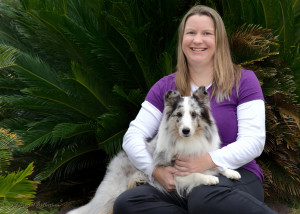 The Texan called Ticket, a jet-quick Shetland sheepdog owned and handled by Brittany Schaezler, a veterinarian, and Dillon, a lightning-bolt border collie, owned and handled by Dr. Isabelle “Robin” Arndt and her husband, Dr. Neal Rubinstein, a University of Pennsylvania School of Medicine professor, arrive on the big stage after overcoming major physical adversities.

Agility, as anyone who has seen it or participated in it knows, is challenging physically and psychologically. And then to be sidelined by injury, the stress test is sent off the charts.

Witness the 5-year-old-old, 21-pound Ticket, a blue merle who underwent eight leg surgeries and was out of agility for more than two years.

She suffered a partial tear of her cranial cruciate ligament (CCL) on her left leg, underwent surgery and returned to competition. This was followed by the same injury to her right rear leg, which resulted in seven operations.

“There was no specific accident,” according to Schaezler. “It’s a very common injury in dogs, both pets and performance. We had trained that night, came home, and when she stood up after napping a couple of hours later, she was on three legs. The next day she was fine, but having been through it before I was very suspicious.”

The surgery, known as Tibial Plateau Osteotomy (TPLO) involves changing the geometry of the stifle (knee) joint in order that the CCL is no longer needed for the stifle to be stable. That was followed by rehabilitation conducted under the watchful eyes of a physical therapist at Gulf Coast Veterinary Specialists in Houston, where the operation was performed.

Ticket’s bone never healed properly, forcing a series of six subsequent surgeries. “The surgeons have no idea why she didn’t heal,” says Schaezler. “We never found evidence of infection or any other reason. She’d had the same surgery on the other leg previously and recovered perfectly.”

With every setback and subsequent surgery, Schaezler felt “defeated and impatient.” Eventually, her frustration turned into fear when she was suddenly faced with the possibility of either fusing her joint or amputating her leg.

“When we removed her splint, I cried because her leg looked terrible–her muscle was gone and she had very little range of motion.  After her seventh surgery, I resigned myself to Ticket’s retirement from agility but was happy that she might recover full function of her leg.”

However, her progress during the months of physical therapy rekindled Schaezler’s hope that Ticket might run again. “Slowly, we started training again, and the first time she ran a sequence I was nauseous. Now, we’re at Westminster, and I’m excited and nervous but always mindful that these runs might never have happened,” she added.

“Despite everything that has happened, she still gives me 100 percent every time we run. She is full of such joyful exuberance, which she never lost despite two years of surgeries, crate rest and physical therapy. Without that, I don’t know how we would have gotten through it. Every time I step to the line with Ticket, I know it’s a gift.”

With a name like Dillon, you kinda sense he’s a sharpshooter. He was named after Marshall Matt Dillon, the central figure in the popular television series, “Gunsmoke” (1955-1975).

And make no mistake about it, this 45-pound, 9-year-old border collie survivor of a mast-cell tumor hasn’t missed a beat since returning to the agility ring following major surgery almost three years ago to the day he’ll be entering the Westminster ring.

After Dillon and Arndt put a MACH 4 title on the dog, Rubinstein recalls, “I was running my hand over him as he was sleeping next to me on the couch. In the bend of his left-front elbow I felt a small, soft lump, maybe the size of a lima bean. I wasn’t concerned. I thought it could be a tiny lipoma, maybe a tick bite or enlarged lymph node.”

Since he had a veterinary appointment the following week for another family dog, Rubinstein opted to make one for Dillon, too.

A needle aspirate was performed and a couple of hours later their veterinarian confirmed the mast-cell tumor. She immediately contacted a nearby veterinary referral center to schedule surgery with a soft-tissue surgeon.

Surgery proved successful and Dillon returned home the following day outfitted with a Victorian collar for two weeks. That overnight hospital stay was Dillon’s first time away from his owners.

“We do need to be vigilant, since a small percentage of these dogs can develop another, independent tumor like this sometimes.” 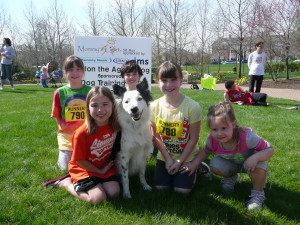 Dillon with friends at an annual agility demonstration for the charity, Family Lives On.
Photo by Neal A. Rubinstein, MD, PhD

In less than two months, Dillon was competing again with his teary-eyed but thankful owners, but had undergone minimal training beforehand.

For three to four months post-surgery, Dillon’s personality was “quite different,” added Rubinstein. “He was less happy, irritable with the other dogs at home and at the trials. There seemed to be something wrong, but we couldn’t figure it out. He certainly wasn’t in pain.”

Suddenly, his persona flipped – to his former happy-go-lucky self, leaving Rubinstein to wonder if Dillon might have been suffering from PTSD, which is common following trauma. “He won’t tell us,” the owner laughed.

When he’s not competing in high-level agility trials – Dillon is a MACH 8 holder – he’s a comfort dog for Arndt, who has been recuperating from a second total-hip replacement surgery in December.

Dillon’s intoxicating passion and enduring character extends to Rubinstein’s office at the University of Pennsylvania School of Medicine as well, where the owner teaches two courses and has the overall responsibility for the first-year students.

“I get to know the first-year students pretty well,” he said, “and they get to know my dogs (Dillon and Legend) because I often bring them to work with me. The dean encourages me to bring them in because, as she says, everyone is in a better mood when the two are around.

“The first year of medical school is very traumatic and stressful for the students. They are always doubting themselves, always worrying about whether they can do what we are teaching them to do. They often come to my office, especially when they know Dillon is around. They’ll tell me about their own dogs, and Dillon will give them whatever comfort they want.” That might involve sitting quietly and petting him, tossing a ball in the hallways to retrieve or simply taking him for a walk.

In short, Dillon has become the unofficial therapy dog for the first-year class.