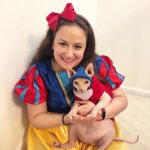 As the recipient of the Grand Prize, Rabadan wins $500 in product from Goodnewsforpets 20th Anniversary Contest partners Purina Tidycats, Sleepypod, and Fetch for Pets. She also wins from Goodnewsforpets two items featuring her choice of her beloved Siamese mix or Syphinx cat breed, a pair of Elena Kreigner designed Heart-Paw earrings and the best yet, a $2,000 donation made in her name will be split between two rescues: Angels Among Us Pet Rescue and Bald and Bully.  In designating the donations, Rabadan said,

“This is amazing to win.  Thank you to Goodnewsforpets and your industry partners Purina Tidycasts, Sleepypod and Fetch for pets. I do love Angels Among Us and I also love Bald and Bully, which is a smaller rescue that focuses on hairless cats and bully breed dogs. I’ve fostered cats for both organizations, and they’re equally fantastic! I know this year both have been hit hard by the pandemic and donations are down, but they’ve continued doing what they can for the fur- (and furless!) babies!”

The contest was featured throughout 2020 in honor of Goodnewsforpets.com’s 20th anniversary. Pet lovers had a chance to win a versatile Goodnewsforpets.com Heart-Paw Charm exclusively designed by Elena Kriegner, a choice of a prestigious American College of Veterinary Behaviorists (ACVB) Decoding Your Dog or Decoding Your Cat book, a special partner prize, and a personal donation to a local shelter or rescue of each individual winner’s choice. The local shelter or rescue was also highlighted on Goodnewsforpets.com. In joining the contest earlier in the year, then ACVB president said,

“ACVB is pleased to join Goodnewsforpets.com in celebrating its 20th anniversary with the Charmed by the Love contest. Unwanted behavior is the number one reason dogs and cats are relinquished to shelters and we welcome the opportunity to have one more way to educate the public about the importance of solving pet behavior issues with science-based training,”said Ellen Lindell, VMD, DACVB, president of ACVB.

For two decades, Goodnewsforpets.com has celebrated the pet-loving community with direct donations and storytelling with posting of content, services and contests that feature donations to shelters and/or rescues of each winners’ choice.  Brands and affiliate programs underwrite the site with sponsored content. To find out more about the Goodnewsforpets.com digital platform and how to participate in this contest, brands and organizations can contact Lea-Ann Germinder directly at [email protected]

“Thank you to all our partners, all who entered the contest, and the Goodnewsforpets community. We were  thrilled to offer a contest that celebrated the love of our pets, educated about behavior and helped less fortunate pets find their forever homes,” said Lea-Ann Germinder, Founder and Publisher of Goodnewsforpets.com.

Goodnewsforpets.com is the animal health and pet product publishing platform of Germinder + Associates, Inc. It combines an award-winning website and social media channels to curate news of interest and importance to pet parents, veterinary professionals and the pet industry. Editorial, contests, sponsored content distribution and advertising is available. Contact Lea-Ann Germinder at [email protected] or 917-334-8682. Like us on Facebook and Follow us on Instagram and Twitter. #Goodnewsforpets20