“And the winners are…”

During this year’s Global Pet Expo Goodnewsforpets.com was thrilled to announce the launch of the first of its 15th anniversary contests under the Contests section of the Goodnewsforpets site. The first contest consisted of three prizes each for nine winners, in honor of the French Bulldog making it’s way to ninth on the recently announced AKC 2014 Top Ten Breed List, and all the way to number one on the AKC Top Breed List for NYC!

To kick off the first in our contest series, we introduced the new, versatile sterling silver Heart-Paw charm, designed by Elena Kriegner exclusively for GNFP! In addition to the charm we also offered a copy of ACVB’s Decoding Your Dog book, and a donation to a shelter or rescue of the winners’ choice. We were excited by the response to our anniversary contest series and the interest in our first contest which ended March 15th.

Out of the hundreds of entires nine winners were randomly chosen, AND THE WINNERS ARE… 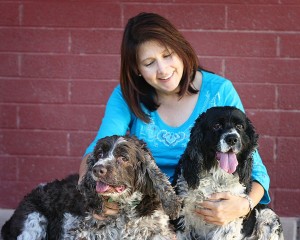 Winner Lynette Ambrosia with two of her seven rescued dogs.

Mark Watson was overjoyed at his win, adding “Rags and I both thank you for the Heart-Paw charm and the donation to our local shelter!” Lynette Ambrosia was just as stunned when we contacted her as being one of our winners, she had heard about the new charm stating “I love the charm so much, it will represent my seven rescue dogs” and is “so thrilled about this win.”

It seemed every winner we contacted was excited about being a goodnewsforpets winner! Betty Wells was “so very excited that I won this awesome contest. Goodnewsforpets is a great place to learn more about our pets and how to care for them.” Thank you Betty for your kind words, we at Goodnewsforpets love what we do!

Winner Susan George was so taken back by the news that she had won she exclaimed finding out was “a great start to her day!” All of our winners greatly appreciated the shelter donation as part of their prize. A donation to a shelter or rescue of the winner’s choice has long been the practice of Goodnewsforpets contests. Katherine Stukel was thrilled at her win and loved the donation as part of her winning, stating “Thank you for the great contest to help support local shelters!”

Everyone can agree with winner Cindi Simon’s quote that “The love of a pet is like no other; healing and loving.” Winner Donna James does, as she commented “if I would have known about the unconditional love, loyalty and health benefits from dogs earlier in life, I would have a backyard full of them.” While we wouldn’t recommend a backyard full of pets, everyone can appreciate the enthusiasm that comes with the love of a pet! Our final winner Angela Lynch understands that enthusiasm as she shared her thanks from not only herself but her pet Woody!

Congratulations again to all our winners and be sure to stay tuned for more information on the next contest in our 15th Anniversary Contest Series, debuting in April!