New York City’s French connection added an entirely new twist last month when it was announced that the French bulldog was the city’s new top dog.

Of course, the iconic Statue of Liberty has always been the city’s – and the nation’s – premier link with France since 1886 when it was dedicated. And don’t forget the city’s dozens of superb French restaurants and many governmental agencies, including the French Embassy, that have attracted visitors and locals for decades.

At a press conference late last month, the American Kennel Club announced that the Frenchie ascended to the top spot in 2014 from its No. 2 standing the previous year, flipping positions with the bulldog. The Frenchie has been in the city’s Top Five most popular breed standings since 2010.

“New York continues to be the city of the bulldog,” said Gina DiNardo, AKC vice president. “Whether the adorable Frenchie or its sweet bulldog cousin, these mild-tempered companions make great pets for a variety of city dwellers.”

True to the Big Apple’s diversity, Frenchies, often described as the “clowns of the dog world,” aren’t No. 1 in all of the city’s distinct neighborhoods, but they are in these: Tribeca, Park Slope, Murray Hill, Financial District, East Village and Chelsea.

Not only is the French bulldog popular in New York City, but nationally, vaulting to No. 9. It’s the first time in the Top Ten in nearly a century. 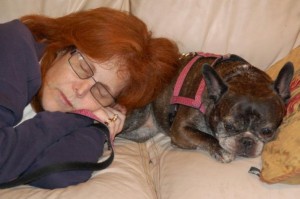 New York is a pedestrian city, emphasizes Frenchie owner Fran Prince, a Midtown Manhattan resident. “They are people dogs, the very definition of a companion breed. People interact with them all the time. My dogs, present and past, lived to be with people. My first Frenchie Dari would go to the park, but before she started to play would say hello to all the humans there.

“My present dog Bebe (15 months-old male) is a social butterfly. If someone looks at him, he will stop and interact with that person. No ball, no toy is more important than a person.”

Probably the ultimate testimonial to the breed’s people skills is Prince’s father, who had never been a dog fan previously until Dari came along. Shortly after the death of Prince’s mother, Dari, 11 weeks old, worked her way into her dad’s life. “Dari decided my dad had no choice but to like her. It seemed like whenever things were quiet she was in his lap.”

And that love affair blossomed thereafter. “All I had to do was say, ‘Dari, want to see Poppy?’ I swear she would leave me in a heartbeat for my dad.”

One day at a nearby dog park, Dari was romping about when she suddenly decided to make a run for Prince, who was sitting on a nearby bench visiting with friends. She ran full speed into her owner, colliding with her face and breaking her nose. No one believed me that my dog broke my nose. All thought I had a nose job. Not!” 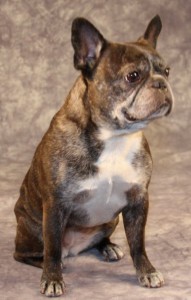 Because there were few Frenchies in the neighborhood at the time Prince purchased her, a typical 10-minute walk extended to 30 minutes or more, as passers-by wanted to touch her and inquire what that was at the end of the leash. “People thought she was everything from a pug to a pot-bellied pig,” she laughs. “Once she leaped up and stole a banana from a child walking in front of us with his father. Talk about embarrassment.”

Chagrin with Dari extended to her public “death yodel” for Prince. “I would go to Central Park with friends and their Frenchies. When Dari saw a squirrel, she became totally focused. Then the screaming would begin, like someone stuck a knife in her gut. Even with the leash in my hand, I tried to pretend it wasn’t my dog.”

Despite their popularity, Prince cautions that Frenchies aren’t for everyone. “They’re not easy to train, they have no tolerance for heat and have allergy issues. Do your homework first and find a reputable breeder.”

Will Bragger, an Astoria resident, echoes Prince’s sentiments. Owner of Magnus, almost 10, Bragger purchased the dog from a backyard breeder and was confronted with one physical issue after another for years. “Despite Magnus’ health problems, he has been the perfect dog,” Bragger adds. “He has never required much exercise and tires quickly when walking after playing with other dogs.” 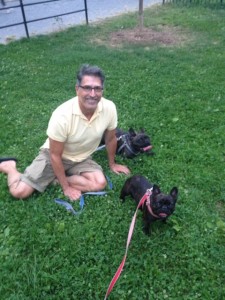 For Matt Paco, a TV producer, and David Andrews, a hotel executive chef, who live in Battery Park, Miss Dixie, 5, has been the perfect companion. “She rarely barks and is a big hit with other pet owners. They usually love how personable she is,” says Paco.

“We often get stopped when we’re walking her. I tell my single guy friends (gay and straight) that they should get a cute dog like a Frenchie – or at least offer to walk one for their friends – because they’re babe magnets.”

Brett Kaplan and Lindsi Shine, of Murray Hill, own two French bulldogs, Eloise, 7, and Angus, 2½. While they’re not large, “they feel like, act like and think they are a big dog,” explains Kaplan. “In New York City, with apartments being the size they are and not with a backyard, it’s easier for this breed to not feel as confined as a larger one would. They are happy to simply sit on the couch with you or play fetch in the hallway.” 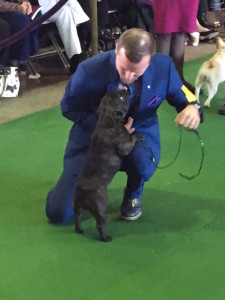 Olive and her handler, Jessy Sutton, at Westminster.
Photo Courtesy of Thomas Flynn

Harley, 3½, and Olive, 2½, are the pride and joy of Thomas Flynn and Travis Fraser. Flynn, a professional stage actor who has appeared in four Broadway productions, says the breed’s propensity for human interaction has a challenge, however. “They are not great left on their own for long periods of time. Thankfully, between my husband and I someone is always home.

“Both are very sensitive,” he adds. “They seem to be as sensitive as humans and one has to be cautious around them using strong emotions.”

Conversely, when most locals see their pair on the street on the Upper West Side in Manhattan Valley, “they flip out,” says Flynn. “We’re stopped several times when we go for a walk. Olive, in particular, is known in the neighborhood as the little diva. The grand champion!” Olive was entered in the Westminster Kennel Club Dog Show last month.

Although she didn’t win, you get the feel that she left the ring still feeling like she stole the show. That’s a Frenchie, isn’t it? 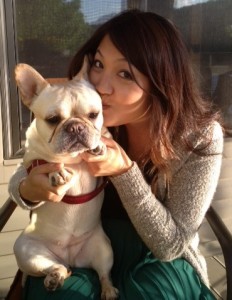 Another Manhattan resident, Crystal Hoang, says her 6-year-old fawn female Mavyn attracts plenty of conversation in the winter when walking and equipped with a hoody and booties. “She’ll usually get approached at least once each morning to have her photo taken,” says Hoang. “On the other hand, there was a time we were crossing the street and a young boy turned around and screamed when he saw her. He thought she was a gremlin. He uttered something like, ‘So ugly, they’re cute!’ Or “A face only a mother can love. ‘ “

Hoang’s employer allows dogs in the workplace, which played a large part in her decision to get one after two years of researching the breed. Initially, Mavyn accompanied Hoang to work two to three days each week but now it’s only about once, since her boyfriend has moved back to the city and splits dog walking, feeding and playing duties with Hoang. “My boss quickly fell in love with her so now the question is always: ‘When is Mavyn coming?’ “