REGISTER TO RECEIVE NEWS UPDATES >>
You are at:Home»Blog Posts»Jen, It Had To Be You: Naming the First Journalist #Germinder20 #PowerofPink Honoree
By Lea-Ann Germinder on July 3, 2018 Blog Posts, Dog Writers Association of America, DWAA, GerminderPR, Power of Pink

Why was I surprised? I had asked her to be an Honoree several months ago, but as with all the Honorees, it would be at a time that worked for her. Due to the timing of SuperZoo and the pending July 9 launch of the DWAA contest, I decided to ask her last week anyway if she might want to do the announcement now, but it meant a fairly quick turnaround.

She was thankful and gracious – and she was game. As I started on the story, my heart warmed with satisfaction knowing the small donation would do some good and the story was definetly worth the telling.  Jen Reeder is the sixth and the first journalist #Germinder20

#PowerofPink Honoree and yes, it had to be her. Her designated $1,000 donation goes to Green Dogs Unleashed.

I did not know Jen Reeder came from a journalist family when I asked her to be an Honoree several months ago. But, as it turned out, it was a beautiful part of the story and holds special meaning. As the interview notes, I met Jen when she became president of the Dog Writers Association of America (DWAA). Since Day One, I have been so impressed with the combination of her youthful demeanor, yet appreciation for classic journalism in leading DWAA. Jen is also a member of CWA and recently won a Muse Medallion.

Jen turned in her written interview ahead of the deadline, but what we didn’t know was that the unspeakable Capital Gazettetragedy and attack on journalists at work was unfolding at the same time. With it came the last several days of disbelief and sorrow at the senseless taking of the lives of five people working in journalism -Gerald Fishchman, age 61, Columnist and Editorial Page Editor,Rob Hiaasen, age 59, Assistant Editor and Weekend Columnist, John McNamara, age 56, Sports Reporter,Rebecca Smith Smith, age 34, Sales Assistant and Wendi Winters, age 65, Community Beat Reporter.

Working with journalism, respect for freedom of the press and the right to free speech is at the heart of what we do. We honor all of them and are so glad that this announcement to honor Reeder came at this time. She has expressed the same. Earlier in the year w 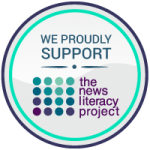 We had made a donation to The News Literacy Project, a national education nonprofit offering nonpartisan, independent programs that teach students how to know what to believe in the digital age. The DWAA is supporting a new program, Young Writers on the Web. I know we will both continue to support journalists, freedom of speech and freedom of the press in the various organizations and initiatives we serve. We stand together on this, and so proud of it.  And about her dad, I just could not resist one more posting of this magnificent below. It captures all that’s right in the world instead of the wrongs.

Thank you Jen Reeder, for being our sixth and first journalist Germinder20 PowerofPink Honoree. It had to be you.