The Human Animal Bond Research Initiative (HABRI) Foundation today announced the results of a study exploring the effects of an email mediated intervention to increase walking in dog owners and non-dog owners, conducted by researchers at Purdue University and published in the journal Clinical Nursing Research. 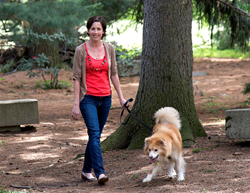 Findings of the HABRI-funded study showed that a simple email intervention sharing the importance of walking and the positive impact of walking on a dog’s health were effective tools to promote walking. These interventions caused participants to increase and maintain dog walking over a 12-month period. Email intervention for non-dog owners also increased weekly minutes of walking compared with baseline measures and control groups; however, dog owners accumulated significantly more walking minutes per week than non-dog owners.

Participants assigned to the intervention group received a twice-weekly email message for the first four weeks of the intervention followed by weekly email messages for the next eight weeks. The emails attempted to influence confidence through a variety of mechanisms which the investigators hypothesized would directly influence dog walking for dog owners and walking for non-dog owners. Previous studies have supported that dog owners who walk their dogs are motivated to do so because of dog-related support for walking. A number of dog-owner participants in this study anecdotally reported that their ability to maintain behavior change in physical activity was in part due to the dog expecting a walk and conditioning the owner to comply.

“With more than 50 million dog-owning households in America, the scientifically-documented link between dog ownership and physical activity has the potential to positively impact public health on a broad scale,” said HABRI Executive Director Steven Feldman. “HABRI is committed to funding research that demonstrates the incredible power of the human-animal bond to improve our health and well-being.”

The HABRI Foundation maintains the world’s largest online library of human-animal bond research and information; funds innovative research projects to scientifically document the health benefits of companion animals; and informs the public about human-animal bond research and the beneficial role of companion animals in society. For more information about the HABRI Foundation, please visit http://www.habri.org.