It opens in the searing desert heat of Afghanistan and closes with snowflakes in Maine. In between “Craig & Fred: A Marine, a Stray Dog, and How They Rescued Each Other” (William Morrow, HarperCollins Publishers, $25.99) is a cascading kaleidoscope of psychological gymnastics. 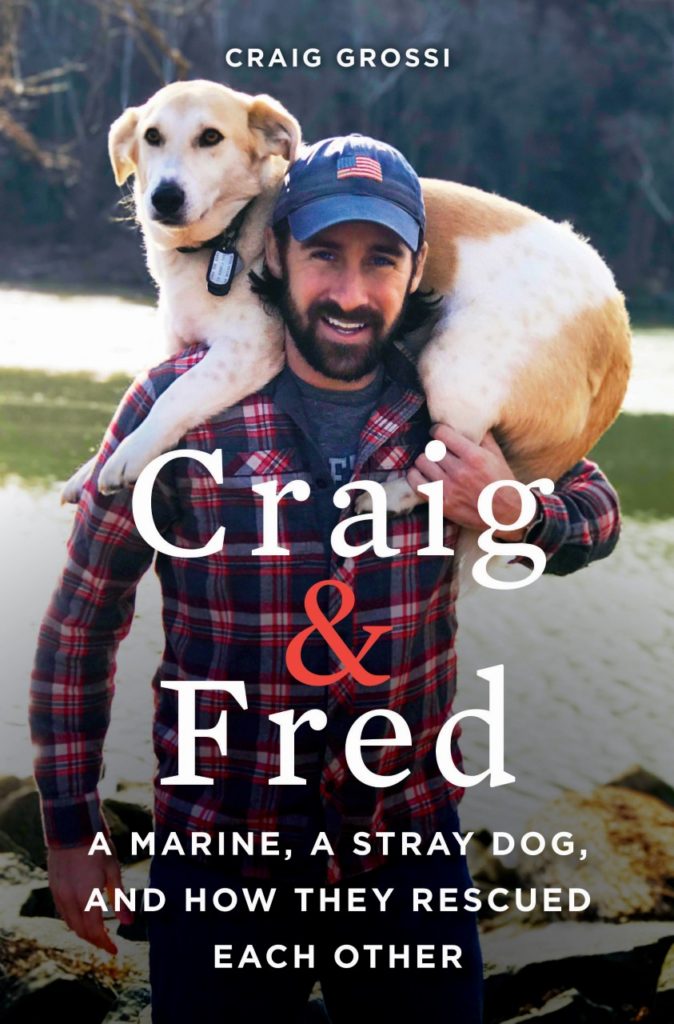 The centerpiece, of course, is a man and his dog, or so it seems it’s his dog. Author Craig Grossi is a nine-year Marine Corps veteran and a Purple Heart recipient who finds love and commitment in a scruffy Afghan dog while on patrol in remote Sangin, Afghanistan,

The stray, “with a big goofy head, short legs and puppy-like pep,” doesn’t appear vicious or run in a pack like most others he’d encountered. “There was something innocent about him; he seemed unaffected by life in a combat zone.”

He quickly becomes popular in the compound and was like a “little brother” to the author. “Not only was he much smaller than any other dogs we came across in Afghanistan – no more than 30 pounds – but his short legs were an anomaly we loved. Being low to the ground didn’t hurt Fred’s pride. He always trotted around the compound like a show dog, head up, tail bouncing, paws flicking the dirt. He had an irresistible combination of innocence and confidence,” Grossi writes.

Quickly, this onetime wanderer finds a home and integrates into a team member. Even to the point, that a fellow Marine, dubs him Sgt. Fred upon returning from a trip to a nearby village with the team.

Fred’s appeal isn’t universal in the compound, where Afghan National Army members are also based. They look with disdain when he receives a handout from one of the Marines. One of the ANA troops exclaims, “How can you Marines expect respect when you treat this disgusting dog like he is a person?” Different culture, different attitudes – and this base is not situated in a part of the country where it is customary to have pets. More than once an ANA commando threatens to shoot Fred, who is living on the edge 24/7. All of this prompts a Fred watch by Craig’s unit members, i.e. keeping him out of harm’s way.

Military personnel are forbidden from housing, feeding or taking possession of dogs in the war zone. While friendly, who knows what emotional and/or physical damage Fred might be bringing to the table. One thing’s for sure: this happy character is covered with black bugs the size of dimes. 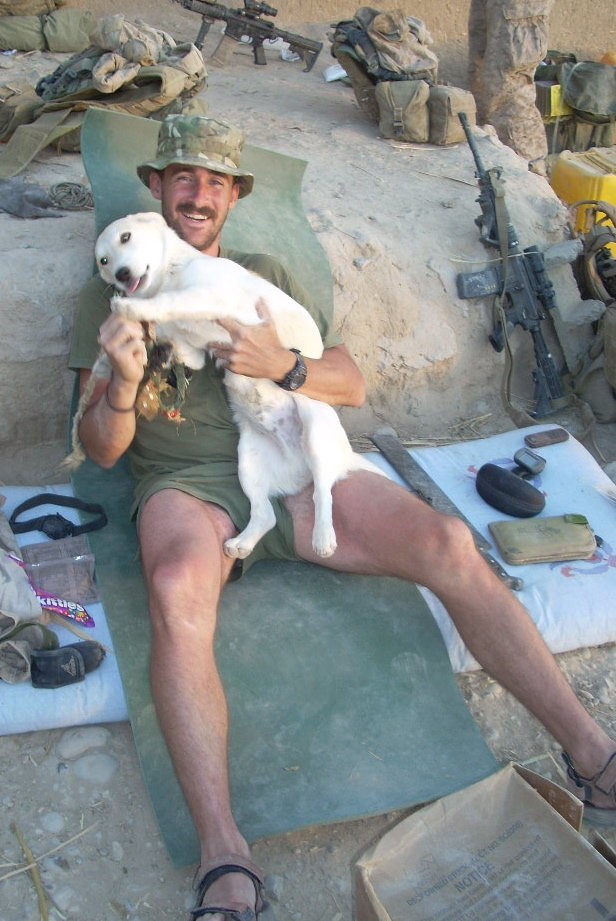 Surrounded by weapons in Afghanistan, Craig holds his new buddy, Fred, who was to become a major project sneaking out of the country. Photo by Dave Moran.

Shortly after taking the beef-jerky handout, the dog remains alongside with a “toothy grin, tail wagging again. “From across the compound, Matt, one of the EDO guys had been watching our exchange,” Grossi says. “‘Looks like you made a friend!’ he shouted. But what I heard was ‘Looks like a Fred!’ The name stuck.”

One of the reasons for the “no dogs” policy is the prospect of personnel contracting rabies from these four-legged carriers. “In a combat zone, some commands considered dogs a threat to good order and discipline,” the author emphasizes. More specifically is the uncertainty a dog could become “a dangerous distraction that could compromise the focus and integrity of the unit.”

Conversely, Fred initially accompanies Craig’s team on night patrols and is so quiet and agile no one questions his company. One night that changes and he is relegated back to the compound, assuming a new role as “greeter in chief.”

Craig is an intelligence collector – his role in the field is to learn as much as possible about the nearby Taliban from villagers. But it quickly becomes apparent his secondary but covert mission is getting this Velcro dog out of Afghanistan and to the United States.

But keeping Fred under wraps is fraught in a cloak-and-dagger scenario for all involved because of the no-pets edict from the commanding general of U.S. Forces in Afghanistan. If Fred is discovered, he will be euthanized. Hence, the longer this drama plays out and the stronger the bond between Craig and Fred is cemented, the urgency of extracting Fred to the U.S. becomes top priority.

This involves reaching out to his sister in the U.S. for help with necessary veterinary forms and seeking assistance from countless others in the way of distractions and cover from the Sangin base to Camp Leatherneck, which would be the eventual take-off site for Fred’s 24-hour journey, three-stop flight to the U.S. (John F. Kennedy Airport in New York City). 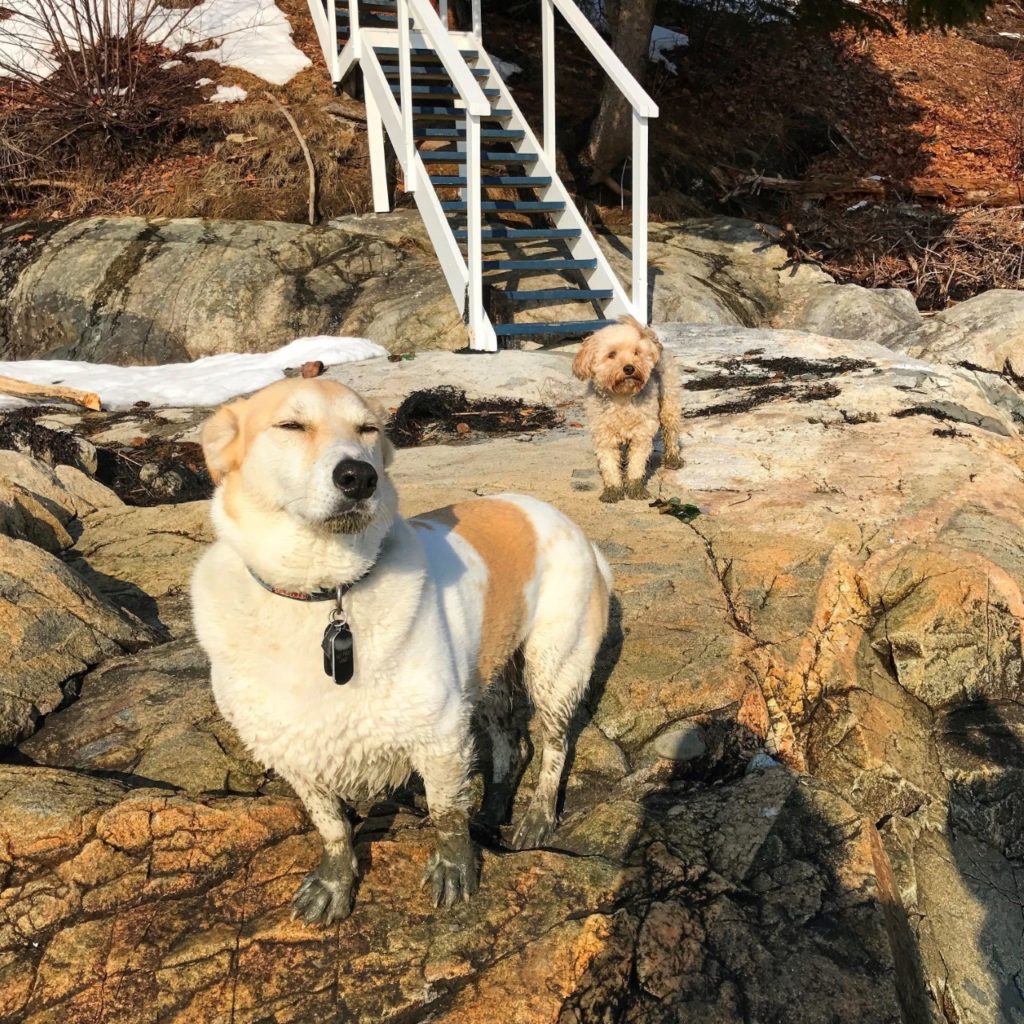 Fred hangs out with his adopted sister, Rudy, in Main. Photo courtesy of the Craig Rossi

Simply reaching Camp Leatherneck (Fred is hidden in a duffel bag for the helicopter trip between the two bases) gives Craig only a brief pause, since the clock is ticking on Operation Fred. Craig only has two weeks to successfully find a way out of the country for Fred, before the Marine will be deployed back to Sangin to complete his deployment. Up step several DHL workers who befriend Fred and go way beyond the call of duty to assist Craig with hiding the dog, assisting with paperwork and making certain the dog is safely crated and boarded on the flight out.

“We were all transplants here,” Craig writes, “trying to survive in our strange circumstances. These guys didn’t have to help me, and still they did. I was humbled by their generosity.”

One of their quick-thinking and possibly life-saving moves on Fred’s behalf comes during a general’s inspection of the DHL complex at Camp Leatherneck, where Fred is secretly housed. That’s when Peter, DHL worker, brings Fred out on a leash parading him along a row of crates, pretending he’s a bomb-sniffing dog. “And Fred,” Craig says, “with his confident trot and natural curiosity was actually making it look legit.”

In the midst of secretly processing Fred for a flight out, Craig encounters a British veterinarian on the British side of Camp Leatherneck and asks if she could examine the dog, which Craig knows nothing about. She deems him “totally healthy” and estimates his age to be 6 to 7 months. Then she writes an unofficial note clearing him for travel.

Even after Fred reaches the U.S., Craig is not out of the woods yet. His patrol unit meets stiff resistance from Taliban fighters, resulting in the devastating loss of two friends. 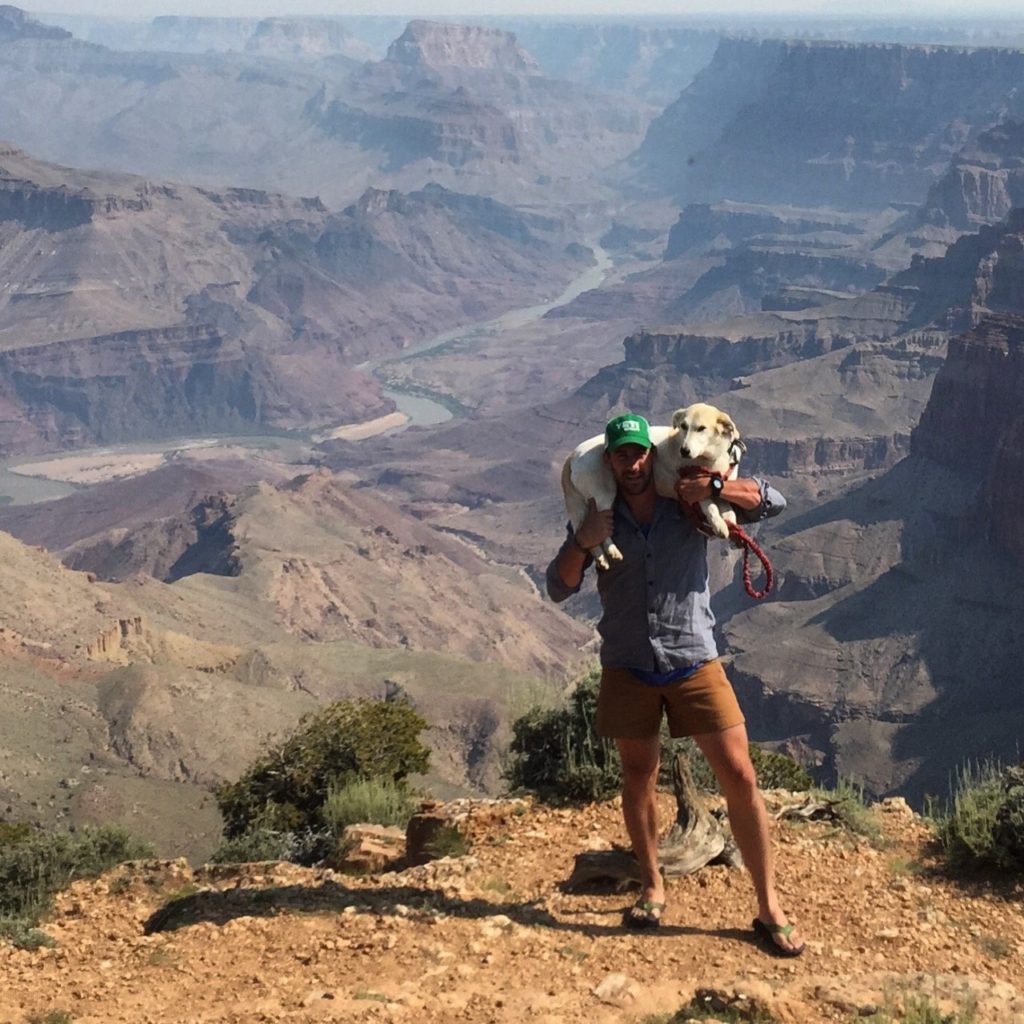 During a nationwide trip with a fellow veteran, Craig and Fred visit the Grand Canyon. It was one of many stops they made on the weeks-long journey that enabled them to meet up with many old friends and meet many outgoing strangers who embraced them. Photo by Josh Tuohy.

The compelling storyline, however is accented with an engaging mix of twists and turns requiring a sharp focus by the reader. One chapter is set in Afghanistan, the next stateside, with the bulk of the latter tied to an adventurous long road trip in a 27-year-old truck with Craig, Fred and a fellow vet, Josh, who he met in a class at Georgetown University (he has since graduated from Georgetown with a bachelor of arts degree in liberal studies and a concentration in international affairs). Josh, too, served in Afghanistan and lost a leg to an IED explosion.

Not only is Fred the center of attention in Afghanistan but the talking point on Craig and Josh’s multi-stop journey about the U.S. Having Fred alongside enables Craig to open an Afghanistan dialogue with strangers when otherwise there would have been a no-comfort zone.

Craig explains, “In everyday life, out at some bar, it could feel impossible to swap stories about the buddies we’d lost. How do you even start a conversation like that? Fred gave us a place to begin, a way to talk about some of the things we didn’t want to say but probably needed to. He gave us a way to talk about war.”

In the closing pages, he discusses the key role Fred has played in his life: “Not only did he remind me what I was capable of, but his presence prevented me from ever taking even a moment for granted. Each day Fred reminded me that a loving, adventurous life was possible if I could continue to choose to be optimistic, even in the face of great calamity or despair. I knew I had rescued Fred once, but Fred continued to rescue me time and time again.”

“Craig & Fred” is a rich portrait of a special bond that dramatizes the adage that every dog-owner relationship is its own ecosystem. In this one, bright sunshine casts aside dark clouds.