One of the most noteworthy and versatile actors, Christopher Walken supports Best Friends Animal Society’s efforts to bring awareness to the plight of millions of cats who die in our nation’s shelters every year. 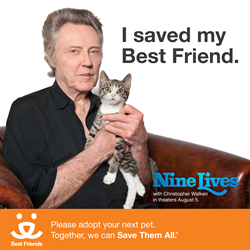 Walken earned worldwide acclaim and the Academy Award for his role in the searing Vietnam war drama The Deer Hunter. Through his career on screen, stage and television, Walken has shown a breathtaking range of skills portraying everything from violent villains to quirky characters in comedies. On August 5th, he can be seen starring in his latest role in the upcoming family comedy Nine Lives. Walken plays a mysterious shopkeeper with a fondness for felines and a few tricks up his sleeve. The film is directed by Barry Sonnenfeld and also stars Kevin Spacey and Jennifer Garner. It’s actually a role he’s somewhat familiar with. At home he and his wife share their life with a shy, stray cat who showed up on their doorstep pregnant. After finding homes for her kittens, “Girl” is now a member of the Walken household.

But not every stray cat is as lucky as “Girl.” It is estimated that as much as three-quarters of cats who enter shelters, most of which are community cats (stray and free-roaming), never make it out alive. Walken supports Best Friends’ efforts to increase adoption and save rates for cats.

According to national statistics, each day more than 9,000 dogs and cats die in the nation’s shelters. Best Friends has brought increased awareness to how people can get involved in the solution by adopting, and spaying/neutering their pets, donating, volunteering and sharing this message with their friends.

About Best Friends Animal Society®
Best Friends Animal Society is the only national animal welfare organization dedicated exclusively to ending the killing of dogs and cats in America’s shelters. A leader in the no-kill movement, Best Friends runs the nation’s largest no-kill sanctuary for companion animals, adoption centers and spay and neuter facilities in Los Angeles and Salt Lake City as well as lifesaving programs in partnership with more than 1,500 rescue groups and shelters across the country. Since its founding in 1984, Best Friends has helped reduce the number of animals killed in American shelters from 17 million per year to an estimated 4 million. By continuing to build effective initiatives that reduce the number of animals entering shelters and increase the number who find homes, Best Friends and its nationwide network of members and partners are working to Save Them All®.