America’s VetDogs is deeply saddened to learn of the passing of George H.W. Bush, the 41st president of the United States. We were truly honored to have placed Sully, a specially-trained 2-year-old yellow Labrador Retriever service dog, with the president in June of 2018, who was specifically matched with him to provide support during his daily activities.

Later this week, Sully will return back to America’s VetDogs in Smithtown, New York for a temporary stay throughout the holiday season before joining the Walter Reed National Military Medical Center’s Facility Dog Program. Sully will be working alongside fellow VetDogs facility dogs SGT Dillon and SGT Truman who are there to assist with physical and occupational therapy to wounded soldiers and active duty personnel during their journey to recovery at Walter Reed Bethesda. “Our thoughts and prayers are with the entire Bush family during this difficult time,” said John Miller, President and CEO of America’s VetDogs. “It was truly an honor to have provided service dog Sully to be by the president’s side for the past several months. As a true patriot and a visionary, President Bush will forever be viewed by people with disabilities and their families as a hero through his efforts to enact the Americans with Disabilities Act. We are forever grateful to his service to the American people.”

Below is the earlier release on the placement of Sully with President Bush:America’s VetDogs Provides President George H.W. Bush With Service Dog Sully
Smithtown, NY (June 26, 2018): America’s VetDogs is honored to place a specially-trained service dog with the 41st president of the United States, George H.W. Bush.  Sully, a 2-year-old yellow Labrador Retriever, was specifically matched to provide support and companionship to Mr. Bush in his daily activities.  America’s VetDogs was recommended to the former president through VetDogs’ relationship with 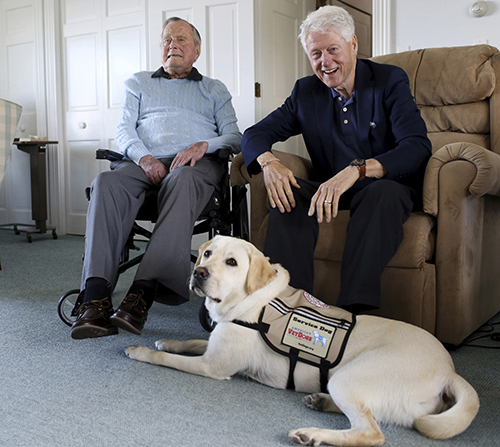 Walter Reed National Military Medical Center in Bethesda, MD. Sully is named after former airline pilot Chesley “Sully” Sullenberger III, who became famous for landing a damaged passenger jet on the Hudson River in 2009.  Sully the dog was raised and trained through the VetDogs prison puppy program, in which inmates raise future service dogs until the dog is about 15 months old. Inmate handlers begin working with puppies on housebreaking, obedience, standardized commands, and teaching the three foundations of service dog tasks: retrieve, tug, and push – all part of the VetDogs training curriculum.  Once a dog returns back VetDogs’ Smithtown campus, training begins and specific tasks are fine-tuned and refined for an individual’s particular needs. “America’s VetDogs’ trainers and staff worked closely with the president’s team to find the best match,” said John Miller, president and CEO of America’s VetDogs, “We are excited to work with President Bush and utilize this opportunity to shine a light on the services America’s VetDogs provides veterans and first responders to live a life without boundaries.” America’s VetDogs trains and places guide dogs for individuals who are blind or have low vision; hearing dogs for those who have lost their hearing later in life; service dogs for those with other physical disabilities; physical and occupational therapy dogs to aid in the rehabilitation process in military and VA hospitals, and PTSD service dogs to help mitigate the effects of post-traumatic stress disorder.  America’s VetDogs service dogs can be trained to do many tasks.  They include retrieving items as small as a credit card to an object as large as a dropped support cane, opening and closing doors, waking their handler from a nightmare, getting help or pushing an emergency button, bracing and supporting their handler when standing or walking up and down stairs, and many more.It costs more than $50,000 to breed, raise, train, and place one assistance dog; however, all of VetDogs’ services are provided at no charge to the individual.  Funding comes from the generosity of individuals, corporations, foundations, businesses, and service and fraternal clubs. To make a gift to support the VetDogs mission CLICK HERE.About America’s VetDogsSince 2003, America’s VetDogs (www.VetDogs.org) has trained and placed guide and service dogs to provide independence, enhanced mobility, and companionship to veterans with disabilities from all eras. In 2015, VetDogs opened its programs to first responders, including fire, police, and emergency medical personnel.  America’s VetDogs is a 501(c)(3) not-for-profit organization founded by the Guide Dog Foundation and serves clients from across the United States.  VetDogs relies on contributions from generous individuals, corporations, service clubs, and foundations to fund its mission to help those who have served our country live with dignity and independence.  It costs over $50,000 to breed, raise, train, and place one assistance dog, but America’s VetDogs provides its services completely free of charge to the individual.Be sure to watch Sunny on NBC’s TODAY, and follow our other “Puppies with a Purpose” on NBC stations in Los Angeles, Atlanta, Baltimore, and Boston, and on social media.  America’s VetDogs has been accredited by both the International Guide Dog Federation and Assistance Dogs International. ###
Share. Twitter Facebook Google+ Pinterest LinkedIn Tumblr Email