For this special German Shepherd breeder, her dogs and their owners are family forever

It didn’t happen overnight but Moto has his mojo back thanks to his dedicated breeder and co-owner Jacqueline Short-Nguyen, of New Castle, Pa.

The German Shepherd’s journey to the prestigious Westminster Kennel Club Dog Show breed ring Feb 15 is fraught with a tableau of physical and psychological challenges surrounding the dynamics of dogdom.

Short-Nguyen became involved in the breed in 2000 but did not breed a litter until June 2014 when Moto was part of a nine-member delivery.

Eventually, it became time to sell the puppies. “From the conception of Moto’s litter all the way up to their birth and beyond, I communicated with my buyers,” she says. “When somebody purchases a dog from me, they become family. Some of us naturally become closer, others more distant, but we always stay in contact.”

Several months later Moto’s owner messaged the breeder on Facebook, noting she was having several issues with him, from crate soiling to growling at people, including those he knew. She never posted pictures of him on Facebook, although she did so of her other dogs, according to Short-Nguyen. 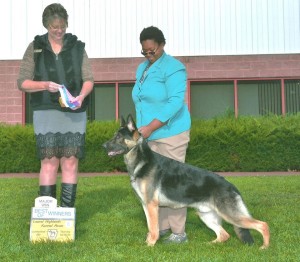 Short-Nguyen poses with Moto after the dog won a major under judge Christina Halliday, at the Laurel Highlands Kennel Association Dog Show in Cumberland, Md.

“I asked her why she didn’t post photos of Moto and she said she didn’t want people to know she had an American show-line German Shepherd,” explains Short-Nguyen. “I tried on several occasions to get together with her, as she lived around three hours away in Ohio. But we couldn’t make it work because of weather and my health issues.”

Finally the breeder and owner agreed to meet at a midway point, from where Short-Nguyen would take Moto home for evaluation.

“When I picked him up, he looked awfully skinny,” she recalls. “German Shepherd puppies, however, can be lanky and awkward. My anxiety, however, tends to ramp up with little provocation, and I had to take a deep breath and calm myself, to try to not jump to conclusions.”

Hours after returning home, she took Moto to her veterinarian, where he weighed only 31.6 pounds at almost 6 months of age. At that point, according to Short-Nguyen, he should have weighed at least 25 pounds more.

“I just lost it and burst into tears,” she recalls. “I didn’t understand how he could be so thin when the person I sold him to knew how to take care of a German Shepherd. She ran a boarding kennel, competed in some dog sports and knew what a healthy puppy should look like.” Making matters worse, the owner was a friend.

What was supposed to be a simple weight check at the veterinary hospital evolved into an emergency appointment for blood work and X-rays. His blood work was normal but Short-Nguyen says the veterinarian commented that any longer in his previous condition might have spelled the beginning of organ failure. He was declared clinically emaciated and was sent home with pain killers for his swollen joints.

While Moto was being X-rayed Short-Nguyen called the owner and informed her the dog would not be returned to her. The contract, signed by both, stipulated that if the dog was neglected it could be repossessed.

“She didn’t fight me on it,” says Short-Nguyen. “She sent funds to cover his initial veterinary expenses and told me, ‘Please don’t be mad at me.’ That just made me sad.”

Back home, Moto was ravenous, of course, but food had to be introduced slowly and several times daily to avoid intestinal upset. With high-calorie kibble and goat’s milk, he gained 12 pounds the first two weeks and today at 19 months old is 69.4 pounds.

While Short-Nguyen rehabilitated Moto she began focusing on finding the now perky dog its forever home. Through Anya Vasilis Dobratz, who lives in Pittsburgh and is the owner of Moto’s father, she connected with Rich Dalzotto and Michelle Linhart, of Venetia, Pa., in December 2014. 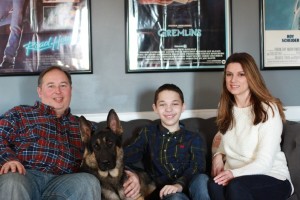 Dalzotto recalls, “When I heard Moto’s story I couldn’t say no to adopting a dog who had gone through such a tough time. I knew we would give him the family home he deserved and that he would make our home better.”

But it wasn’t an overnight adoption. Moto still needed to add weight and rebuild his strength. Consequently, from December 2014 until March 2015 the Dalzotto visited Moto several times – they live about 1½ hours driving time apart — reassuring themselves they made the right choice.

The Dalzottos own a littermate of Moto’s, Dutch, as well.

So how did the new owners become involved in the dog-show world?

“I never intended to own a show dog,” Dalzotto adds. “Moto was adopted with the understanding that he would be a family dog. As Moto matured, Jackie and Anya began seeing show potential in him and discussed with us what it would mean if we began to show him.

“They really couldn’t have made my life as a show-dog owner any easier. I pay the entry fees and that is all. Jackie and Anya train, groom, transport and handle him at the shows. How could I say no to that arrangement? There was no way I would stand in the way of them having an opportunity to showcase one of their dogs.”

Moto spends the majority of his time with the family, which includes his son, John, 12, and daughter, Sarah, 13, who visits on weekends. Moto has interacted smoothly with all, never exhibiting any shy or aggressive tendencies.

On show weekends, Dalzotto drops off Moto with Short-Nguyen or Vasilis Dobratz on Thursday night and gets him back Sunday night, although he is spending more time now with Short-Nguyen prepping for Westminster.

“Moto is full of love and all he hopes for is love back from those around him,” concludes Dalzotto. “It was worth our wait for him, but give all the credit in the world to Jackie for her firm commitment to saving him and getting him turned around.”

For Short-Nguyen, it’s all about family taking care of family.