(Updated September 16, 2014) Our Goodnewsforpets feature writer, Ranny Green, shares a special remembrance in honor of National Preparedness Month. Abbe was a rescue from Hurricane Katrina. Ranny originally shared this story with the Seattle Times, where he was a longtime pets columnist and desk editor at The Seattle Times, retiring in 2008. He continues to be involved in pet-rescue work.  In addition to writing for Goodnewsforpets, he writes a monthly feature and dog-book reviews for www.seattlekennelclub.org. He and his wife live in Tacoma with a 3-year-old Pembroke Welsh Corgi Maggie, a rescue dog. (Andy, noted in the web site story, is deceased.) He is pictured below with Abbe. 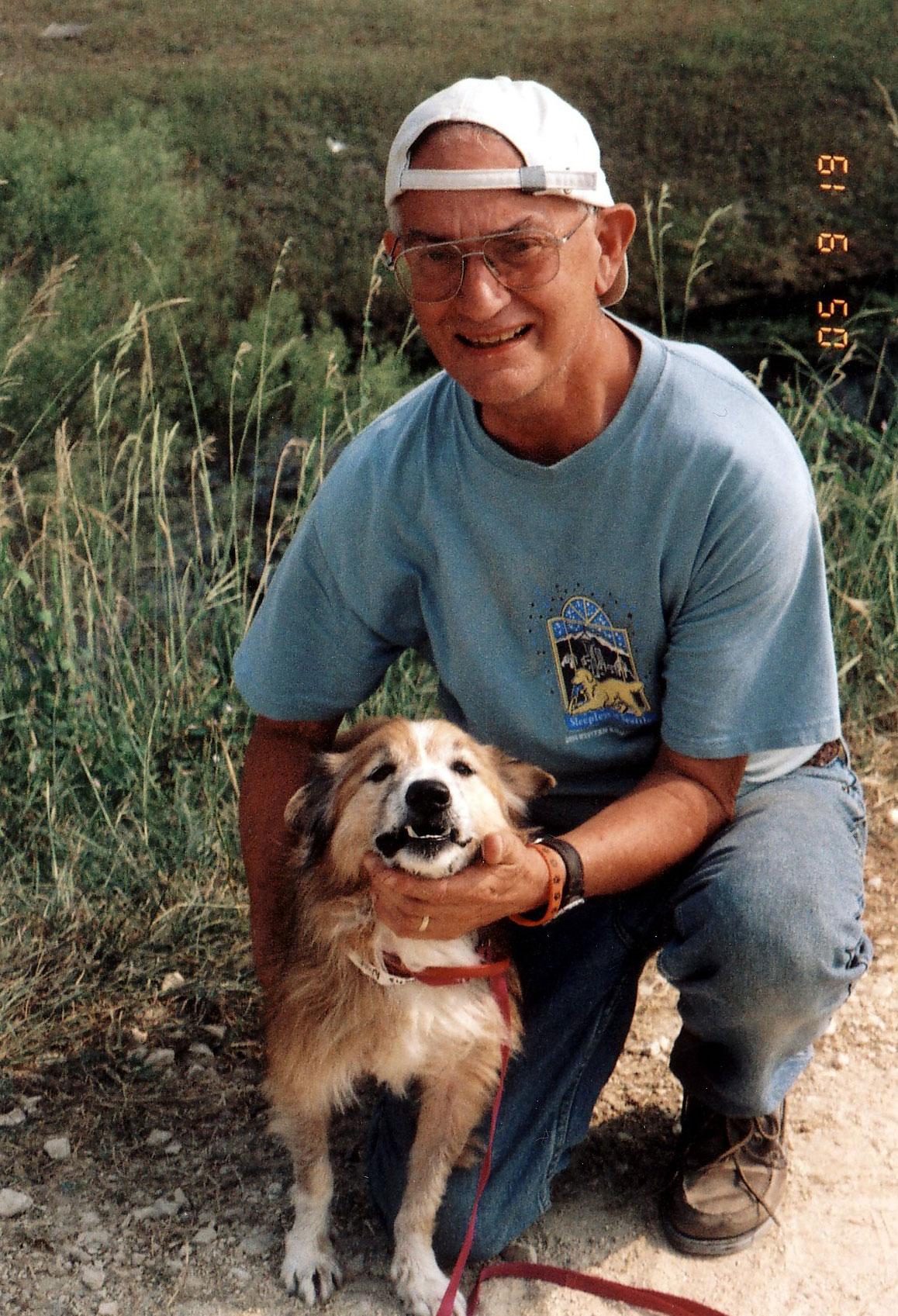 Abbe, my little Southern gal, was a life changer and yet an aberration of sorts. My wife, Mary, and I have always been big-dog people, owning German shepherds, a golden retriever and a former racing greyhound, all rescues.

But when I traveled to Slidell, La., in 2005 to file stories for The Times on pet rescue in the immediate aftermath of Hurricane Katrina, this little sheltie-corgi mix won my heart in a shelter holding more than 1,000 dogs and cats.

Working for and writing about Noah’s Wish’s incredible rescue efforts was my task at hand. That included dog walking, cleaning cages and assorted other tasks. Luck put me in Abbe’s (that was a name we gave her at home) corner of the facility, so I walked her several times daily. Somehow this little gal and I bonded, and when it was time to return home about two weeks later, I sought permission and signed documents to bring her along.

A couple of days before I arrived in Slidell, she had been fished from the brackish water in town, by animal-control authorities, with no identification of any sort. And during my Slidell stay, no one had come to the shelter looking for her, either.

Yet, when it came time to leave for Seattle, I had to sign Noah’s Wish paperwork agreeing to return the 6-year-old, 26-pound dog to her rightful owner should that individual come forth. Another Seattle volunteer agreed to do the same with another dog.

Upon leaving Slidell as Hurricane Rita approached, the two of us drove from Slidell to the Dallas-Fort Worth International Airport, getting buffeted all night by Rita’s intense winds. We arrived at the airport about 3 a.m. and inquired about the first flight leaving for Seattle. Because of the high temperatures that September, airlines were prohibiting dogs from flying.

We told our story to the reservations clerk, and she took pity on us. Not only did she offer to fly the dogs free but she said that because temperatures had dropped that morning there was a good chance we could get a nonstop to Seattle a few hours later. We were overjoyed, since our only alternative was to keep driving toward home, which we had resigned ourselves to do.

We caught a break, made it home safely and little Abbe was greeted at our front door by our resident German shepherd, Andy. Despite a veterinary check-up in Slidell, Abbe underwent a more complete one here, which revealed heartworms. It took two rounds of treatment to rid the worms and it appeared all was well for this little character our adult daughters, Tamara and Stacy, had labeled “Junkyard” (because she chewed up every loose thing she found on the floor) and “Corndog” (because she resembled one). I was beginning to feel like I owned the Rodney Dangerfield of dogs.

All went well for about two years. On a cold November morning, Abbe and Andy went outside to relieve themselves and play. A short time later I called for both. Andy came running to the front door immediately, but no Abbe, which was highly unusual. I waited for a few minutes for her to appear at the front door, but again she was a no show. When I went out to look for her, I immediately spotted her lifeless body beneath her favorite shrub.

There had been no telltale signs of illness beforehand. She had been eating and playing normally. After discussing the matter with our veterinarian the following day, it was determined she had died of congestive heart failure, leaving Mary and I with broken hearts.

Yes, this small dog with a big heart was a life changer. She became my inspiration to become involved in pet rescue upon retiring from The Times in 2008 after 36 years, for most of which I wrote a weekly pets column. And every time I walk past that shrub, I think of the joy she brought into our lives.