*This interview was originally published in 2014.

With all the recent attention on mosquitoes and the health risks associated with the diseases they transmit, Goodnewsforpets wanted to share our interview with Byron Blagburn, MS, PhD, DAVCM. Dr. Blagburn is a noted parasitology professor and researcher and also a past president of the American Association of Parasitologists and the Companion Animal Parasite Council.

Dr. Blagburn also recently helped present phase 2 of a groundbreaking study by John McCall, MS, PhD, at the 2016 AVMA convention in San Antonio. The phase 1 and 2 findings demonstrate the value of topical repellent insecticidal products in a “double defense” protocol for protecting dogs against the vector – the mosquito and use of a preventive against heartworm disease.

Goodnewsforpets: I found it very interesting that mosquitoes transmit the most diseases worldwide, can you explain that?

Dr. Blagburn: In North American and Eurasia, ticks can rival mosquitoes. But in most parts of the world, mosquitoes transmit more dread diseases than any other bug.

Goodnewsforpets: And why is that? Is that because of the large bodies of water?

Dr. Blagburn: It’s because of the diversity of species, the numbers of mosquitoes that there are, and the fact that they’ve adapted to their abilities to develop in dozens and dozens of different environments. We could talk for ten minutes about the different places you can find mosquitoes. People always laugh at me, they say, “Just come out to my back yard, I have an old tire, you can get all the mosquitoes you need out of it.” So, there are some that breed in old tires, you know, temporary water. Some breed in tree holes. Some don’t even develop until water reaches a level that the eggs then sort of rejuvenate and hatch. They are remarkable creatures. They’ve adapted all over the world, in virtually every habitat. And they’re flying insects, which means they’re highly mobile, so they can go from place to place much more quickly and faster than a tick can, or a flea can, or certain other pests. We don’t like them, but we have to appreciate them as scientists because they are very challenging, not only from the aspect of disease transmission, but from the aspect of sheer numbers, adaptation, diseases they carry.

Goodnewsforpets: Are mosquitoes the particular type of insect that you’re most interested in now?

Goodnewsforpets: The American Heartworm Society came out with the new guidelines. There are many different areas about the guidelines that are new. What do you feel is the most important area that veterinarians and pet owners need to pay attention to for their pets?

Dr. Blagburn: Prevention. Use of preventive products. Number 1. Number 2, Testing. Testing annually. Testing every pet that you can, annually. And then, tailoring product selection to client capability and pet habit. And that might be topical, it might be oral, it might be injectable; it might be every six months, it might be once a month. So, prevention and testing, I think, are the two most important things. If I were to add a third, I would say adjuncts to those two methods of heartworm prevention. That is, education, understanding things like how heartworm is transmitted, and how we can mitigate transmission by our behavior.

I mentioned in other lectures screening in kennels to exclude mosquitoes. Using products, since you have to control fleas and ticks, use those products that also have claims against mosquitoes. We can’t count on them preventing heartworm infection 100 percent of the time, but when you combine compliant prevention, you combine habit in terms of the way you interact with your pet and the environment, and you use these other modes of prevention from a mosquitoes attack, then your chances of preventing heartworm infection increase markedly.

Goodnewsforpets: What do you think the steps are that a pet owner should take to protect their pet from heartworm?

Dr. Blagburn: See your veterinarian first. Have your pet tested. And then, place your pet on a heartworm preventative that is suggested by your veterinarian. Your veterinarian knows your pet best, and your veterinarian is also going to assess other parasites that you have to deal with. They may be internal, they might be other external. And we keep mentioning mosquitoes, but I’m a strong proponent of using this multi-modal strategy, using products that we have to use anyway, but selecting those products that enhance other strategies for preventing disease.

Goodnewsforpets: What is the role of repellants in this recommendation?

Dr. Blagburn: “Repellants” is an interesting term. What it means, in its simplest form, is it causes an agent to move away from a treated animal or surface. So, if you had a repellant on you, and there are mosquitoes all in this room, they would move away from you. There would be this zone around you where there wouldn’t be mosquitoes. Well, there wouldn’t be nearly as many mosquitoes as there could be. So, they can act in two ways. They can be sort of volatile, or they can act when the agent or the bug contacts you. In the case of ticks, the repellant on the skin, the tick climbs on and smells it. It’s got two little noses in its front legs, and it smells and says, “Oh, I don’t want to be on this animal,” and backs off.

But a repellant acts different on mosquitoes. So, it approaches you, and that repellant attaches to little receptors on their antenna, so it sort of blinds them. It’s like putting a blindfold on them so they can’t find you.

Goodnewsforpets: Can you explain to me exactly what a vector-borne disease is?

Dr. Blagburn: A vector-borne disease is any disease that’s transmitted by a vector. Now, that might seem simple, but the term “vector” can be any number of things. It can be an insect-carrying agent, it can be some fomite. A fomite is a non-living thing that vectors a parasite from soil to a host. So, a vector-borne disease, in its strictest sense, and most of the time is used to define an agent that is transmitted, usually by a bug – I’m using that term in a broad sense – from one animal to another.

Dr. Blagburn: You’re exactly right. The mosquito is the vector. 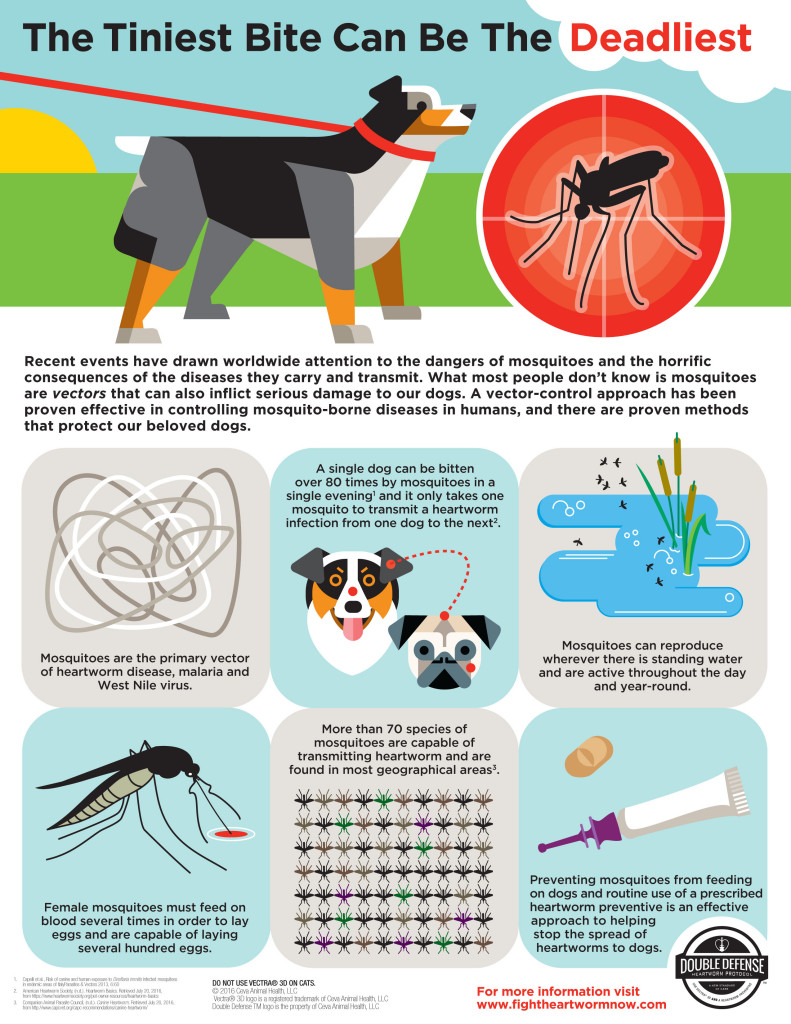 Goodnewsforpets: Can you explain how a mosquitoes infects a pet with heartworm?

Dr. Blagburn: First of all, the mosquito has to get infected, so there has to be a source animal, and that’s the dog. So, the dog has circulating baby worms in its blood. We call them microfilaria, but that’s a complicated term. Just imagine all these tiny little baby worms, circulating in blood. So, the mosquito bites that dog, and when it takes up a blood meal, it takes up some of those baby worms. Once inside the mosquito, those baby worms grow up. They go through tumults, or changes, until they develop into a third stage. That third stage then migrates back to the mosquito’s mouth parts, so that when the mosquito takes another blood meal, the ones that are now mature and infective enter the new host. And once they enter the new host, they’re carried by that host blood vascular system to the heart, where they grow up. So, mosquitoes are necessary in the life cycle. You cannot transmit heartworm from one dog to another just by direct contact. You have to have that vector.

Goodnewsforpets: How long does this blood meal take?

Dr. Blagburn: Minutes. When we feed in the laboratory, we tend to feed a little longer than that, 15 to 30 minutes. But remember, the mosquito can feed multiple times on the same animal. We’re talking about female mosquitoes. Male mosquitoes are well behaved little creatures. They actually feed on flower pollen, and they’re not interested in blood at all. It’s the females that are the blood feeders. Why? Because the females have to lay the eggs. They have to propagate, and they need blood to lay eggs.

Goodnewsforpets: I did not know that. So, is that what makes a mosquito bite hurt, is the female taking the blood meal?

Dr. Blagburn: Well, first, she sticks her little pointed mouth part in you, and that’s sort of a sting. But when she’s feeding, she’s got the salivary secretions, just like we have saliva. And in her saliva, she has irritating substances. So, those irritating substances, combined with that mechanical stick, create that little bump that you see as you rub and scratch it.

Goodnewsforpets: That is very interesting. Now, we’re going to talk about oral products. So, do oral products require a mosquito to take a blood meal?

Goodnewsforpets: How does a topical product compare to a product that’s taken orally?

Goodnewsforpets: What is this term called “Fast Kill?”

Dr. Blagburn: It means exactly what you just said. How quickly does either the flea, the tick, or the mosquito die, after it is exposed to whatever agent you’re using, whether it’s systemic – one that’s in the blood – or whether it’s a topical. So, your next question, I would bet, would be, is fast kill a good thing? And the answer is, yes.

Goodnewsforpets: Is there anything else you want to tell me about this fascinating topic of how to kill these mosquitoes and get them off your pet?

Dr. Blagburn: I would just repeat that I think we probably under-researched certain of these parasites that we could perhaps exploit more. Mosquitoes would be one. One thing about mosquitoes is, pet owners know mosquitoes. Pet owners know fleas, they know ticks. They know mosquitoes, too. If we can encourage them to focus on trying to control mosquitoes as much as they try to control fleas and ticks, then we’d be a step further along the way to providing this multi-modal therapy that I think is the way of the future. It’s using multiple strategies to control a parasite. It increases your chances. It’s like putting good tires on your car, keeping your car in good running, wearing a good seatbelt all the time. You’re ensuring the likelihood that your trip will be a safe one because you’re adding all of these factors that increase safety.

Dr. Blagburn: No, just that I love parasites. Love to study them.

Find out more about the Double Defense Protocol here or download our educational infographic on the dangers of mosquitoes here.