REGISTER TO RECEIVE NEWS UPDATES >>
You are at:Home»Blog Posts»I Forgot About Uno
By Lea-Ann Germinder on February 16, 2015 Blog Posts 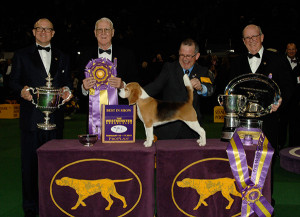 I admit it, last night at the Garden I forgot about Uno. I had seen Swagger the night before at his first primping, I had seen him again before he hit the show floor and I was with the crowd cheering for that huge fluff of old English Sheepdog. I didn’t even know at the time “Swagger” had finished second at Westminster in 2013. All I knew was I could not get enough of that snowy white and grey coat, that bounding gait and that face that filled the screen.

My usual coverage of Westminster has for years been behind the scenes at press briefings along with the Dog Writers Association of America members, hobnobbing with the media folks in the know, including Ranny Green and former Goodnewsforpets editor Julie Lux keeping me straight while Westminster Kennel Club Communications Director David Frei works his usual 25 years of magic both on and off the announcer podium. This year was different. I had determinedly decided for our full team to partake in as much of the show as possible – from pre-show coverage to Meet the Breeds to Agility Championships to Breed Judging to Behind the Scenes Primping to Cheering in the Stands. We had a full array of dogs to choose from, but Swagger was my own favorite. Then came the selection of Miss P. as Best in Show. I and the crowd were stunned. I attended the press conference and was still not convinced.  Then, when David Frei was asked about an upset, he calmly replied, ‘There was no upset.”

Then I saw his quote about Uno being the best loved Best in Show dog in 25 years.  I had forgotten! Uno was an unbelievable gift. A charmer all around. Everyone loved Uno. What’s not to love about a beagle? And a charmer at that. Sure she’s a quiet one, but something tells me she will be loved just the same. I’m looking forward to seeing the divine Miss P. make the rounds. Sorry Uno, you’re not numero Uno any more. Make way for Miss P!