REGISTER TO RECEIVE NEWS UPDATES >>
You are at:Home»WVLDI»Women in Veterinary Leadership From An Historical Perspective: An Interview with Dr. Don Smith
By Good News For Pets on July 31, 2014 WVLDI, WVLDI Columns 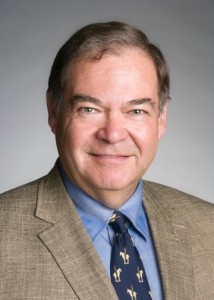 Every veterinarian has a story about how they became a veterinarian. So, what’s your story?

My story is a little bit different than probably the average veterinarian. I went to agricultural college in Canada, which is where I’m from, with the intent of going back to the dairy farm or into the dairy industry in some way, whether it was commercial aspects or agricultural extension. Somewhere along the line, during my undergraduate education, I met a young woman who later became my wife, and she encouraged me to consider veterinary medicine. I said, “You know, Doris, I’m not really fond of veterinarians. I don’t find them particularly humane towards dairy cattle, not nearly as much as father, who taught me everything I had known about dairy cattle.” But, nevertheless, I applied. I remember sitting down at the interview at a table with six or seven gentlemen, each with their copy of my resume in front of them. They’re all looking at it, and the chair said, “Well, Don, why do you want to become a veterinarian?” And I said, “Well, I’m not sure I do.” And that got their attention. And actually, I wasn’t sure! After I was accepted, it was a very difficult choice to become a veterinarian-=-go to veterinary college–or go back to the farm. I accepted, and I became a veterinarian. That’s my story.

You have a long, illustrious career as dean of the Cornell College of Veterinary Medicine, but tell us how you got involved with the Women’s Veterinary Leadership Development Initiative.

I was dean at Cornell from 1997 to 2007. During that period, I became interested in the history of veterinary medicine. The greatest lesson of history is we don’t learn from history. I decided that if we were going to learn from history, we should do it through people. So, I took great interest in the people, especially older people, who had come to the profession, becoming veterinarians in the 1920’s and 1930’s, and I started to get their stories. I knew a lot of them, because when you’re dean, you get to meet a lot of people. I remember in June 2007, we were listening to a man whom I knew well, who had graduated in 1934, hold court with the students. A blind man in a wheelchair, holding court with the students about what it was like to have radiologic burns on his hands back in the early 1940’s. The wife of one of our older alumni came up, and she put her hand on my shoulder and said, “Dr. Smith, you’ve got to get their stories.”

Within about two weeks, I had a plan to interview as many of the graduates of the 1930’s from Cornell as I could: there were about 20 at the time. I started with very little money, but that wasn’t an issue. I traveled on my own. I interviewed probably about 10 or 11 of them, either directly or through their surviving spouses. And that launched a whole initiative on understanding the history of veterinary medicine. I started a course on the history of veterinary medicine, which was centered on those stories. Now, I’m in the fifth year of teaching that course.

In the process of that, I started to learn about the early women. I gave my first paper on women of veterinary medicine in about the year 2000. I described the stories of the women who graduated from Cornell between 1910 and 1949. And that went online, and many of those women I knew very well in fact. I know their stories about anti-Semitism, anti-gender issues and what it was like. I was very interested in that. Over the last probably five years, I’ve been working on issues associated with people struggling to become veterinarians and what it takes to gain access to become a veterinarian.

About two years ago, when the Kelly Report (the Workforce Report) came out, I saw an issue that disturbed me, and that was the issue of associates making less than owners in practice. And, of course, women make less than men. We all know that. But when I saw that associates who were women make less than associates who are owners – and as we know, 80 percent of the graduates now being women — I thought, we have to get to those women who are going into practice and somehow figure out how more of them can become owners, or we’re going to be like Walgreen’s, where veterinarians just become, for the most part, employed by somebody else. I met with a couple of people, one of whom was Julie Kumble, who has since become my associate.

This was about 18 or 20 months ago and we started interviewing women leaders in practice, in organized veterinary medicine, in industry, and in academia. Now we’ve interviewed probably about 40 people. About six or eight months into that project, a year ago this July (2014), I wrote a blog called Five Days in July, which was about the issues associated with Karen Bradley, the House of Delegates, the House Advisory Committee. And at end of that blog, I said, “When we come to the AVMA meeting in 2014, we think – I think – things will have changed.” And I wrote a follow-up blog at about the 3rd of January, 2014, describing how things have changed, much of which has been related to the organization of this group, which is associated with the promotion of women leaders.

What intrigued you so much that you took it upon yourself to do these interviews? What was so compelling about this project?

There are two aspects of the answer to your question. One is that it was a logical extension of the interviews I had been doing. I have the largest collection of unique interviews with veterinarians from the 30’s and 40’s, and they’re annotated, they are heavily edited. It’s a precious resource. And I see this present work as an extension of that. That was a very, and continues to be a highly time-consuming effort, and I could no longer invest that amount of time into each interview. But, what we’re doing now is a condensed version of that, gleaning out some of the really important aspects of it, and putting it into the whole picture of women’s leadership. So, my role in that is as an amateur historian, as a veterinarian interested in history. My associate, Julie, is coming at it from the standpoint of women broadly defined in politics, in local politics especially, in issues associated with the development of women leaders in communities. And so, she brings an expertise from the professional side of gender studies. I bring the expertise as a veterinarian, as a former leader, former dean, and we are meshing our work with the WVLDI, of which we are a part.

Ceva is WVLDI’s first industry sponsor. What is the significance of that, and how do you think that will help move the organization forward?

Well, sponsorship, of course, is 95 percent priorities, and it’s 5 percent money. So, when you have a sponsor whose orientation, ethics, and momentum, which has goals that are tying into your goals, that’s what you want. In other words, you want to establish associations with people with whom you can have a mutual program, where you see that you each bring things to the table, and you’re moving the momentum forward. Money obviously helps.

Do you see that with Ceva?

Absolutely. With Ceva, what I see is a chief operating officer who articulates the need for the priorities of having women and other representation in the company, for all the right reasons. The fact that there’s $15,000 this year behind it is wonderful, but the greater situation relates to the commitment and the shared goals, shared values.

What is your aspirational goal for WVLDI in 2014?

I guess my number one aspirational goal is that it will no longer exist in three years.

Do you think that’s achievable?

I think with the momentum it’s had this past year, it is very achievable.

There has been a sentiment expressed that women veterinarians coming out of veterinary school do not want to own practices. I’ve heard that over and over again. Is there information out there that validates that point?

Let me give you one piece of information, which is not by any means representative of a study, which I would cite. But, when I sent out to all the students at Cornell, veterinary students, information about this course that I was planning for sometime in March, a Saturday course in order to have access to students. I said it would be a course in women’s leadership and I described what the course would involve. I stated that, in order to express interest in the course, I want you to write to me a short paragraph, telling me why you want to be involved in or why you’re interested in the course. And I got about 40 inquiries; I was surprised. I know the students at Cornell pretty well. I was surprised at the number who said, in different ways, in different forms, with different logic behind it, “I want to be a practice owner”. I’ve since asked them to elaborate on why they want to take the course so that their stories can be shared amongst the other members taking that course. I think there’s – Well, I don’t want to say…I don’t want to presume I know, but it could very well be there is more interest than there would have been five years ago.

Let me follow up and say, I wrote a story about that, a blog, and included several quotes a couple pictures of the students, and that came out about two months ago. And there are some pretty interesting quotes in there.

Is WVLDI an organization to help women become the next leaders in the veterinary profession?

I think there are two ways to approach that question, and whether this organization is able to tap those markets in a way in which you’re asking, I think depends on how we set our strategic plan. I believe that the two cohorts we have to deal with are the student cohort. Most students go into companion animal practice because they want to cure an animal, because they look at the human-animal bond as something they want to be part of. Now, veterinary medicine has to change. It has to adopt the view that we, as veterinarians, look after animals, AND ALSO animals’ relationship with people, with human health. And until we realize that paradigm, we will continue to see a profession of 100,000 people, earning $85,000 a year. So, that’s one issue.

The second issue, we have to recruit different people to the veterinary profession. We have to recruit people who are interested in human health, animal health, business, public relationships, and public policy. We should not restrict our recruitment of people who want to cure animals. And, so, I see those two paradigms as the functional ones that our group should address.

Now, to some extent, we can work strongly with people who are relatively new graduates, as we would see in any program. But, I think, unless we go back and recruit different people for the profession, as well as the same ones we’re recruiting now, we will not get the extent of success that we really need.

What do you think are the barriers to women in academia? For example, women wanting to become a dean of a veterinary school, or advance in academia?