REGISTER TO RECEIVE NEWS UPDATES >>
You are at:Home»Pet IQ»When will the dedication ceremony be held for the U.S. postage stamps featuring military working dogs?
By Joe Germinder on May 6, 2019 Pet IQ 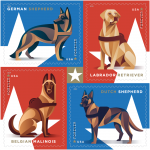 According to the U.S. Post Office, the first day ceremony of military working dog stamps will be held August 1, 2019 in Omaha Nebraska. The new 2019 stamps feature the German shepherd, Labrador retriever, Belgian Malinois and Dutch shepherd — that now commonly serve in America’s armed forces. Each block of four stamps will feature one stamp each of the four breeds.

The background of each stamp features a detail of a white star. A star appears in the center of each block. The stylized digital illustrations are in red, white, blue and gold to represent the American flag and patriotism. The art was created by DKNG Studios. Art director Greg Breeding designed the stamps.

Be sure to check back at usps.com for updates. Special dedication events are free and open to the public. The pets stamps will be on sale at the event and are available online at http://usps.com/stamps as well as at Post Offices everywhere.

“More than half of all U.S. homes have at least one pet, and that number increases every year. The most common are cats and dogs, but all types of pets provide love, happiness and companionship for their owners,” said Cardoza. “The bonds we create with animals improve our physical and emotional well-being and our pets truly become members of the family.”

Though cats and dogs are the more traditional choice, pets come in all shapes and sizes. Small mammals, like hamsters, gerbils and mice, are popular choices for many people, especially those with limited space that might not accommodate larger animals. Slightly larger mammals, like rabbits, guinea pigs and chinchillas, have also become much more prevalent in American homes, particularly for families with older children.

The Postal Service receives no tax dollars for operating expenses and relies on the sale of postage, products and services to fund its operations. Visit usps.com and facts.usps.com.