Even during the last weeks of summer, it’s important to remember children and pets are at greater risk of being infected with Lyme disease and other tick-borne diseases such as anaplasmosis, ehrlichiosis, or Rocky Mountain Spotted Fever.

Because people and their pets often spend time in the same environments where Lyme and other disease-transmitting ticks are found, the American Veterinary Medical Association (AVMA) and the American Academy of Pediatrics (AAP) are working together to offer advice to households with children and pets.

​Lyme disease is an infection caused by a bacterium known as Borrelia burgdorfori. It is spread by the bite of the tiny black-legged tick, which is found in forests or grassy, wooded, marshy areas near rivers, lakes or oceans. People or animals may be bitten while hiking or camping, during other outdoor activities, or even while spending time in their backyards.

​This disease appears in specific areas of the United States, including southern New England states; eastern Mid-Atlantic States; the upper Midwest, particularly Wisconsin and Minnesota; and the West Coast, particularly northern California. In analyzing a patient’s risk of having or contracting Lyme disease, physicians and veterinarians in other areas of the country will want to know if their patient has visited a place where the disease is found. The United States Centers for Disease Control and Prevention (CDC) has a map detailing confirmed cases of Lyme disease throughout the years. 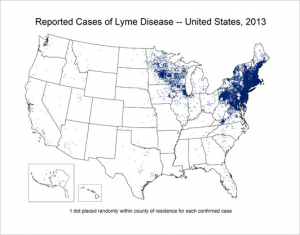 ​In animals, Lyme disease usually does not cause any clinical signs at all. Symptomatic dogs with Lyme disease might have lack of appetite, lameness, and joint swelling. Recurrent lameness also is possible. The involved extremity may be tender due to joint inflammation that lasts from days to weeks and migrates from one extremity to another. Also, animals may experience fever and decreased activity.

​If a child or pet is diagnosed with Lyme disease, it is likely that other family members or pets also have been in an environment that could lead to exposure. Therefore, the initial case of Lyme disease in a household should serve to flag the risk of exposure and suggest a need for other family members or pets to notify their physicians and veterinarians, who can advise about further evaluation or testing.

​There are many things humans can do to avoid exposure to tick bites, including: avoiding areas where ticks are found; covering arms, legs, head and feet when outdoors; wearing light-colored clothing; using insecticides; and checking for ticks once indoors.

​Likewise, people with pets are encouraged to speak with their veterinarian about tick preventive products, to clear shrubbery next to homes and keep lawns well maintained, and to check for ticks on themselves and their animals once indoors.

​Since it was named after a number of cases were identified in Lyme, Conn., in 1975, thousands of cases of the disease have been reported in humans and animals across the country and around the world. By knowing about Lyme disease and how to prevent it, you can help keep all members of your family—human and animal—safe.

​More information is available from the AAP, AVMA and the CDC.

*Good News for Pets Note: Also check out the Why Wait For The Bite Campaign on GNFP for valuable information and options in managing risk.

Photo by Dennis Sitarevich used under the Creative Commons License.