REGISTER TO RECEIVE NEWS UPDATES >>
You are at:Home»News»Valentine’s Day & Your Pets
By Good News For Pets on February 12, 2015 News, Pet News, Seasonal

No one wants to spend Valentine’s Day in the dog house, but as it turns out, this year it might not be the worst place to be! According to the recently released survey conducted by the National Retail Foundation, a record amount of pets are included in people’s Valentine’s Day spending for gifts.

In the annual consumer spending survey, more than 20% of people say they will include a pet in Valentine spending. That means on average, the pets will get about a $5 gift. While special, it turns out the amount spent on pets is just kibbles compared to the bottomline. Nationwide spending will be about $703 million, and that’s without factoring in what will be spent on chocolate (a definite NO for pets) and flowers. The average person is expected to spend $142.31 on Valentine’s Day gifts, according to the study. That up from last year’s report of $134, and also a record high for the yearly survey.

Interestingly enough, men took the lead when it came to spending on their pets for Valentine’s Day with 22.2% reporting they will be picking something up for their furry companion compared to just 20.1% of women. Even more surprising, men will be spending more with a reported $7 average, with women spending on average only $3.50 on pets. 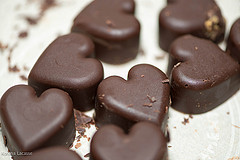 Photo by Korona Lacasse, used under a creative commons license.

Chocolate and flowers staples of the the holiday. Chocolate, while delicious to humans, can pose a very real danger to pets. Chocolate toxicity is a very serious and potentially life threatening condition that can cause pancreatitis, epileptic seizures, heart arrhythmia, severe vomiting and death.

Symptoms of chocolate toxicity in pets

While dogs are more likely to eat chocolate, since cats can’t taste sweetness the threat still remains as any pet can be curious.

Chocolate toxicity in pets can persist for 72 hours. Veterinary treatment is strongly recommended within the first two hours if you suspect your pet has consumed chocolate. Induced vomiting under your veterinarian’s care can help save your pet’s life.

Make sure your Valentine’s Day stays sweet.. and safe. Start by keeping any type of chocolate or product containing chocolate out of reach for curious cats and nosy dog noses. The best place would be in closed cabinets/drawers or the refrigerator/freezer.