REGISTER TO RECEIVE NEWS UPDATES >>
You are at:Home»Media»Books»The Dogs of Newtown
By Ranny Green on October 2, 2015 Books, Media
This review is by Ranny Green and originally ran on the Seattle KC website October 1, 2015. 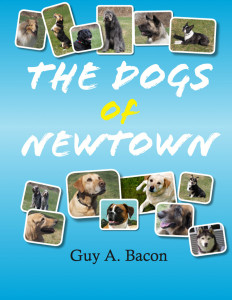 No one can capture the heart and soul of the therapy dogs of Newtown (Conn.) like a youthful recipient. And no better person than 11-year-old Guy Bacon, whose sister Charlotte was one of the 26 victims of the Sandy Hook Elementary school shootings in December 2012.

A beneficiary of the hands-on goodwill dispersed by these four-legged ambassadors from around the U.S., Bacon says in the Introduction of his two-year project, “The Dogs of Newtown,” dedicated to his sister, “this book is about some of the most special therapy dogs that visited me and my friends at school (Reed Intermediate School) and helped wipe the tears away from our faces.

“I was surprised to see the dogs of on the first day of school in January 2013. I remember that I was standing in front of my desk when Drago walked into our classroom. He was the first dog that I saw and got to pet. I felt very calm and relaxed whenever I touched any of these dogs’ soft, fluffy fur. They also made me very comfortable when they would lick and nuzzle me back.”

Young Bacon gives thanks to his fifth-grade teacher, Karen King, for assisting him through the writing and organizational corridor. The inspiring educator was also asked to write the Foreword, where she emphasizes the absence of a teacher guide for dealing with the aftermath of mass shootings and deaths.

“We were feeling the same sadness, fear and confusion as our students,” writes King. “Thankfully, we were not on our own. With the teachers in the school hallways those first mornings were about 10 comfort dogs and their steady, generous volunteer owners. They stood among us as the first students headed our way.

“‘There are dogs in school!’ were the first words I heard and a hundred little hands reached out to touch, pet, hug, or cuddle a dog. And then a flood of questions began.”

King, thinking someone should write a book about these dogs, recalls Bacon’s stirring interaction with the four-legged visitors in the Foreword: 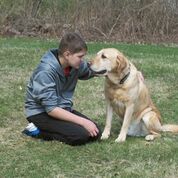 Wallace, a four-year-old Labrador Retriever, loves being petted and having his belly scratched, according to Guy Bacon, author of “The Dogs of Newtown.” Wallace was born in Scotland, and, according to Guy, was “supposed to be trained to hunt birds but wasn’t sure that’s what he wanted to do.” Wallace became a therapy dog instead.

“His first days back at school were spent sitting, kneeling or sometimes lying next to a dog—his notebook open, his pencil poised, his tongue curled over his lip and his brows furrowed in concentration as he conducted interview after interview with comfort dogs of all sizes and breeds. This was time well spent. The dogs were a special gift for Guy, just as he was for them.”

With a youthful intimacy and brief, zippy style, Guy introduces the reader to his special friends Drago, Siena, Kona, Nessa, Annie, Kipper, Yankee, Daisy, Wallace, Spartacus, a second Daisy, Winston, Ruby, Skylar, and Arwen. Three of these have died since their days at Reed, and Bacon honors each with an illustration accompanying photos sent by their owners.

Bloom, an official photographer of the Westminster Kennel Club for years and whose photographs have appeared in such publications as Life, People and Smithsonian Magazine, became involved in the book project through a friend, Sandy Cornell, who owns therapy-dog Kona, a Boston terrier with which Bacon cemented an everlasting bond.

“Sandy learned that Guy was writing the book and photos were needed. Since I’m a photographer who specializes in our relationships with the dog and its importance in our lives, she asked me to help.”

Bloom visited Newtown four times—twice to check the location and twice to shoot the portraits in April. “The dogs, as expected, were well-behaved and enjoyed the time we spent with them,” says Bloom. 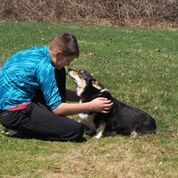 Nessa, a Pembroke Welsh Corgi, is a gentle dog that likes to give kisses and cuddle, says Guy. “What I like about Nessa,” he adds, “is that she is small, but mighty at the same time.”

“Guy is an amazing young man and greeted each dog as if it was a rock star. He knew them all intimately from the days they spent at school. Many special moments occurred during the photo sessions but most important was to see Guy bonded with these dogs that gave him a special gift when he needed it most. Writing this book was his way of giving back to them.”

For Bacon, the photo shoots resembled a family reunion with the comfort dogs, some of which he had not seen in almost two years. “I was Mary’s assistant for the day,” he explains.

The most enjoyable aspect of the project for the young author was selecting a design for the book. “I like that it is so colorful and kid friendly,” he smiles.

JoAnn Bacon, Guy’s mother, recalls the evolution of “The Dogs of Newtown.”

“In the spring of 2013, Joel (her husband) and I began discussing publishing a children’s book about Charlotte and our dog Lily (a yellow Labrador retriever). One day after Guy listened to one of our many discussions about ‘Charlotte’s book,’ as we called it, he mentioned that maybe he should write a book of his own. It was surprise to both Joel and I, but we encouraged him to explain. He was not sure what to write but thought it should be about the therapy dogs that had been visiting Reed.

“In the weeks that followed Guy went to school prepared with a notebook for the interviews he was conducting. At the end of the school year there was a Therapy Dog Appreciation Day in town. Guy and I attended with our cameras and photographed the dogs, but decided later that we would need to find a professional photographer.

Enter Bloom. “She and Guy worked together on the photo shoots, and it was so fun to see the pride and ownership Guy was taking in the project.”

This summer Guy and his mother worked with a graphic designer on the layout, with the youngster selecting the order of the pages, colors and photos, in addition to writing the Dedication and Acknowledgements.

“I was his administrative assistant,” she laughs. “It was incredibly rewarding to see him flourish, but most important I loved the time we were spending together. We bonded over therapy dogs, which was just another testament to the work of these beautiful animals.”

And somehow you feel that young Charlotte is smiling up above as her family puts a special earthly footprint on her memory again—this time celebrating the dynamics of dogdom in the heartwarming “The Dogs of Newtown.”