(WASHINGTON, D.C. JULY 19, 2016) – The Human Animal Bond Research Initiative (HABRI) Foundation announced today the results of a long-term study to explore the effects of pet dogs on families with children with autism spectrum disorder, just published in the Journal of Veterinary Behavior. 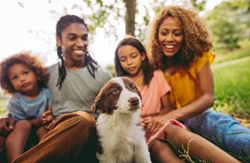 The findings of the study showed significantly improved family functioning of families with a dog compared to those without. The study also found a reduction in parent-child dysfunctional interactions among families that had a dog.

HABRI Executive Director Steven Feldman said: “Parents of children with autism can experience increased anxiety and stress, and now we have strong scientific evidence to show that pets can have positive effects on these quality-of-life issues. Families with an autistic child should consider pet ownership as a way to improve family harmony.”

This is among the first published studies of more than a dozen HABRI-funded research projects examining the effects of companion animals on human health. The study followed up 2.5 years later with families involved in a previous study on the short-term effect of a pet dog on families of a child with autism, in order to determine the longevity of the benefits of pet ownership. The study demonstrated that initial results of reduced family difficulties lasted years beyond the early stages of acquiring a dog, and that stress levels continued to experience a steady decline.

“Stress associated with parenting a child with autism continued to decrease among dog owners over time, but we did not see the same reductions in families without a dog,” added Prof. Mills. “This long-term follow up study highlights the potential benefits of pet ownership in bringing long-term improvements to the lives of families living with a child with autism.”

Founded by Petco, Zoetis, and the American Pet Products Association and supported by a growing number of organizations, the HABRI Foundation maintains the world’s largest online library of human-animal bond research and information; to date has funded more than half a million dollars in independent research projects to scientifically document the health benefits of companion animals; and informs the public about human-animal bond research and the beneficial role of companion animals in society. For more information about the HABRI Foundation, visit http://www.habri.org.