REGISTER TO RECEIVE NEWS UPDATES >>
You are at:Home»Media»Books»“Silent Creed”
By Ranny Green on September 15, 2015 Books, Media
This review is by Ranny Green and originally ran on the Seattle KC website September 1, 2015. 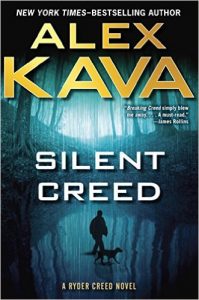 Boasting more twists and turns than a Disney World rollercoaster, the absorbing novel centers on a deadly mudslide in North Carolina in which former Marine Ryder Creed and two of his K9 CrimeScents dogs, Bolo, a Rhodesian Ridgeback, and Grace, a Jack Russell terrier, were brought in to search for survivors and deceased. In the process, he finds himself working with FBI agent Maggie O’Dell, with whom he had partnered in previous assignments.

After Creed, whose naturalness remains a beguiling virtue, and Grace find and save an elderly woman in the muddy setting, the scenario takes a dramatic turn into a crime scene when two staffers from a buried secret government research facility are found murdered.

Add to that Creed and multi-tasker Bolo’s near brush with death while buried deep in the mud and you have all the ingredients for a thriller. Later O’Dell helps rescue Creed from a raging stream and moments later Bolo from a concrete boulder in the same waterway, endearing herself more to the thankful dog handler.

Middle chapters ping pong between Senate hearings in Washington, D.C., and harrowing rescue work in North Carolina. The hearings are led by Sen. Ellie Delanor of Florida, who is trying to root out the secrecy surrounding long-term Army chemical tests in the 1960s and ’70s, which became known as Project 112 and Project SHAD, in several U.S. cities to which the highly classified North Carolina facility appears to be linked.

The purpose of these tests, according to the Department of Defense, was to identify the United States’ vulnerabilities to attacks with chemical and biological warfare agents. These tests involved a chemical or stimulant of a chemical that was sprayed from military jets over cities or a ship. In the latter, sailors were trained how to decontaminate a ship after a test and how to conduct air samplings.

As the storyline builds toward a combustible conclusion with poignant flashpoints, fragmentary encounters and an intoxicating blend of tension and passion, the reader finds himself/herself racing for the finish line with gusto yet yearning to get his/her hands on the next moving Creed story of true grit.

A Seattle Times pets columnist and feature writer for three decades before retiring in 2008, Ranny Green writes monthly features and book reviews for the Seattle Kennel Club. He is also the former president of the Dog Writers Association of America, a five-time recipient of the DWAA’s columnist of the year award and a six-time winner of the DWAA feature writer of the year for newspapers over 150,000 circulation. He is also a member of the prestigious DWAA Hall of Fame.