REGISTER TO RECEIVE NEWS UPDATES >>
You are at:Home»Media»Books»Rescue Smiles: Favorite Animal Stories of Love and Liberation
By Good News For Pets on January 11, 2018 Books, Media

Rescue Smiles: Favorite Animal Stories of Love and Liberation is a 2017 Dog Writers Association of America Maxwell Medallion winner in the category of Book – Human Animal Bond. Find the list of all the 2017 DWAA Writing Competition winners here. 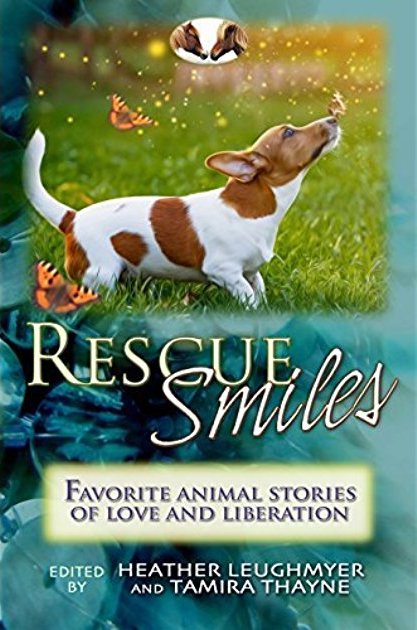 The heart of the animal rescue world lies in its stories–of freedom, of love, and of sacrifice by those who not only acknowledge but embrace the human-animal bond and its wondrous gifts.

In our first rescue story compilation, Who Chains You Books is pleased to offer a look into the emotional lives of rescuers and the living beings they hold dear. Join us for the heartwarming anecdotes, as Cinnamon steals Spice’s puppies, Alice steals everyone’s shoes, and a host of other animals conspire to steal our hearts.

Through these tales, you’ll get a behind-the-scenes peek into the relationships between rescuers and not only dogs and cats, but horses, goats, pigs, rats, mice, and birds, in this delightful first installment of Rescue Smiles.We hope you’re as captivated by the kinship between human and animal as we are.

Heather Leughmyer is the author of Adopting Adele, A Rat’s Guide to Owning a Human, and If Your Tears Were Human, and co-editor of Rescue Smiles. She is also the founder of Happy Endings Rat Rescue, and a graduate of Indiana-Purdue University with a B.A. in Writing and Linguistics.

Writing has been a passion of hers for as long as she has advocated for animals.

She lives in Columbia City, Indiana, with her husband, daughter, and several animal companions.

Tamira Thayne is the author of The Wrath of Dog, The King’s Tether, Foster Doggie Insanity, and Capitol in Chains, and the co-editor of Rescue Smiles and Unchain My Heart.

Tamira pioneered the anti-tethering movement in America, forming and leadingthe nonprofit Dogs Deserve Better for 13 years. During her time on thefront lines of animal activism and rescue she took on plenty of bad guys (often failing miserably); her swan song culminated in the purchase and transformation of Michael Vick’s dogfighting compound to a chained-dogrescue and rehabilitation center.

Tamira’s spent 878 hourschained to a doghouse on behalf of the voiceless in front of statecapitol buildings nationwide, and worked with her daughter to take on aschool system’s cat dissection program, garnering over 100,000signatures against the practice.

In 2016 she founded Who Chains You, publishing books by and for animal activists and rescuers.