REGISTER TO RECEIVE NEWS UPDATES >>
You are at:Home»Pet IQ»Q: Who designed the Cat Writers’ Association MUSE Medallion™?
By Good News For Pets on May 23, 2017 Pet IQ

In November, 1994, the newly formed Cat Writers’ Association, held its first writing contest and the MUSE Medallion™ was born. 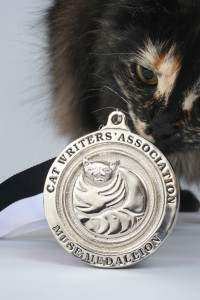 Answer – Founding member, the late Karen Kuykendall, designed the coveted Muse Medallion™. Karen was also the first recipient of a Muse Medallion. The Muse is awarded to the best work of like kind, such as newspaper articles about health and general care, magazine articles about behavior, or newsletter columns. The special awards go to the entry that best covers a specific topic.