REGISTER TO RECEIVE NEWS UPDATES >>
You are at:Home»News»Majority of Pet Owners Located in Latin America, Russia & USA
By Good News For Pets on May 25, 2016 News, News Release, Pet News

Which countries have the biggest percentage of pet owners? Which pets do they have living with them out of cats, dogs, birds, fish or other pets?

(NUREMBERG, Germany, May 24, 2016) – Over half (56 percent) of people internationally have at least one pet living with them, with dogs proving most popular in Latin America, while Russian and French pet owners prefer cats. This is according to an online survey of over 27,000 people across 22 countries, conducted by GfK. 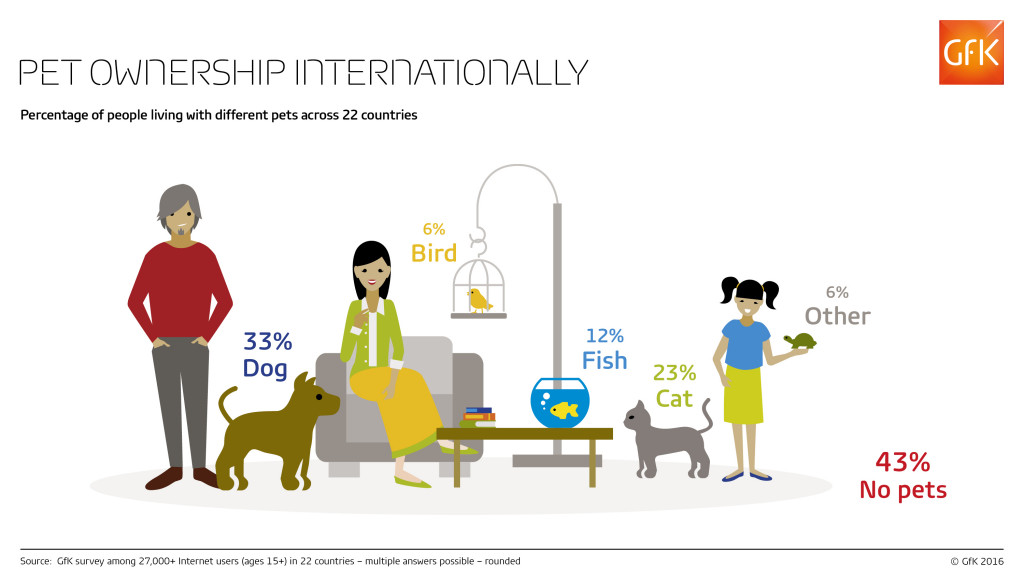 Across all countries surveyed, pet ownership is highest in Latin America, with 80 percent of the online population in both Argentina and Mexico owning a pet, together with three quarters (75 percent) in Brazil. The next biggest pet countries are Russia, where just under three-quarters (73 percent) own a pet, and the USA, standing at 70 percent.

Asian countries appear to have the smallest percentage of their online population who own pets. In South Korea, just 31 percent report having any pet living with them, followed by Hong Kong at 35 percent and Japan at 37 percent.

Pushan Tagore, vice president of pet care research at GfK, comments, “Although the Asian countries come lower in this list, these countries comprise a significant and growing share of the global pet market. This is due to the overall size and growth rate of their human population.

“Looking at data from our full range of pet care research, the key markets to watch over the next 12 months areChina, India and LATAM. In these markets, rising disposable income is moving consumers away from table scraps and home cooked food for dogs and cats and towards prepared pet food. This is being driven by the convenience factor, as well as rising awareness of the need to feed their pets with the appropriate nutrition.” 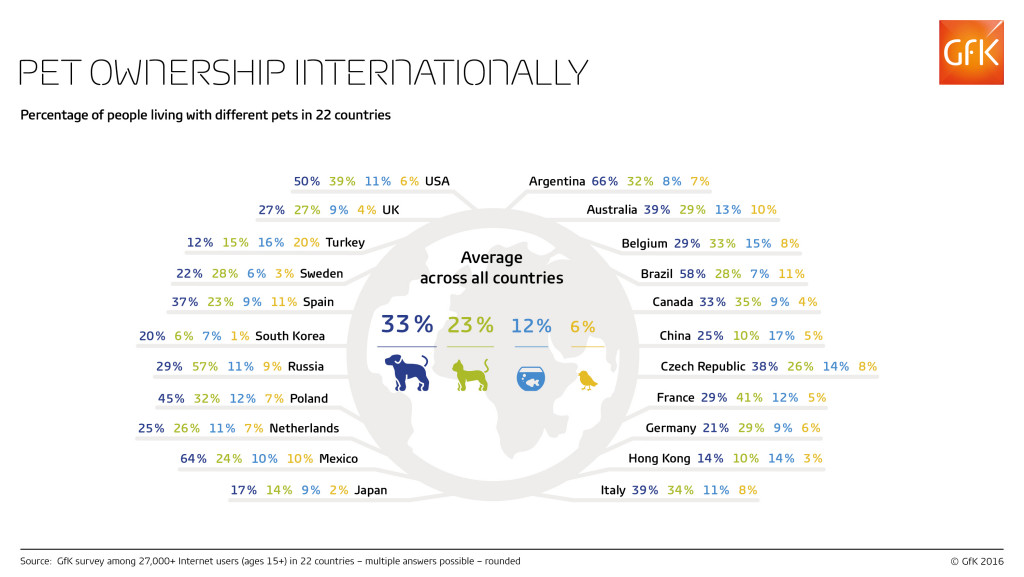 A third of the online population across all 22 countries reports having a dog, compared to just under a quarter (23 percent) who have a cat. Only 12 percent overall keep pet fish and six percent have a pet bird.

Dogs are the most popular pet in Argentina, where two-thirds (66 percent) of the online population are dog-owners, compared to one third (32 percent) who have a cat. Mexico comes next, with just under two-thirds (64 percent) having a dog living with them, and Brazil, where the figure is 58 percent.

Cats, on the other hand, are most popular in Russia. Here, well over half (57 percent) have a cat living with them, compared to less than a third (29 percent) who keep a dog. The next biggest country for cat-owners is France, where four out of ten (41 percent) people keep a cat, followed by the USA, at 39 percent. However, in the USA, dog-owners still outnumber the cat-owners, as half (50 percent) of online Americans have a dog living with them.

Pet fish are most popular in China, pet birds in Turkey

Keeping fish as pets is most popular in China, compared to the other countries surveyed, standing at 17 percent of the online population. This is very closely followed by Turkey (16 percent) and Belgium (15 percent).

Bird-owners, on the other hand, are most prevalent in Turkey, where one in five (20 percent) keep a pet bird. The next closest countries are Spain and Brazil, at 11 percent each – giving Turkey a considerable lead in terms of the number of bird-lovers.

View the full findings for each of the 22 countries at http://www.gfk.com/global-studies/global-study-overview/

Feature photo by Niels Kliim, used under a creative commons license. No changes were made.