REGISTER TO RECEIVE NEWS UPDATES >>
You are at:Home»DWAA»New York and Dogs; the Candy Store for Ideas
By Good News For Pets on February 9, 2016 DWAA, Guest Interview, NYC, NYC Events, Pet News
This Goodnewsforpets interview features another speaker from the February 14, 2016 DWAA Writing Seminar in New York City. Mara Bovsun, an award-winning writer and editor for the American Kennel Club’s publications and websites. She has also served in many other capacities for the organization, not the least of which is being the AKC Beagle Mascot, Bailey, at several events. When she’s not being the dog, she practices and competes in agility, running, and tricks training with two Leonbergers, Emily and Cleah. She also has the great privilege of watching over her 15-year-old yellow Lab, Maggie, the one-time death-row inmate who gave her the wonderful gift of a life with dogs. Goodnewsforpets caught up with her before the seminar; the following is her interview.
How would you say media impacts this industry?
I don’t really think of the relationship between humans and dogs as an industry, although there are big bucks involved with the marketing of all kinds of related items. I think in terms of stories, and with dogs, usually in terms of love stories. All of these new methods are just ways to help get these stories out. Seriously, to me, the internet is just a more effective and quieter method of shouting from the rooftop.
How did owning Megan and then shortly after, Maggie, get you into writing about dogs?

I had never owned a dog before we inherited Megan, my father-in-law’s elderly yellow Lab. Seriously, I did not know how to hold a leash or where to find dog food in the supermarket. By the time Megan died of osteoscarcoma, just a year and a half after she came to live with us, I could not even remember life before I had a dog. I was so crazed with grief that I ran out and did something no one who knows better would do. I grabbed the first dog who looked remotely like Megan. She was a big unruly Lab yellow, as she was labeled in the shelter—and she was scheduled to die the next day. This dog was such a handful that even the shelter workers told me I shouldn’t take her, especially since I was a total novice and didn’t have the skills to turn her around. They said it would be a disaster.

She became Maggie, my Maggie.
Maggie was the most infuriating, unforgettable character I’ve ever known. She gave me a crash course in canine behavior, as well as material for many, many stories, right up to the end. Here was a dog whose bad manners almost cost her her life, but we worked really hard and she earned her CGC, two legs of an RN (her hindquarters gave out before we could get the third), and she became a therapy dog. Writers just naturally tend to put their experiences on paper, so that’s how it started.
When she died in August, at around 16, some of my extremely talented friends painted her portrait or wrote tributes to her. One put a Maggie sketch in the Dog Chapel. I keep thinking that had I not taken the risk, she’d have died in that shelter and would not even be a shadow of a memory. Now artists are immortalizing her. Life is strange. 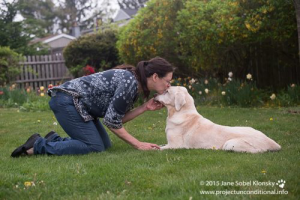 How does living in New York City help gather information about specific topics?
Oh my! I’ll give you one example. When I picked up my Leonberger puppy Emily, my first puppy ever, I asked her breeder for some house-training pointers. She gave me the basic advice you find in most books, “When you see her circling or scratching the floor, pick her up quickly and get her outside.” I reminded her that we live on the 15th story of a high rise. “Oh,” she said, pondering a moment. “Good luck.” We got the job done, but it took some creativity and fast footwork (especially that time some clown hit all the buttons in the elevator for each floor). Recently, I noticed a woman with a pup in my building, and she was at wit’s end about the house training thing. I gave her the Emily Protocol, and the puppy was fine within a month. Another thing: You really do learn a lot about human nature when you are tooling around New York City with Leonberger puppy in a stroller.
Bottom line: New York is a candy store as far as ideas go, and it is also the world’s best puppy socialization laboratory. I’m working on a book based on lessons from all the high-rise hounds I’ve met and loved over the years. And yes, you can happily live in a studio apartment with two Leonbergers, a Labrador Retriever, and a husband.
Being an award winning writer, what are some of your favorite pieces you have written and why?
I love when I hear from people who say that a story I wrote kept them from giving up on a difficult dog. I did a series of articles for one of our websites on dogs who had rough starts in life but, with dedicated owners and intelligent training, went on to achieve CGCs, agility titles, or entered therapy or service work. The best example of this was a story on one of the Vick dogs who became an agility star, and what it took to turn this dog around. I don’t sugar coat it, as many publications do, because you need a lot more than love when dealing with such damaged souls. In the Vick-dog case, the new owner was highly experienced in working with pit bulls and rescues. Still, despite a half century of training know-how, it took her years and huge amount of creativity to work through this dog’s problems. Good-hearted people are often moved to take on a dog with a hard-luck past, but they should know what they are getting into, and how long it might take to see improvement. So the stories I like the best, whether they win awards or not, are the ones that convey those concepts and give people no-nonsense guidance on what to do.
How would you say using meet-ups help promote projects best? What can attendees expect to hear about in your presentation?
In my presentation I’ll discuss how the new media (Facebook, the Meetup site, Twitter, blogs), the old media (newspapers, radio, television), and, yes, real life, intersect. I’ll talk about how you can use all of these tools to find or create (and sell!) stories, and, most importantly, how you can use them to help people and their dogs.
It will be based on the series of Canine Good Citizen Meetups we conducted in early 2015.
What has joining DWAA done for your career?
I can’t count how many friends I’ve made through this organization. At this stage of my life and career, that’s the most important thing, although the nifty medallions are fun, too.
What is it like being an AKC Beagle Mascot?
Well, I’ll let Bailey answer that (and don’t let her get away without telling you why it took her SIX attempts to pass her CGC test!) Bailey, what do you think?
“Woof, rowwrl,woof, gragrourah.”
(I think she says it’s fun, her CGC only took five attempts, and she wants some roast beef.)
How do you come up with your blog ideas? And are they based off of real-life experience with your dogs or dogs you have worked with?
It’s hard to explain. I just feel when something is a story or not. There’s no formula, and sometimes I’m wrong. A lot of them are about Maggie, whether directly or indirectly. To be honest, since she’s been gone, I’ve been having a lot of trouble writing. I suppose this will pass at some point, and my beautiful Leonberger, Cleah, a retired show dog, and her daughter, my “little” Emily are providing me with new, very different kinds of stories. (Like how we were almost done in at a recent rally trial by a little bag of roast beef.)
Is there anything else you would like to add?
I’d just like to thank DWAA for giving me the opportunity to talk about my dogs to a captive audience, and maybe make some new friends.
Share. Twitter Facebook Google+ Pinterest LinkedIn Tumblr Email