Thanksgiving’s all about family gatherings, right? Well, the National Dog Show Presented by Purina Nov. 18-19 in Philadelphia is taking it to heart and serving up plenty of family, too, albeit a bit early.

Nancy Lewine, Jenny Cochran and GoldenSoul Dogs, of Harleysville, Pa., have entered three generations of Golden Retrievers at the benched event, which is virtually on their home turf – 30 minutes – away. 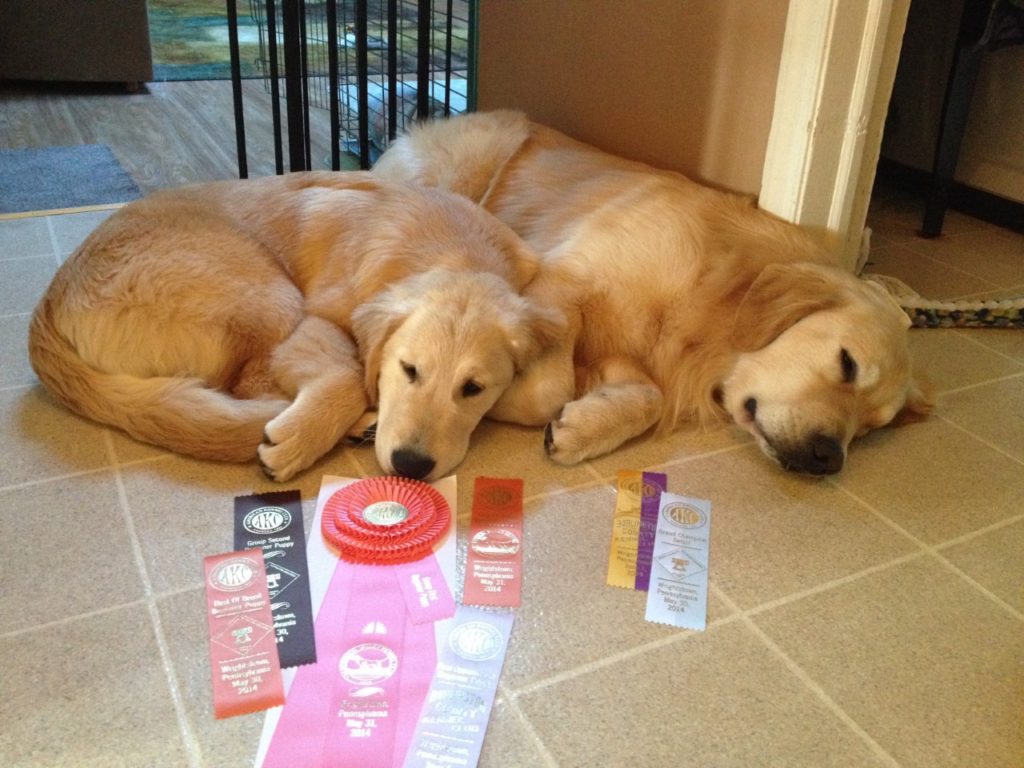 There’s Tracker, 6, his daughter, Sage, 4, and granddaughter, Ariel, 8 months, who will be gaited by Heather and Zack Helmer, of Queenstown, Md., their regular professional handlers.

“It’s unusual to see three generations competing at the same show,” says Lewine, “but I would guess it’s not a first. This is the first time we’ve done this and the window of opportunity is closing, as Tracker is winding down while the other two wind up.”

Lewine became involved with Golden Retrievers in 1979 and bred only two litters over the following two decades. After the passing of two Goldens a week apart in 2011, she and her partner, Cochran, resumed breeding, training and handling and have been deeply involved since.

Cochran previously owned Newfoundlands and attempted to owner-handle them decades ago, ultimately becoming frustrated and decided to set her show dreams aside.

After the deaths of the two Goldens, they found and adopted Tracker and five months later, Skye, which have become their show and foundation dogs. “We knew the pedigrees were a good match from the beginning,” says Lewine, an organizational development consultant who helps small- to mid-size firms grow while mitigating their normal growing pains. Fortunately, this job allows her to work from home. 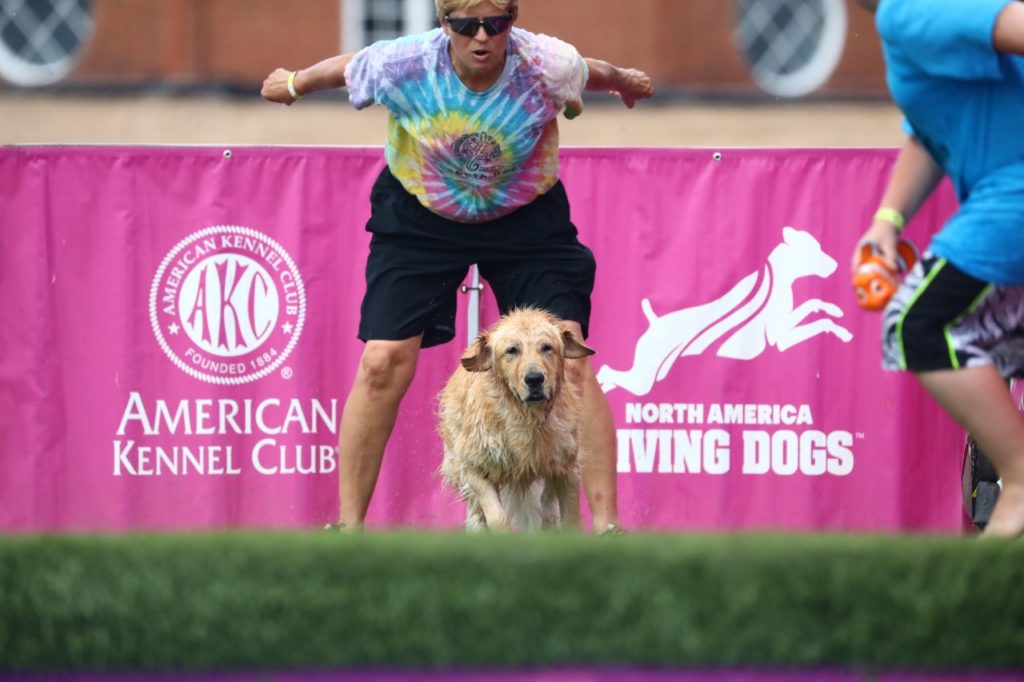 Lewine, who refers to herself as the GoldenSoul “executive producer,” oversees the breeding program, show strategy/schedule/handler relationship, advertising strategy and finances. She also produces the website content, interviews prospective puppy purchasers, grooms the dogs and oversees their medical needs.

Cochran, a teacher, coordinates training and titling of dogs in performance events and only recently started in conformation. She will not, however, replace the Helmers. Cochran creates the structure for raising and maintaining the pack and manages the educational support for puppy families with Google docs online.

“We are a team,” Lewine emphasizes. “So much so that neither of us could do the whole job without the other. We are the package, along with our dogs, of course. We split the duties into our respective areas of expertise and collaborate on the areas in which we overlap.”

“I selected a Golden Retriever when I was in graduate school,” replies Lewine, “after owning a mutt and a couple of other breeds in childhood. I researched breeds that would best match who I am and came up with the Golden. It’s a sporting dog and I was a college basketballer at Penn State and was a multi-national champion in Taekwondo. Goldens are social dogs who like people, are easily trainable and very smart. I also felt that Goldens maintain their aesthetics throughout their lives.” 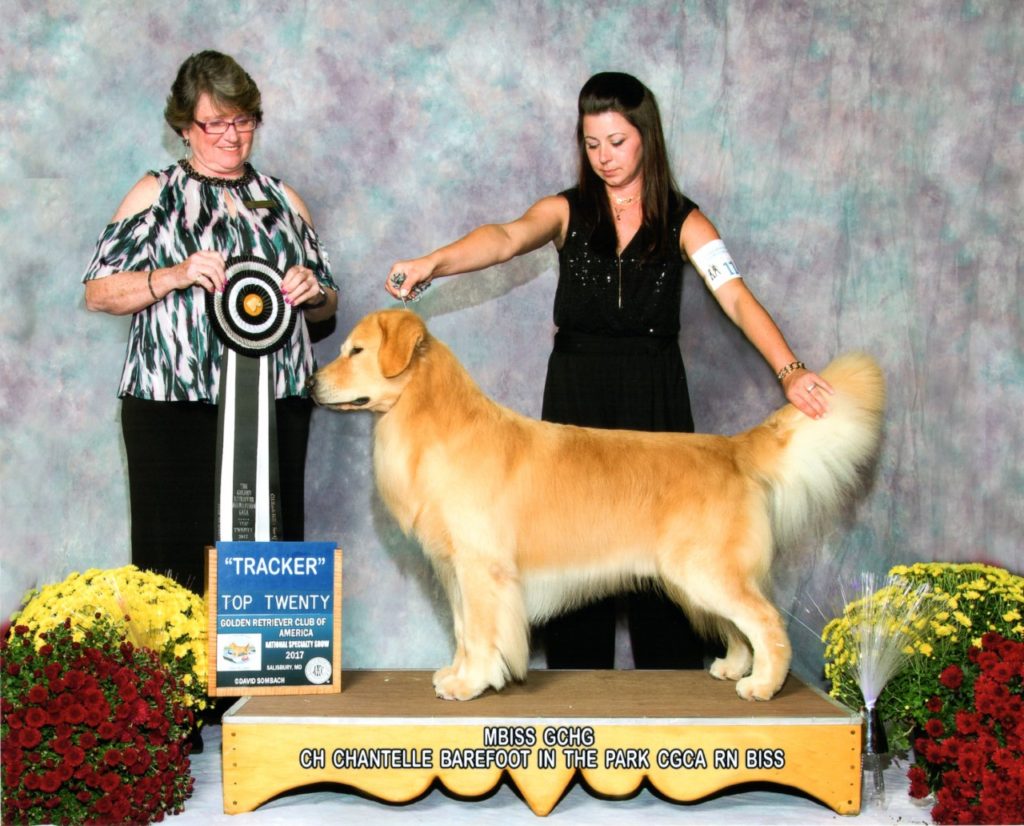 The 6-year-old Tracker is in the Golden Retriever Top 20 this year for the second consecutive year. Photo by David Sombach.

She searched the newspaper in in Madison, N.J., while attending grad school at Fairleigh Dickinson University and found a puppy available. She brought Brandy home on Christmas break, labeled her “my first child” and the rest is history.

Fast forward and today Lewine and Cochran attend dog shows almost every weekend, chiefly traveling regionally. Lewine estimates she has attended about 500 shows since 2011, when the pair started with Tracker. In the process, she has established many relationships and studied the breed intensely as well as the sport of showmanship.

“I quickly figured out how the ‘game’ was played at all levels. The confluence of my background and experience came together quickly for me in the show world. I just ‘got it.’”

Early on, her dream was for Tracker to be a Top 20 dog. Five years later, he was gaiting around the ring in that upper echelon. “It’s been a ton of work and plenty of drama,” she concedes, and Top 20 status in back-to-back years (2016-2017).

Asked from a breeder’s perspective what are the strong conformation show qualities of each, Lewine replies:

Tracker: “He floats around the ring with flawless movement. Structurally, he is well put together with a perfect topline and loads of Golden personality. He has that blocky head that many find appealing. He is Mensa-level smart and loves to show.”

Sage: “Her head is softer, not quite as blocky. She is gorgeous with a good structure, lots of drive and has a playfulness about her. She is showy, and while she looks like a female clone of Tracker she is her own ‘woman.’” 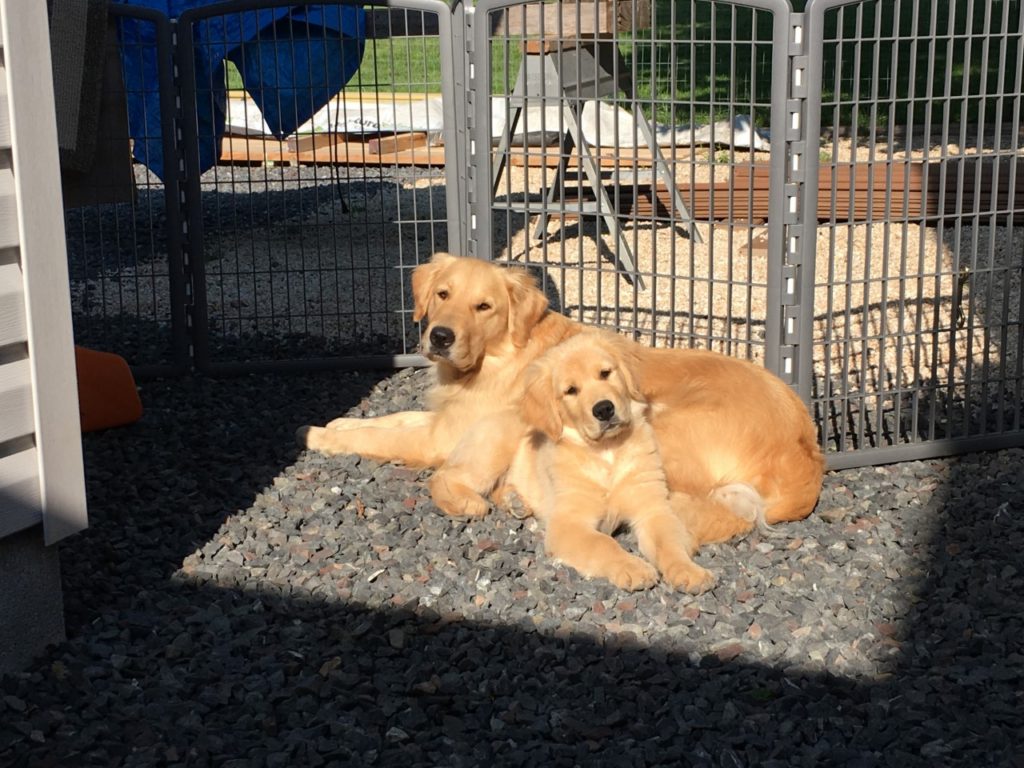 Ariel: “She’s our little rock star! She has grandpop Tracker’s superior movement and carriage with a bit more stop and bend of stifle. She’s already challenging Tracker’s record at our National.”

The Helmers, noted for their prowess with hounds in the ring, have shown GoldenSoul dogs for a year. “We have a great working relationship with them,” enthuses Lewine. “I gambled that they could take their expertise and bring it into Goldens – and they have. Heather concedes that she’s now a ‘Golden Girl!’ Of course, Bloodhounds are her first breed and we respect that.”

She took Best in Show at The National Dog Show in 2014 with Nathan, a 4-year-old Bloodhound and a huge crowd favorite.

Helmer discussed the challenges and virtues of showcasing Tracker and Ariel for judges:

“Tracker’s showmanship and fun games he likes to play in the ring keep him in the eyes of the judge. The breed is supposed to be happy, but the challenge for the handler is that there are so many types of Goldens, and if a judge doesn’t like his type, we must show off a strong point that the judge that day might like.

“He seldom has a bad day. When the camera or spotlight isn’t on him, playing with him keeps him happy and on his toes. He relishes the one-on-one attention.”

“Ariel is the epitome of the Golden Retriever, a happy young girl who does it all herself.”

Depending on their number of entries per show, sometimes the husband/wife team are uncertain who will be showing which dog in the breed and/or group rings. 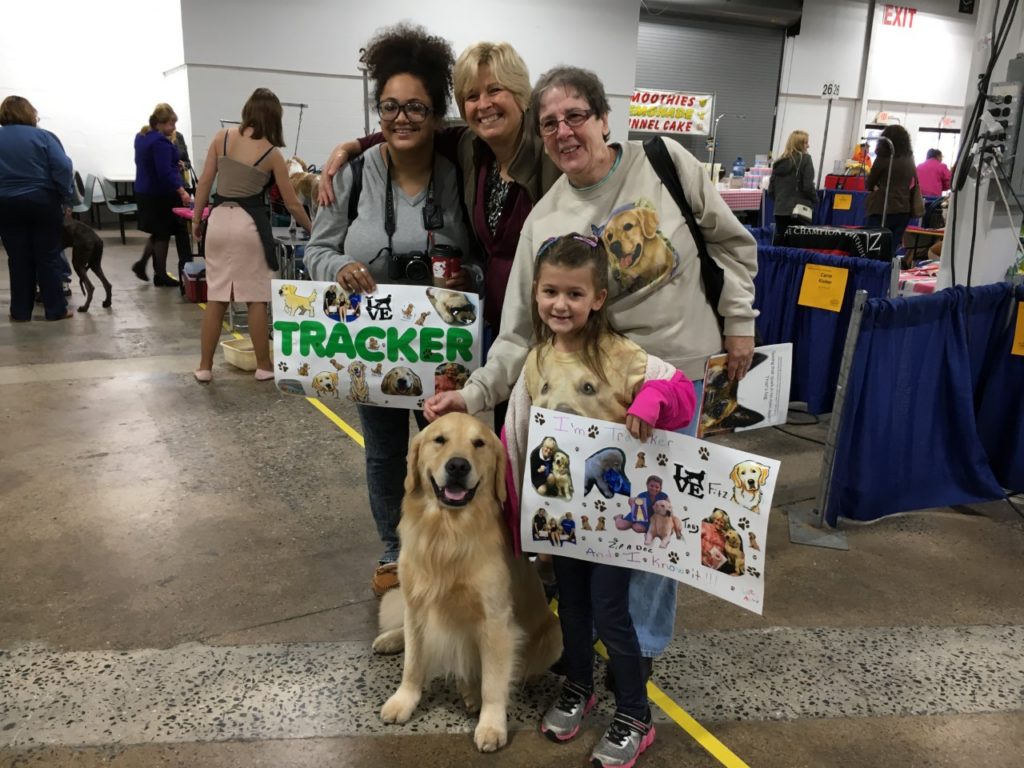 Tracker hangs out with his SuperFans at the 2016 National Dog Show in Philadelphia. Standing, from left to right, are Nyah King, Cochran and Phyllis Miles King. In front are Tracker and Abby King. Photo courtesy Nancy Lewine.

Which begs the question: Does Tracker and Ariel bond or perform better for one than the other?

“Tracker is neutral to both,” answers Helmer. “Zack and I handle differently to some degree. Not every dog will work as perfectly for both of us, but some do. But we work as a team. Thus far, I am the only one who has worked with Ariel.”

Developing a bond is critical, she notes. “Sage is a newcomer living with us. She’s learning about us and us with her as a team. A new dog suddenly is asked to depend on us for everything vs. its parents. There can be a difference in a dog’s behavior when the parents are at the show and when they’re not. Once the dog bonds strongly with us the goal is that the owners can eventually come to the show, sit and watch and the dog will focus on the handler.”

With swagger and verve, all three compete outside the conformation right, too. Tracker has done rally, obedience, tracking, trick and lure coursing; Sage has performed in  four of those sports, plus dock diving; Ariel just became old enough to earn her dock diving title and will pursue lure coursing when she’s a year old.

Now, just in case you’re wondering: A Golden Retriever has never won The National Dog Show, which dates back to 1879 and has been held continuously in Philadelphia since 1933. But there’s always hope. Remember, the Chicago Cubs won the 2016 World Series, their first since 1908.