For the first time in 99 years, a total solar eclipse will occur across the entire continental United States, and NASA is preparing to share this experience of a lifetime on Aug. 21.

Viewers around the world will be provided a wealth of images captured before, during, and after the eclipse by 11 spacecraft, at least three NASA aircraft, more than 50 high-altitude balloons, and the astronauts aboard the International Space Station – each offering a unique vantage point for the celestial event. 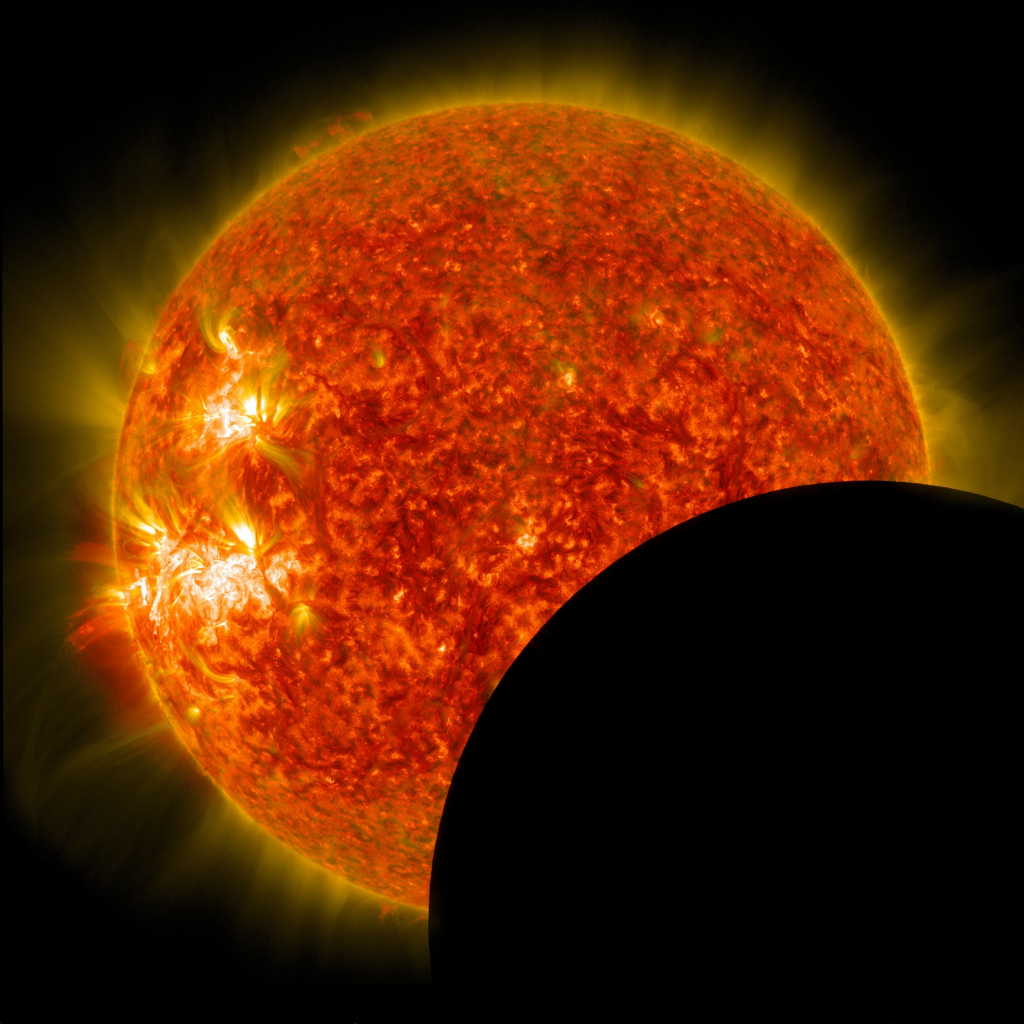 This image of the moon crossing in front of the sun was captured on Jan. 30, 2014, by NASA’s Solar Dynamics Observatory observing an eclipse from its vantage point in space. Credits: NASA

NASA Television will air a multi-hour show, Eclipse Across America: Through the Eyes of NASA, with unprecedented live video of the celestial event, along with coverage of activities in parks, libraries, stadiums, festivals and museums across the nation, and on social media.

Coast to coast, from Oregon to South Carolina, 14 states will – over a span of almost two hours – experience more than two minutes of darkness in the middle of the day. When the moon completely blocks the sun, day will turn into night and make visible the otherwise hidden solar corona, the sun’s atmosphere. Bright stars and planets also will become visible. Using specialized solar viewing glasses or other equipment, all of North America will be able to view at least a partial eclipse lasting two to four hours.

“Never before will a celestial event be viewed by so many and explored from so many vantage points – from space, from the air, and from the ground,” said Thomas Zurbuchen, associate administrator of NASA’s Science Mission Directorate in Washington. “With our fellow agencies and a host of scientific organizations, NASA will continue to amplify one key message: Take time to experience the Aug. 21 eclipse, but experience it safely.”

The only safe way to look directly at the uneclipsed or partially eclipsed sun is through special-purpose solar filters, such as eclipse glasses or handheld solar viewers. Homemade filters or ordinary sunglasses, even very dark ones, are not safe for looking at the sun. In the 70-mile-wide swath of the country that will experience a total eclipse, it’s safe to look at the total eclipse with your naked eyes only during the brief period of totality, which will last about two minutes, depending on your location.

An alternative method for safe viewing of the partially-eclipsed sun is with a pinhole projector. With this method, sunlight streams through a small hole – such as a pencil hole in a piece of paper, or even the space between your fingers – onto a makeshift screen, such as a piece of paper or the ground. It’s important to watch the screen, not the sun.

NASA and other agencies will provide vital information and updates on their respective websites that include viewing safety, activities across the country including at national parks, in addition to transportation preparations.

Many researchers and citizen scientists will take advantage of this unique opportunity to study our sun, solar system, and Earth under rare circumstances. The sudden blocking of the sun during an eclipse reduces the light and changes the temperature on the ground, creating conditions that can affect local weather and animal behavior.

Understanding the sun has always been a top priority for space scientists. These scientists study how the sun affects space and the space environment of planets – a field known as heliophysics. As a source of light and heat for life on Earth, scientists want to understand how our sun works, why it changes, and how these changes influence life on Earth. The sun’s constant stream of solar material and radiation can impact spacecraft, communications systems, and orbiting astronauts.

“Eclipse 2017 provides an incredible opportunity to engage the entire nation and the world, inspiring learners of all ages who have looked to the sky with curiosity and wonder,” said Steven Clarke, director of NASA’s Heliophysics Division in Washington.

NASA spacecraft capturing the event include: NASA’s Lunar Reconnaissance Orbiter, which will turn toward Earth to track the shadow of the moon on our planet; a host of Earth-observing spacecraft, which can both observe the shadow of the moon and measure how it affects Earth’s weather; and a fleet of solar observing spacecraft. NASA images and data of the eclipse will complement that collected by other scientific organizations.

To watch the Aug. 21 NASA TV eclipse broadcast online and access interactive web content and views of the eclipse from more than 60 telescopes, aircraft and balloons, visit: