REGISTER TO RECEIVE NEWS UPDATES >>
You are at:Home»Media»Books»The Mountaintop School for Dogs And Other Second Chances
By Ranny Green on October 1, 2014 Books, Media

The second-chance characters here are both two- and four-legged and as often happens with the human-animal bond they are saviors for each other.

Like Evie, 24, the dogs, which she eventually trains, are throwaways and products of disturbed pasts, with each requiring a different rehabilitation means of getting ready for hopefully a future adoption.

A recovering drug addict, Evie has no clue what she wants to do with her life. When she applies for a training position at Mountaintop her answers aren’t exactly truthful. For instance, she says yes to previously having worked with dogs. Not true! 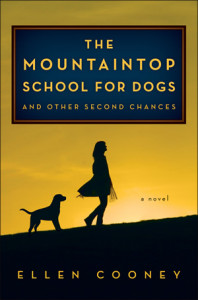 “The Mountain Top School for Dogs And Other Second Chances,” by Ellen Cooney. Houghton Mifflin Harcourt. $24.

Nor does she enter a single detail in the application-form section for her bio but the capper is her answer to the final question: “What would you choose for a career if you lived in a world that had no animals?”

Her reply: “If the world had no animals and I couldn’t be a dog trainer, I’d become someone who talks to aliens professionally.” Huh?

Upon being accepted into the program, she is overseen by the self-appointed “warden,” Mrs. Auberchon, and interacts with another young trainee, Giant George, 15, in the inn at the base of the mountain.

Concerned that her lies and unfamiliarity with dogs is quickly going to catch up with her, Evie spends countless hours on the computer learning all she can about the dogs and the breeds she will eventually be training. Her biggest wake-up call quickly becomes that one training approach won’t work for all of these troubled castoffs.

Patience, self-confidence and compassion are her biggest needs as others offer very little assistance in this remote teaching site where the emphasis is positive reinforcement.

Every staffer from the older instructors (former nuns) to Mrs. Auberchon come with plenty of emotional baggage, to which Evie can certainly relate.

The one shortcoming in this novel – and it’s just a quibble – the author doesn’t present sufficient background on Evie. Yes, she seems to have something to hide; yes, she comes from a troubled background. But I desperately want to know more.

Conversely, her four-legged trainees – Tasha, Shadow, Josie, Dora and Alfie – are introduced nicely with italic vignettes detailing their past, adoption history and their issues.

While the “broken” dogs and Evie’s backgrounds lay the groundwork for a tumultuous psychological landscape, it never surfaces. Ironically, it’s a soothing read despite the stiff-arm nature of all characters who prefer to keep Evie at a distance for a while.

Upon arriving at the school, Evie spends her first few weeks at an inn at the base of the mountain dealing with the icy Mrs. Auberchon and meeting dogs who she’ll be interacting with at the top of the hill – eventually.

After getting the call to come up to the Sanctuary, Evie becomes deeply bonded with each of her dogs and emotionally invested in the Sanctuary, taking her into challenging rescue scenarios and criminal implications away from the mountain.

Cooney paints a rich and intimate portrait of open-ended second chances, deftly balancing frustration and fascination along the challenging pathway with vigor and sensitivity.

This review was originally published on Seattle Kennel Club September 1, 2014.