REGISTER TO RECEIVE NEWS UPDATES >>
You are at:Home»Media»Books»Land of the Free by Donna Ball
By Good News For Pets on March 2, 2018 Books, Media

Land of the Free by Donna Ball was a Dog Writers Association of America (DWAA) 2017 writing competition winner, receiving the coveted Maxwell Medallion in the fiction book category. 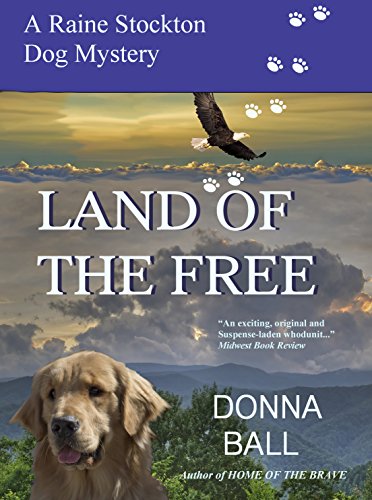 No one knows the mountains of North Carolina like Raine Stockton and her search and rescue dog, Cisco. When they are called in to search for an elderly man who has wandered away from home it seems like a routine mission, until Raine looks through her binoculars and sees something she wasn’t supposed to see. A dead man is very much alive, a felon is walking around free, and Raine is the only person who can testify to the fact. The problem is that no one takes her claims seriously…except the person who wants her dead.

Unwillingly thrust into the midst of an unpleasant child custody battle and a hotly contested political race, Raine finds herself questioning her own judgment and uncertain who to trust. Is she suffering from PTSD, or has a nightmare from her past materialized to haunt her? The police tell her one thing, her common sense tells her another. But when murder strikes too close to home, the hypothetical question becomes all too real, and no one is above suspicion: not the man Raine loves, not the man she once married, not even Raine herself. And they all must choose how far they’re willing to go to protect the ones they love.

In this thrilling conclusion to the trilogy that includes HOME OF THE BRAVE, DOG DAYS and LAND OF THE FREE, Raine and Cisco face their biggest challenge yet, and when it is over nothing will ever be the same.

Donna Ball published her first book in 1982. Since that time she has written over eighty works of commercial fiction under pseudonyms that include Rebecca Flanders, Donna Carlisle, Leigh Bristol, Taylor Brady, and Donna Boyd. She is known for her work in women’s fiction and suspense, as well as supernatural fantasy and adventure. Her novels have been translated into well over a dozen languages and have been published in virtually every country in the world. She has appeared on Entertainment Tonight and Lifestyles of the Rich and Famous, and has been featured in such publications as the Detroit Free Press, the Atlanta Journal Constitution, Ladies Home Journal, Good Housekeeping, and even T.V. Guide. She is the holder of the Storytelling World award, 2001, the Georgia Author of the Year Award, 2000, Romantic Times Reviewer’s Choice Awards for consecutive years 1991-1996, the Georgia Romance Writer’s Maggie Award, and the Lifetime Achievement Award from Romantic Times, among others.

Donna lives in the Northeast Georgia Mountains in a restored Victorian barn which was the inspiration for A YEAR ON LADYBUG FARM and AT HOME ON LADYBUG FARM. She spends her spare time hiking, painting, and enjoying canine sports with her four dogs– two golden retrievers, a rough collie, and a border collie.