There’s little wonder why Kansas City, Mo., and the surrounding area is recognized as the heart and soul of North America’s animal-health industry. Just look at what has happened there this week. 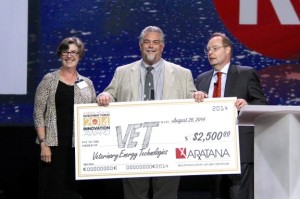 One of the presenters, Veterinary Energy Technologies, of Apopka, Fla., made quite an impression with the panel of industry leaders, winning the coveted Innovation Award, for the strongest presenter of the day. The award included a $2,500 check from Aratana Therapeutics.

The company plans to bring a proprietary cold plasma energy technology to treat wounds and infections. The company’s platform promises to reduce bacteria, fungi, and viruses in wounds as well as enhance the wound-healing cascade. As such, the company will provide a tool to address the consequences of chronic infections and wound healing. The company has produced a prototype device which is ready to begin tests on various animal species and conditions.

Prior to the forum, the Kansas City Health Corridor reported that 56 percent of total worldwide animal health, diagnostics and pet-food sales companies are located within that corridor.

“This latest survey is a powerful endorsement of nearly a decade of cooperation, teamwork and strategic focus that has driven the activities of the KC Animal Health Corridor effort since 2006,” said Scott Bormann, corridor advisory board chair and vice president of U.S. operations for Merck Animal Health.

“We are proud of the regional partnership that exists among the economic development, civic, corporate, academic and governmental leadership in the KC Animal Health Corridor,” said Kimberly Young, vice president of bioscience development at the Kansas City Area Development Council. “We are widely recognized as the strongest and most admired team in the global animal-health industry.” 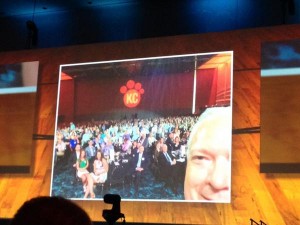 Since the KC Animal Health Corridor launched in 2006, 31 animal-health companies have located in the corridor, anchored in Manhattan, Kan., and Columbia, Mo. These firms have pledged to create 1,368 new jobs resulting in $78.6 million in new payroll. They have made an $872.5 million capital investment, occupying more than 1 million square feet of new space.

The corridor is home to more than 300 animal-health companies, representing the largest concentration in the world.

According to a 2014 KC Animal Health Corridor Asset Survey, companies within the geographical passageway represent 29 per cent of the worldwide sales of animal-health products and diagnostics, which adds up to slightly more than $7.1 billion.

The survey further revealed that companies within the corridor represent 67 per cent of the total animal health, diagnostics and pet food sold in the U.S., which totals $21.5 billion.

The corridor’s status was enhanced even more this week with the announcement that global animal-health company Simcro will locate its North American headquarters in Lawrence, Kan. Based in New Zealand, Simcro develops pharmaceutical delivery systems for production and companion animals.

“Kansas City is the Animal Health Corridor. It has everything we need to be successful in this market, including the concentration of talent and customer base.” said Andrew Shepherd, president at Simcro North America. “Making the move on our own would have been a monumental undertaking, but Kim Young and the Kansas City Area Development Council team were there to assist us every step of the way.”