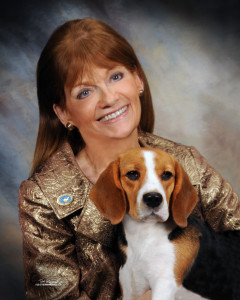 Julie Lux breeds Beagles under the Deluxe kennel name. She is an American Kennel Club licensed judge of Beagles, American foxhounds, Dalmatians and Junior Showmanship. Julie handled her Beagle, GCH Vinla’s L.A. Ink, to #1 owner-handled 13” in the U.S. in 2014. She is vice president of the Leavenworth Kennel Club and show chair of the Heart of America Kennel Club, secretary/treasurer of the American Foxhound Club and a member of the National Beagle Club. This year’s Westminster Kennel Club show was the first Julie has missed since 2002 and only the second WKC show she’s missed since 1993.