This November, for the first time ever, Guy, the Beagle reveals how he went from pawper to proper in, HIS ROYAL DOGNESS, GUY THE BEAGLE: The Rebarkable True Story of Meghan Markle’s Rescue Dog , a gorgeously illustrated, heartfelt, and very funny story of a shelter dog who became a royal dog.

Many may remember Guy as the real star of Prince Harry and Meghan Markel’s royal wedding earlier this year who famously rode to the wedding alongside Queen Elizabeth.

Beautifully illustrated by the same artist of bestseller A Day in the Life of Marlon Bundo, this book will have readers of all ages barking with joy, with its laugh-out-loud humor and moral imperatives about the unconditional love of family, embracing our differences, and celebrating what makes each of us special.

Like many good stories, Guy’s begins in the backwoods of Kentucky. He was lost and living alone until he met his forever owner at an adoption event; her name was Meghan Markle. They did everything together: went on walks, played fetch, and binge-watched Suits. Guy absolutely adored her, but he wasn’t the only one. A human loved Meghan, too; his name was Harry. Tall and debonair, Harry was also a prince!

Guy soon finds himself in London, ecstatic about this new adventure. He works hard to fit in to the royal dog way of life, 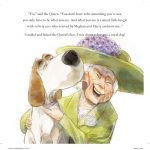 but he struggles. He has no fancy papers, no high-class education, and no command of the British puparazzi. As the wedding day approaches, Guy feels as alone as he did back in Kentucky. But when the Queen gets into a bind when a royal tradition is nearly forgotten, Guy’s Kentucky skills might be able to save the day. With the Queen’s encouragement, Guy learns the true meaning of family—even if it’s a royal one.

Co-Authored by Camille March, a former publishing professional and current Anglophile. She lives in New York City with her husband, two children, and too many animals for an apartment. Her first dog was a beagle named Ralph.

Co-Authored by Michael Brumm, an Emmy-winning writer/producer for The Late Show with Stephen Colbert. His first dog was a poodle named Spencer.

Illustrated by Gerald Kelley, who received his BFA in studio drawing and worked as an editorial illustrator before focusing solely on children’s publishing. Under the pen name, EG Keller, Gerald illustrated the New York Times#1 bestseller, A Day in the Life of Marlon Bundo, and His Royal Dogness, Guy the Beagle. He illustrated documentarian Ken Burns’s New York Times bestselling children’s book, Grover Cleveland, Again! and The Legend of the Jersey Devil, My Name Is Bob, and M Is for Monster: A Fantastic Creatures Alphabet. Gerald lives in Colorado with his husband.