REGISTER TO RECEIVE NEWS UPDATES >>
You are at:Home»Media»Books»The Great Catsby
By Good News For Pets on December 29, 2014 Books, Media

The latest in the Sam the Cat mystery series, by Linda Stewart, The Great Catsby is the fourth in the series and more recently a Cat Writers Association 2014 nominee for Books: Fiction.

Linda Stewart, who’s been nominated for Edgar and Agatha and CWA awards, has written “something of everything”, with 17 published novels and novelizations, television dramas and documentaries, magazine journalism, newspaper book reviews, advertising copy, and lyrics, sketches and special material for nightclubs and Off-Broadway. She has also taught writing and literature courses at The School of Visual Arts in New York City. 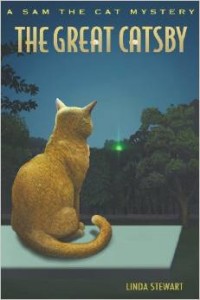 Sam, the hero, is a cat detective who catches human crooks, usually for the fee of half-a-pound of lox, and he’s again in top form in his latest adventure — weeding out suspects, ferreting out motives, cracking a code and, as always, cracking wise. Along the way, he meets interesting characters, human as well as feline, and observes the romance between his country cousin Pansy and his neighbor Catsby. In the fourth installment of the Edgar and Agatha Award-nominated series, Sam (the cat detective) spends Memorial Day weekend in the village of East Ham where he finds himself paw deep in mystery and adventure. Any resemblance to “The Great Gatsby” is purely intentional. For ages 9 to adult.