New York – June 30, 2020 — The Big Apple poster created by Ogilvy & Mather in 1976 and signed by Robert Redford says it all, “You’d have to be a little crazy to live in New York, but nuts to live anywhere else.” The iconic framed poster has followed Germinder + Associates founder and president Lea-Ann Germinder, APR, Fellow, PRSA everywhere she’s lived and every office she’s opened since 1976.

On July 1st, as Germinder + Associates celebrates the 20th anniversary of the first opening of its New York City office, the poster special meaning. The poster was created in 1976 at a time New York City was going broke. Now, New York is in the midst of a pandemic and the poster is on display for all the Zoom calls as a good luck charm. New York will be back, and in the meantime, the company is marking its 20th anniversary with an affirmation of its commitment to New York City, mentoring and increasing diversity in the public relations profession. 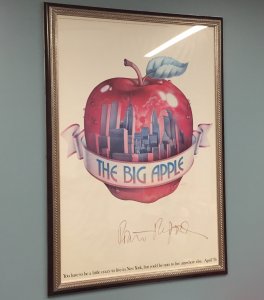 The company formally opened its first New York City office in the Hudson Square area of Greenwich Village. It had launched Goodnewsforpets.com earlier in the year. The company has also had offices in the famous Meat Market district, Park Avenue and now is currently located in Midtown at 747 Third Avenue.

“There isn’t any area of New York City we don’t love and we look forward to when we can fully operate back in New York full-time. We were thrilled to open our doors in Kansas City in 1998, but to open the office in New York City in 2000 was a dream come true. While I grew up on Long Island, I came to the city every chance I had, and to me, even as we still battle the pandemic, the Big Apple is still the greatest city in the world,” said Germinder.