The saying ‘every dog has his day’ is particularly true about 9-year-old Great Pyrenees, Duke, who was recently elected to a third term as mayor of a small Minnesota village. 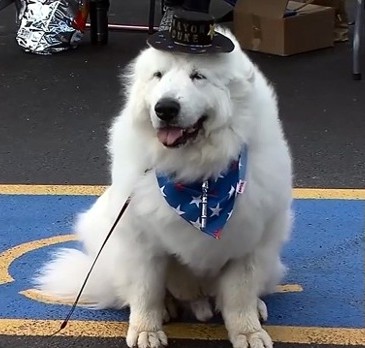 Duke the Great Pyrenees proudly serves a community of 1,039 residents living in the village of Cormorant, Minnesota. At the recent 6th Annual Cormorant Daze festival he celebrated his re-election for a third year-long term.

Duke won in a landslide this year. “Everybody voted for Duke, except for one vote for his girlfriend, Lassie,” Rick told WDAY. According to Duke’s owner David Rick, the pup was originally elected by via write-in votes in 2014. Duke defeated the other 2014 candidate Richard Sherbrook, the owner of a local store, ABC News reported in 2014. However, Sherbrook had no hard feelings and even admitted voting for Duke.

Duke won by landslide, making it pretty amazing on how popular he is with his citizens. “I don’t know who would run against him, because he’s done such great things for the community,” said local resident Karen Nelson told WDAY.

Goodnewsforpets wishes Mayor Duke all the best in his third term!