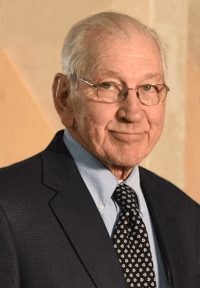 The AVMA Award is given annually to a distinguished member of the association who has contributed to the advancement of veterinary medicine in its organizational aspects.

After receiving his DVM from Auburn University in 1955, Vaughan served as a professor of large animal surgery and medicine at Auburn from 1955 to 1970. He continued his dedication to veterinary education at Cornell University from 1970 to 1974, serving as a professor of surgery and hospital director. In 1974, he returned to Auburn as a professor and head of the department of large animal surgery and medicine until 1977, when he was selected dean of the Auburn College of Veterinary Medicine. He served as dean until 1995, and has remained active in the veterinary community since becoming dean emeritus.

“Dr. Vaughan engages every sector of the college—faculty, staff, students, clients, clerical staff, technicians and custodians—with the same level of concern and respect,” said Dr. Calvin M. Johnson, Dean of the Auburn College of Veterinary Medicine. “His reputation as a practical scholar, clinical specialist and public ambassador is recognized throughout the profession. He is my deeply valued and trusted mentor. He is a large stone in the foundation of today’s veterinary profession.”

Vaughan has been active in organized veterinary medicine throughout his career. He has been a member of the AVMA and Alabama VMA since 1955 and the American College of Veterinary Surgeons (ACVS) since 1968. In 1961 he joined the American Association of Equine Practitioners (AAEP) and served as their president in 1981. He was a member of the Association of American Veterinary Medical Colleges (AAVMC) from 1977 to 1995, and was the chairman of the Council of Deans in 1984. Immediately after retiring from Auburn University, Vaughan served three successive four-year terms on the AVMA Professional Liability Insurance Trust (PLIT) Board, and was elected to serve as its chairman in 2001.

Throughout his career, Vaughan has been deservedly recognized by the profession with many awards and honors. He received the AVMA President’s Award in 1996 for his contributions to the improvement of animal heath through his leadership in veterinary medical education. In 2007, Vaughan received the Auburn Alumni Association Lifetime Achievement Award.

In the years since, Vaughn has also been honored by the AAVMC Special Recognition Award and Lecture in 2008 and the AAEP Distinguished Educator Award in 2010. Perhaps the most notable tribute to Vaughan’s accomplishments is the dedication of the John Thomas Vaughan Large Animal Teaching Hospital at Auburn University, named in 2003 by university officials in honor of Vaughan’s major contributions to veterinary medicine and education in Alabama and throughout the nation.

Vaughan has co-authored two textbooks and written 22 book chapters, numerous journal articles and quarterly columns in the Auburn Veterinarian. He has delivered invited lectures or served as a veterinary consultant in 36 states and four foreign countries.

During AVMA’s Annual Convention in Boston, July 10-14, the AVMA honors some of the nation’s top veterinarians, individuals and organizations during several events and ceremonies. Each recipient has worked tirelessly to improve the lives of both animals and people across the country and around the globe. These recipients represent the very best in all areas of veterinary medicine, from education and public service to research and private practice.

The AVMA, founded in 1863, is one of the oldest and largest veterinary medical organizations in the world, with more than 86,500 member veterinarians worldwide engaged in a wide variety of professional activities and dedicated to the art and science of veterinary medicine.
Share. Twitter Facebook Google+ Pinterest LinkedIn Tumblr Email