The Dog Writers Association of America (DWAA) will induct award-winning author, philanthropist and dog show host David Frei into its Hall of Fame on February 10, 2018. Frei will give an acceptance speech at the DWAA Awards Banquet, held at the Hotel New Yorker in Manhattan.

Other speakers include Dr. Marty Becker, a.k.a. “America’s Veterinarian,” and Laura Coffey, bestselling author of My Old Dog: Rescued Pets with Remarkable Second Acts. Award winners will accept their Maxwell Medallions and a total of $14,000 in prize money.

Tickets to the DWAA awards banquet are available online at DogWriters.org/event.

“I am truly humbled by this honor given to me by my peers and colleagues and friends,” Frei said. “To be a part of this collection of great and talented people who are already inductees is truly special. I know that I share with them the great fortune of having wonderful dogs making my life better every single day. I thank the Dog Writers Association of America for including me.”

Being inducted into the DWAA Hall of Fame is the latest of Frei’s many career accomplishments. New York Magazine once called David Frei “probably the most famous human in the world of canines.”

As the co-host of NBC’s National Dog Show Presented by Purina since its inception in 2002, David is seen every Thanksgiving Day by the largest TV audience for any dog show – more than 25 million viewers in 2017. It is the same role that he perfected in 27 years as the longtime (1990-2016) co-host of USA Network’s Westminster Kennel Club Dog Show. He has now added to his duties with NBC/USA as co-host of the Beverly Hills Dog Show, which debuted on Easter in 2017.

Being America’s “dog guy” has brought him many appearances on network television, including “Today,” “NBC Nightly News,” “Good Morning America,” “Fox & Friends,” “The View”, Martha Stewart,” and more. The dogs have taken him to the White House for a visit with the President, for a ride on a float in the Macy’s Thanksgiving Day Parade, to ring the opening bell at the New York Stock Exchange, to throw out the first pitch at two Major League Baseball games, to a role on HBO’s “Sex And The City” and even to an appearance as a pastry judge on the Food Network’s “Best In Show” competition. 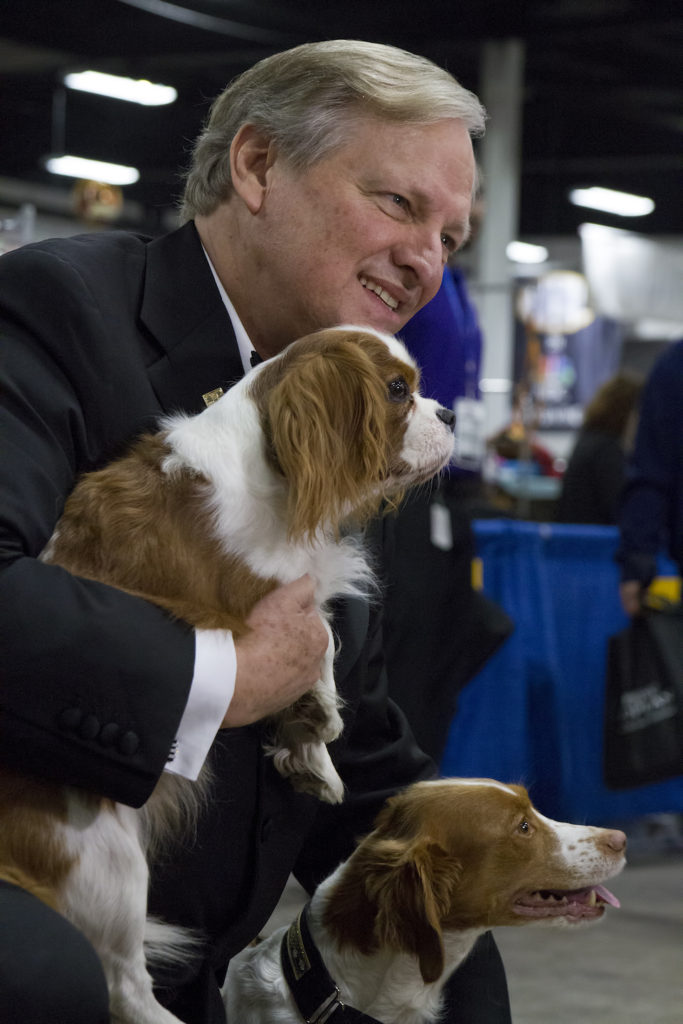 A breeder-owner-handler and judge in the world of purebred dogs for more than 40 years, he has enjoyed much competitive success with his Afghan Hounds, Brittanys and Cavalier King Charles Spaniel. His dog, Ch. Stormhill’s Who’s Zoomin’ Who, was the top Afghan Hound in the country in 1989 and retired as the top-winning female in the history of the breed. As a judge, he has officiated at shows in the U.S., Canada, Australia, Denmark and China.

But David’s true passion comes from the work that his dogs have been doing as therapy dogs at places such as the Ronald McDonald House and Memorial Sloan Kettering Cancer Center in New York (where his Brittanys, Teigh and Belle, were the first therapy dogs ever allowed into these facilities), and at New York’s VA Medical Center. After Teigh and Belle passed, David’s Cavalier, Angel, and his Brittany, Grace, took over for them at many New York facilities.

While at Westminster, he created a charitable activity, Angel On A Leash, to support a therapy dog program at New York-Presbyterian Morgan Stanley Children’s Hospital. Angel On A Leash later became an independent charity with him as founder and president, creating and advocating for therapy dog programs many places, expanding nationwide and receiving many honors for its wonderful accomplishments.

David’s second book, Angel On A Leash (named after the charity), is his view of his world of therapy dogs and his life in dogs, and was the 2012 winner of a Dog Writers Association of America’s Maxwell Award as best depiction of the human-animal bond. David was also the co-author, with Mike Lingenfelter, of The Angel By My Side in 2002. Also a DWAA Maxwell winner, it tells the story of Dakota, Mike’s heroic Golden Retriever service dog. David’s third book, about his years at Westminster, is underway.

He also served as director of communications for Westminster from 2003 to 2015, during which time he was recognized with awards from the DWAA (its AKC Distinguished Service Award), the World Dog Press Association, the Association of Purebred Dog Writers (the Stonehenge Award), and Purina (Better with Pets Award).

Petside.com named him as the Pet Person of the Year in 2011, and in 2015, Dog Fancy magazine, in its final issue, included him in a retrospective, “45 People Who Changed the Dog World.”

He has been honored for his work with Angel On A Leash by the American Cavalier King Charles Spaniel Club, the ASPCA, the Pet Philanthropy Circle and a number of other organizations. He is a past board member for Take The Lead and Morris Animal Foundation, and a past member of the St. Jude Children’s Hospital Sports Council. He has also been recognized for his volunteer efforts with Transfiguration Church and School in New York’s Chinatown for many years.

A native of Eugene, Oregon, David lived in Seattle for 20 years where he owned two popular sports bar restaurants and his own PR agency. He then moved to New York City in 2002, working full-time for the Westminster Kennel Club before moving to Cannon Beach, Oregon, in 2016, and now works as a consultant for NBC Sports. Previously, he held public relations positions with the Denver Broncos, San Francisco 49ers and ABC-TV Sports in New York.

“David Frei is such an inspiration to the dog-writing community,” said Jen Reeder, DWAA’s president. “He is beloved not just by writers, but by dog lovers across the country and world. We’re thrilled to recognize him with our organization’s highest honor, which he so richly deserves.”