The Cat Writers’ Association (CWA) have announced two debut panels at the upcoming BlogPaws Conference in Nashville on May 28-30, 2015.

Publish Or Perish? This publishing panel features pet book authors and publishers Amy Shojai of CWA; Pam Johnson-Bennett, a best selling cat behaviorist and author; Lisa Erspamer, a best selling publisher of cat and dog books; and Bob Mayer, a best selling author and publisher. The panel will discuss the current state of publishing from the “traditional” to “indie” paths, how publishing has changed, why bloggers should write a book (or become a publisher), how to choose your publishing path, pitfalls to avoid, and how to leverage social media and blogging to build your author platform.

Bridging the Gap Between Bloggers and Publishing This publishing panel features Layla Morgan Wilde, Janiss Garza, Alana Grelyak, and Deb Barnes. The session will be a “how to use your blog as a springboard to professional publishing” by learning how to write, research, edit, and design your blog posts in such a manner that they become a portfolio of quality work to help open the door to publishing deals. The full BlogPaws speaker schedule, hotel/travel and registration information is available by clicking the box at the left. Cat Writers Association members should have received the discount code for attending the event. If you have not received your code, please email President Marci Kladnik. Have questions about this collaboration? Look for answers here. 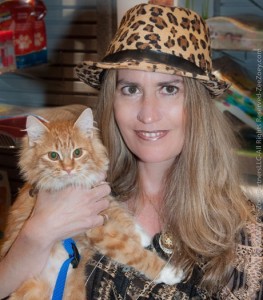 Deborah Barnes and her cat, Jazmine

DEBORAH BARNES resides in the tropical paradise of South Florida and is the author of The Chronicles of Zee & Zoey – A Journey of the Extraordinarily Ordinary starring her feline family as well as the award winning blog, Zee & Zoey’s Chronicle Connection that covers the everyday journey she shares with her cats (including newest additions – rescue kittens Kizmet and Jazmine) as well as topics from the humorous behaviors of cats to very serious subjects on pet responsibility. Her current circle of works has brought her to where she is today – a contributing writer for Catster.com and Cat Fancy Magazine as well as Secretary of the nonprofit, Pawsitively Humane, Inc. of Miami, Florida, whose mission is to create public awareness and reduce the numbers of animals on the streets and in shelters through an extensive educational campaign. 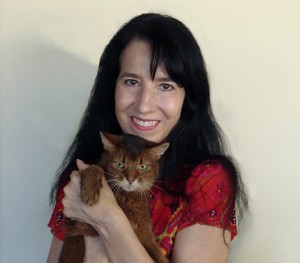 JANISS GARZA has alternated between writing and editing for over 25 years, first in the world of rock journalism and later on in the fields of vintage film, fitness and cats. She learned the craft of editing at Music Connection magazine, was senior editor for seven years at legendary hard rock magazine, RIP, and copy edited for bilingual style magazine Estylo. Her writing credits include the Los Angeles Times, L.A. Weekly, Entertainment Weekly, the Allmovie Guide, Yahoo Music, Cat Fancy, Catster.com, CatChannel.com and the award-winning blog, Sparklecat.com. Janiss is the co-author of White Line Fever with Lemmy Kilmister of the cult band Motörhead, and ghostwriter for Sparkle the Designer Cat’s two books, Dear Sparkle: Advice From One Cat to Another and Dear Sparkle: Cat-to-Cat Advice From the World’s Foremost Feline Columnist. For FitCat Publishing, her indie imprint, she had edited and overseen the anthology Rescued: The Stories of Twelve Cats, Through Their Eyes, which includes stories from a dozen hand-picked writers. 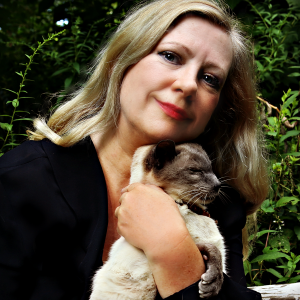 LAYLA MORGAN WILDE, the multihyphenate founder and managing editor of Cat Wisdom 101 is a holistic cat expert and the official cat behaviorist for Tara The Hero Cat. Layla is an award-winning writer/blogger/photographer and animal advocate/pet industry influencer/speaker. In 2014 she was elected to the CWA council and is a contributing writer for Petfinder.com, Catster.com, Victoria Stilwell at Positively.com. In 1997, Layla founded the Annex Cat Rescue in Toronto, Canada and is a passionate volunteer at the New Rochelle Humane Society where rehabs and fosters cats. She lives in an antique farmhouse in Westchester County, NY. with a filmmaker husband and a bevy of pampered cats. 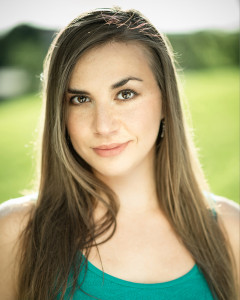 ALANA GRELYAK has been a writer and photographer for many years, and her work has been published in Time Out Chicago, CMA Today, Lumino Magazine, Laughspin, and various other publications. She has photographed numerous moving targets including rock stars, comedians, and cats, the last of which offer the greatest challenge. She is now the Editor in Chief of CatInTheFridge.com, where she advocates for animals that some might see as less adoptable but that she sees as very, very special. She is also the primary script writer, actor, and composer for the CATastrophes web series, where funny things happen when cats appear. She lives with her husband, dog, and multiple cats in Chicago, IL.

AMY SHOJAI, CABC is a certified animal behavior consultant, and the award-winning author of 30 best selling pet books that cover furry babies to old-fogies, first aid to natural healing, and behavior/training to Chicken Soup-icity, as well as dog-viewpoint THRILLERS WITH BITE! She has been published by major New York publishers, smaller regional presses, and has self-published Ebooks, print and audio titles and considers herself a Hybrid Author. Amy is a founder of the Cat Writers Association, Inc.

She created the Puppies.about.com site as the Puppies Expert, was the cat behavior expert at cats.About.com, and hosted an award-winning Pet Peeves radio show. Amy has been featured as an expert in hundreds of print venues including The New York Times, Reader’s Digest, and Family Circle, as well as national radio and television shows including the Today Show, CNN, Animal Planet DOGS 101 and CATS 101. She’s been a consultant to the pet products industry (including PetHealthyStore and Perfect Litter). Amy is also a musician, actor and playwright of STRAYS, THE MUSICAL and other works, and brings her unique pet-centric viewpoint to public appearances and performances, audio books (her own and others), writer webinars, and conference keynotes/seminars.

A creative force who loves to turn a great story into a visual spectacle, LISA ERSPAMER is a five time Emmy-nominated producer and the president of Unleashed Media, a television, film and digital production company in Los Angeles. Prior to starting her own multi-media company, Lisa served as the Chief Creative Officer and Executive Vice President of Programming and Development for OWN: The Oprah Winfrey Network where she launched over 40 original series and created 7 original documentaries in less than two years. Lisa also served as Co-Executive Producer of The Oprah Winfrey Show, where she produced hundreds of shows and oversaw such memorable episodes as the biggest Flash Mob in history, the legendary car giveaway, Oprah’s After Oscar Specials, Oprah’s Favorite Things, Whitney Houston’s final interview, and many others. Lisa is the creator of the bestselling book series A Letter To… which includes books: A Letter To My Dog, A Letter To My Cat and upcoming A Letter To My Mom.She currently lives in Los Angeles with her two precious pups, Lily and Grace and is working on her next book, A Letter To My Baby! 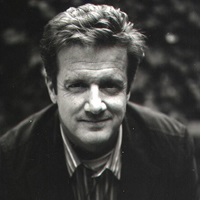 BOB MAYER is a NY Times Bestselling author, graduate of West Point, former Green Beret (including commanding an A-Team) and the feeder of two Yellow Labs, most famously Cool Gus. He’s had over 60 books published including the #1 series Area 51, Atlantis and The Green Berets. Born in the Bronx, having traveled the world (usually not tourist spots), he now lives peacefully with his wife, and said labs, at Write on the River, TN.   Cool Gus Publishing is one of the most successful author-generated publishing partnerships with sales ranking in the top 1%, and numerous titles selling into the top 100 in their genres on Kindle, PubIt and other e-book platforms, including a #2 National Bestseller on BarnesandNoble.com and two separate #1 science fiction bestsellers on both US and UK Kindle.   Cool Gus Publishing was originally created by Bob Mayer and Jen Talty as a platform to reissue his extensive backlist. With the great success they had with the re-publication of books like the Atlantis Series and The Green Beret Series, Cool Gus opened its doors to other authors and their backlist and frontlist. We have also launched a Write It Forward series dedicated to helping authors achieve their dreams. Our latest partnership is with NY Times Bestselling Romance Author Jennifer Probst. The Posse Series will be launched in early 2014.   We are looking to partner with a few published authors who wish to experience the highest royalty rates, along with the extensive freedom and control of “self-publishing” as a hybrid author, a term Bob coined in June 2011. Authors gain the advantage of our years of experience and our focus on making the author’s career the priority and using the tools and tactics available to also support their traditional publishing careers. If you are interested, please contact Bob at coolgus.com. It is a great time to be an author!

PAM JOHNSON-BENNETT is the host of Animal Planet UK’s “Psycho Kitty” and the best-selling author of 8 books. She is a certified cat behavior consultant and the former vice president of the International Association of Animal Behavior Consultants. Pam is the founder/former long-time chair of the IAABC Cat Division. She served on the American Humane Association’s Advisory Board on Animal Behavior and Training and The American Humane Association’s Forum on Cat Health and Welfare. She is currently a member of Tree House Humane Society’s Advisory Board. In addition to her television series, Pam makes numerous national media appearances and lectures on behavior around the country. She owns Cat Behavior Associates, a private veterinarian-referred behavior company based in Nashville, TN. Her website is www.catbehaviorassociates.com.