World Rabies Day is September 28 and the American Veterinary Medical Association (AVMA) is using the opportunity to remind pet owners and the general public to stay vigilant and proactive in rabies prevention. 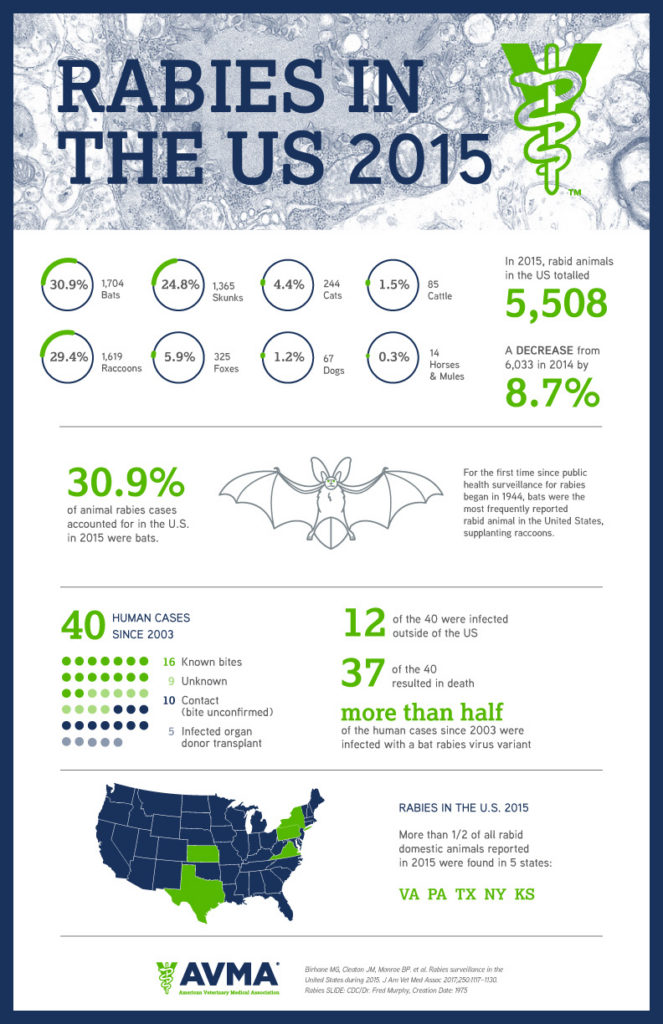 Created in 2007 by the Global Alliance for Rabies Control, World Rabies Day aims to raise community awareness of the disease and its prevention around the globe. The theme of this year’s World Rabies Day is “Zero by 30,” with the goal of reaching zero human deaths from canine rabies by the year 2030.

Though rabies is not a widespread concern in the United States due to the prevalence of rabies vaccinations, the disease kills more than 60,000 people around the world each year.

“Rabies is a fatal disease that is 100 percent preventable,” said Dr. Mike Topper, president of the AVMA. “We have been very successful at keeping rabies at bay in the United States, but it’s important that the public not become complacent. Pets must continue to be vaccinated against the disease and all pets and people should avoid coming into contact with wild or stray animals—even the cute ones.”

In 2015, the number of rabid animals reported in the United States totaled 5,508, which constituted an 8.7 percent decrease from the year before. The majority of rabies cases appear in wildlife animals such as bats, raccoons, skunks and foxes.

The AVMA promotes rabies prevention through a variety of resources, including this rabies research podcast, a rabies brochure for veterinary clinics, and rabies-centered education.

The Reaching UP program is another way the AVMA combats rabies in the United States. Born of a partnership between AVMA and the Native American Humane Society (NAHS), Reaching UP provides high-quality, high-volume (HQHV) spay/neuter services and preventive care services—including rabies vaccinations—to animals in underserved Native American communities. Through community education and the administering of vital services, AVMA volunteers are able to make a significant impact in populations that would otherwise not have access to standard veterinary care. Last year, 31 veterinary volunteers at three Reaching UP clinics served 850 animal patients.