(New York – August 31, 2015) – Fresh off Assisi Animal Health’s introduction of two versions of the Assisi Loop® 2.0 at last month’s American Veterinary Medical Association Annual Conference, the company is so enthused by the positive response from the veterinary profession, it is rapidly moving forward with its expanded product line. Assisi Animal Health recently received its final trademark for NPAID® (Non-pharmaceutical anti-inflammatory device) and will be introducing new products next year, beginning with a line of wearables designed to accommodate the Loop. 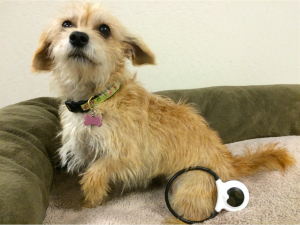 A Terrier mix, named Winter, being treat with the Assisi Loop 2.0 for stifle inflammation.
Photo by Jenny Jones from SAGE Centers for Assisi Animal Health

Pain management and an evolving pain-awareness culture in veterinary medicine have been at the forefront of virtually every major veterinary convention this year and promise to be positioned similarly in 2016.

In addition, the International Veterinary Academy of Pain Management will celebrate Animal Pain Awareness Month in September. The theme of the campaign is “Because Their Pain is Our Pain.”

Further recognition of the subject came earlier this year when the American Animal Hospital Association and American Association of Feline Practitioners released revised pain-management guidelines for dogs and cats, based on the wide array of advances in the field since their last guideline release in 2007.

Since pain management doesn’t stop in the veterinary office, the Loop offers owners and practitioners a new dimension for their treatment toolbox – at home.

The Assisi Loop® 2.0 is a noninvasive coil wire loop that rests on the injured part of the body to provide healing and reduce inflammation for dogs, cats and horses.

The Loop sends a targeted pulse electromagnetic field (tPEMF™) from outside the body without touching the skin and penetrates through bandages, casts, fur, hair, etc. The tPEMF produced by the Loop triggers a micro current to flow into the inflamed tissue, setting up a biological process that increases the production of nitric oxide, a critical chemical in the healing process.

The Loop is priced at $269 (suggested retail, discounted to veterinary professionals) and available at many veterinary hospitals nationwide or by prescription from veterinarians. It delivers 150 treatments of approximately 15 minutes. The cost is covered to varying degrees by many pet-insurance companies.

The technology was originally cleared by the U.S. Food and Drug Administration (FDA) for use in humans as a post-operative treatment of pain about seven years ago. Assisi purchased the animal health rights from the owners, Ivivi Health Sciences.

Although no further regulatory approval is required for use in animals, says Francis Russo, Chief Operating Officer of Assisi Animal Health, the company is funding clinical trials for the product.

Non-steroidal anti-inflammatory drugs (NSAIDs) are the primary therapy mode for treating pain in animals, yet account for the largest number of adverse drug reactions reported to the FDA, says Russo. Primary problem areas for toxic reactions are gastrointestinal, liver and kidney. This is particularly of concern as pets age.

Russo emphasizes the Loop can be used as a complementary or independent treatment with NSAIDS in dogs, cats and horses, although its use in canine cases far outnumbers the other two species.

In addition to introducing the Loop to veterinarians at major conventions, Assisi sponsors several continuing-education programs for practitioners. “Working closely with veterinarians is a top priority for the company,” says Russo. “We know the faith and confidence pet owners place in their veterinarian and believe the Loop offers them an exciting new treatment option for a variety of cases they face.”

The Loop also shows promise as a key monotherapy or complementary treatment tool to acupuncture, chiropractic and NSAIDs for competitors in agility, obedience and tracking who often incur injuries in training or the competition ring.

One of the Loop’s proponents is Dr. Erin Troy, a Walnut Creek, Calif. veterinarian. She says, “When I talk to the staff, I tell them it’s like laser or acupuncture – we have to have a sense of what we’re treating and where before we just throw the Loop, the laser or the needles at them. I talk to families very frankly about [the Loop], that it’s non-invasive and that there are no side effects – two things I cannot say about drugs. There’s no blood test monitoring to go with it. There’s a good amount of human literature that supports the technology behind it, because we certainly do have some clients more discriminating than others.”

Troy says her practice has an 80 percent compliance rate with the Loop.

Veterinarians can order devices for their patients by contacting their independent distributor or by calling toll-free 1-866-830-7342. Owners and practitioners can obtain more information from the company’s web site, www.assisianimalhealth.com.

Assisi Animal Health was acquired in 2013 by Dr. John Wilkerson, a successful medical industry entrepreneur and life science growth investor. Assisi Animal Health is a science-based company specializing in offering clinical therapeutic solutions to veterinarians or by veterinary prescription only to pet owners. Based on its philosophy of a Circle of CareTM, the company helps veterinary professionals and pet owners join to provide the optimal level of care for animals. For more information, visit www.assisianimalhealth.com. Twitter @assisiloop or Facebook Assisi Pain Relief for Pets.