REGISTER TO RECEIVE NEWS UPDATES >>
You are at:Home»Media»Books»Animal Madness: A Book Review
By Ranny Green on August 11, 2014 Books, Media, Review

It’s maddening when you maneuver through one chapter after another recognizing how man treats other species on Planet Earth. 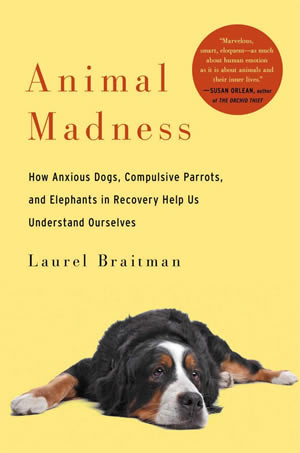 Ironically, the instigator for this international study of free-roaming, laboratory and zoo subjects is Oliver, an anxiety-ridden adult Bernese Mountain Dog the author and her husband Jude impulsively fall in love with at first sight. She writes, “It felt more like a physical sensation than a conscious decision. It certainly wasn’t rational. We brought him home that same afternoon.”

And what follows is a life-changer, plenty of angst and an uncharted pathway for this well-grounded work into the trigger mechanisms and parallels for everything from dogs’ separation anxiety, self-harming aquarium and zoo residents to depression, suicide and post-traumatic stress disorder in man.

“Identifying mental illness in other creatures and helping them recover also sheds light on our humanity,” she says. “Our relationships with suffering animals often make us better versions of ourselves.”

The 120-pound Oliver’s distress is manifested by barking, destruction of everything from pillows to floorboards and finally a leap through the couple’s Washington, D.C., apartment fourth-floor kitchen window (more than 50 feet to the ground) witnessed by a neighbor boy from his kitchen, who yelled, “Mom, a dog fell out of the sky!”

Oliver survives and lives another two years, but not without numerous incidents and plenty of attempts for help by the owners. Depending on the couple’s proximity to him, Oliver sports twin personalities. “If we were with him . . . Oliver was the picture of calm,” says the author. “Alone he was a tornado.”

Ultimately, his undoing is chewing and swallowing wood, which prompts a “horrid” case of bloat that results in him being euthanized.

Following Oliver’s death the couple divorce, yet Braitman doesn’t pen the breakup totally on his passing. “Dogs have a way of gluing people together, even ones who are already coming unglued.”

Recognizing that Oliver’s frustrations mimic man’s, Braitman begins an insatiable search for behavioral answers, not only in respect to the dog but countless other species ranging from the “emotional thunderstorms” of laboratory mice and elephants in Southeast Asia, to a wide mix of captive creatures in aquariums and zoos worldwide.

“One anxious dog brought me the entire animal kingdom. I owe him everything,” she says.

Environment, interaction with other members of their own species and bonding with humans are key factors in maintaining an animal’s psyche we learn in dozens of compelling anecdotes throughout the narrative that segues to veterinary behaviorists and keepers/caretakers, some of whom are big proponents of antidepressants in challenging cases.

The biggest consumers of psychotropic drugs are not zoo animals but the ones who live with us, the author notes, for which we spend millions annually.

Each reader will find a particularly resonating vignette here. For me, it’s this one profiling Jokia, a blind elephant in Northern Thailand that once worked as a logging hauler.

“She was pregnant about to give birth, but her owners refused to give her time off from dragging logs. She birthed her calf while walking up a large mountain, and her baby, still in the amniotic sack, rolled to the bottom of the trail and died. Soon thereafter Jokia began refusing to work. Her mahout shot out one of her eyes with a slingshot, hoping to blind her into obedience. She worked for a few weeks and then refused again. The mahout stabbed her other eye with a knife, blinding her completely, hoping that in the total darkness she would be more submissive, more dependent, and more likely to work.

“Jokia, stubborn and injured, still refused to do what was asked of her.” A few years later a Karen woman who was the founder of Elephant Nature Park, purchased Jokia for $2,000 and brought her to the park, where the pachyderm made friends with an inquisitive female that also once worked as a logging carrier. Soon the pair became inseparable, eating and bathing alongside each other.

“Every animal with a mind has the capacity to lose hold of it from time to time,” says Braitman, who emphasizes that against all odds “many creatures thrive, or at the very least, exhibit the kind of behavior that looks a lot like resilience.”

“Animal Madness” serves up an edgy blend of tension and passion that deftly balances frustration and fascination of a wide array of subjects from the jungle to the living room. While taking the reader on an emotional bumpy ride, it educates and entertains around every sharp corner.

This review was originally published on Seattle Kennel Club August 1, 2014.