REGISTER TO RECEIVE NEWS UPDATES >>
You are at:Home»Media»Books»“Among the Wolves”
By Ranny Green on September 15, 2015 Books, Media
This review is by Ranny Green and originally ran on the Seattle KC website September 1, 2015. 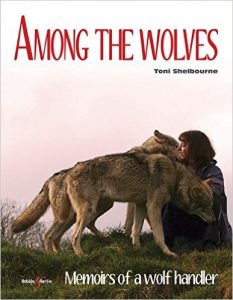 I read—and only wished it could have been me up close and personal with these mesmerizing and sometimes mystical creatures.

Shelbourne worked for the UK Wolf Conservation Trust from 2001–2010, where she served as a senior wolf handler and education officer while bonding closely with 11 wolves of all ages, each of which boasted a name and individual identity.

With a jeweler’s eye for detail, her penetrating character studies and portraits interlock like gears with colorful details from a diaryesque approach of the injured Alba (spinal injury) to raising a “Brat Pack” of cubs named Torak, Mosi, Mika and Moi, which you readily identify with through several weeks.

Shelbourne interacts with the wolves in just about every way—handling (Tellington TTouch), nursing and bottle feeding, feeding, treating a wide gamut of ailments and eventually being with them to say goodbye at their passing.

“Their physical and mental strength is far superior to ours,” she writes, “making us the more vulnerable, yet, somehow, it’s possible to build a friendship, gain their trust, and walk among them.”

Recognizing she is in an exclusive club—working with socialized wolves—the author cherishes that role while never forgetting the responsibility of that intimacy 24/7 with her four-legged pack mates.

She is amidst the park’s wolves at all hours, but her favorite time is dawn, a soothing point that “amplified awareness of the changing seasons and helped me to feel more connected to nature.”

As a newbie volunteer, she guides the reader through the challenges of controlling the wolves while establishing a trust. “It can easily take six months to a year to build a relationship—longer with some individuals—and with others you never feel that they have accepted you; you’re simply tolerated, or maybe even rejected,” she says.

In a closing chapter entitled “Afterlife,” Shelbourne tackles the ethics of captive animals, writing, “In my perfect world zoos would look very different, and even not exist at all. The recent advances in the study of animal emotions gives even more credibility to the argument that certain species—those who exhibit autonomy, self-awareness and emotions, for example, and who forge strong social bonds, should be afforded the status of personhood (the cultural and legal recognition of the equal and unalienable rights of human beings).”

If captive, but not socialized to humans, wolves remain fearful of us while nagged with an off-the-charts daily stress level, Shelbourne emphasizes.

The author’s staggering intimacy and understanding of her subjects is the heart and soul of this evocative memoir, which is a must read for anyone interested in this species, a predecessor of that dog sitting alongside you.

A Seattle Times pets columnist and feature writer for three decades before retiring in 2008, Ranny Green writes monthly features and book reviews for the Seattle Kennel Club. He is also the former president of the Dog Writers Association of America, a five-time recipient of the DWAA’s columnist of the year award and a six-time winner of the DWAA feature writer of the year for newspapers over 150,000 circulation. He is also a member of the prestigious DWAA Hall of Fame.