Six military hero dog teams to be featured on parade float, honored for their service protecting our troops

NEW YORK, November 11 – On Veterans Day, the 21,000 patriotic participants in the annual, nationally televised parade honoring our troops will be joined by a number of four-legged heroes – our nation’s military dogs – along with their two-legged hero handlers and some of the country’s top celebrities  and veterans advocates. 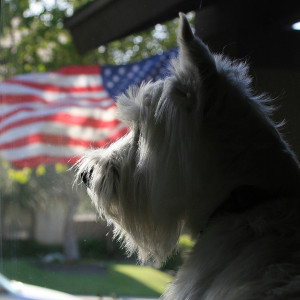 Six military hero dog teams, each of which save the lives of an estimated 150-200 servicemen and women, will be saluted by America on their own parade float, joined by Army veteran, “Law and Order” star and dog lover Ice-T and his wife Coco; philanthropist and veterans advocateLois Pope; animal star Hudson, who played “Willie Nelson” in the film “Our Idiot Brother”; and American Humane Association President and CEO Dr. Robin Ganzert, who has spearheaded the repatriation and reunification of these military dogs and 14 others with their former handlers this year alone with the help of Mission K9 Rescue and the U.S. War Dog Association.

“The thousands of dogs who serve in our nation’s military have sacrificed so much,” said Mrs. Pope, who founded and chaired the American Veterans Disabled for Life Memorial that was recently dedicated in Washington, D.C., and underwrote the effort to include these military hero dog teams in this year’s America’s Parade. “They are often the first line of defense, sniffing out bombs, mines, and other explosive devices. As they did on the battlefield, they can save lives here at home, just by being a companion to the veterans with whom they served. I’ve witnessed the profound impact that these dogs can have on them. It is my honor to support the efforts of American Humane Association, its K9 Battle Buddies program and its participation in the Veterans Day parade.”

“I served in the Army and know the life-saving heroism of these dogs,” said Ice-T. “It is time that we recognize both our human veterans who sacrificed so much and our four-legged veterans who save lives on the battlefield – and at home – every day.”

“These dogs are genuine heroes and deserve to be recognized on Veterans Day, alongside the human heroes who have so faithfully served our country,” said Dr. Ganzert. “We hope that this parade will shine a spotlight on the service of these under-recognized soldiers.”

Despite their heroic work, military dogs do not always come home when the men and women with whom they served end their tours of duty and return home. While many are returned, neither the military nor contractors are required to bring these brave warriors home so they can be retired in the U.S. and reunited with their handlers with whom they have formed such a deep and lasting bond. To help, American Humane Association has brought home 20 military hero dog teams this year alone with the help of Mission K9 Rescue and the U.S. War Dog Association.

Corporal Jeff DeYoung & MWD Cena (“He’s not my best friend. He’s my brother.”)
This brave pair served together in the United States Marine Corps and served one tour of duty in together from October 2009 to April 2010 as part of Operation Moshtarak, the largest military operation in Afghanistan at the time. Cena served a total of four years in the military, and was separated from Corporal DeYoung for four years, one month, and eight days. They had a tearful reunion on June 5, 2014 and the pair now lives in Muskegon, Michigan.

Staff Sergeant Jason Bos & MWD Cila
Sgt. Bos and Cila served together in the Army Military Police for nearly five years – including one 12-month deployment in support of Operation Enduring Freedom in 2008 and 2009. Cila served for nearly seven years in total, and was separated from her brave human handler for a year-and-a-half. Their reunion at Chicago O’Hare International Airport on April 30, 2014 made local and national headlines. They live in Grand Rapids, Michigan.

Staff Sergeant James Harrington & MWD Ryky (pronounced “RYE-key”)
Staff Sergeant James Harrington, a native of Kenner, Louisiana, served in the Marine Corps from 1995 to 2002 and then in the Army from 2003-2012 as a military police officer. He is currently stationed in Louisiana with the National Guard as a military police officer. MWD Ryky is a seven-year-old specialized Improvised Detection Dog who helped detect explosives. She served with Harrington for four years on two combat deployments in Iraq from 2008 to 2009 and in Afghanistan from 2010 to 2011. The pair was reunited in New Orleans on June 26, 2014.

Corporal Jonathan Cavender & MWD Maxi
Marine Corps Corporal Jonathan Cavender reunited in Houston on August 28, 2014 with MWD Maxi, a Belgian Malinois with whom he served with for two years in Japan. Maxi is a 12-year old specialized Improvised Detection Dog who helped detect explosives while on deployment in Iraq and served as a military police dog in Japan. Maxi served with Corporal Cavender for two years at the Marine Corps Air Station in Iwakuni, Japan. Corporal Cavender, a native of Richmond, Texas, is currently based in Lackland Air Force Base in San Antonio.

Sergeant Omar Peña & CWD Mariah
In 2009, Mariah, an Improvised Detection Dog, was assigned to now-retired U.S. Marine Sergeant Oscar (Omar) Peña for seven months while he was deployed in Afghanistan. In one instance, Mariah detected explosives in three different areas, which allowed the Marines to divert their movement and set an ambush for the Taliban at night. There were also times when the playful nature would get the best of her. In the same mission, Mariah was supposed to check a compound for explosives but a lake nearby caught her attention instead. After seven months of serving with Sgt. Peña, Mariah was assigned to another handler. Sgt. Peña returned home in 2012 but didn’t forget his partner and “sister” Marine. On Thursday, July 10th in El Paso, TX, Mariah and Sgt. Peña, were reunited for the first time since 2010. They live in El Paso, Texas.

Corporal Nick Caceres & MWD Fieldy
After over three years apart, U.S. Marine Corps veteran Corporal Nick Caceres was reunited with Fieldy, the Contract Working Dog (CWD) he served with in Afghanistan. The reunion took place at Valley International Airport in Harlingen, Texas. “I trusted him with my life and he never me down,” said Caceres of his service with Fieldy in Afghanistan. “The bond we shared was so special and I’m so thankful to be able to adopt him and care for him in his retirement.”

In addition, Ruby Ridpath & retired Patrol/Explosive Detector Dog Alik will be with the American Humane Association contingent, as will Amy McCullough and Butler the Weather Channel Therapy Dog, who
travel to communities struck by disasters to offer help in the coping and healing process.

If you would like to give recognition to a four-legged veteran and interview a military hero dog team, Ice-T, Coco, Dr. Ganzert and/or philanthropist Lois Pope, please emailmarks@americanhumane.org or call 202-380-8964.

Feature photo by Randy Robertson, used under a creative commons license. No changes were made.