While the hotbeds of heartworm disease haven’t changed dramatically in the past three years, the incidence numbers reported by participants in the 2016 American Heartworm Society (AHS) Incidence Survey indicate that the average number of positive cases per veterinary clinic has been inching upwards. The AHS announced its latest survey data, along with unveiling a new heartworm incidence map based on data from veterinary practices and shelters across the country.

The average number of dogs diagnosed per clinic in 2016 rose by 21.7 percent over 2013 numbers, according to AHS President Christopher Rehm. “When veterinarians study our new heartworm incidence map, they will note that the distribution of heartworm cases hasn’t changed dramatically since we surveyed veterinary practices three years ago. What caught our attention is that the number of heartworm-positive cases per practice is on the rise.” 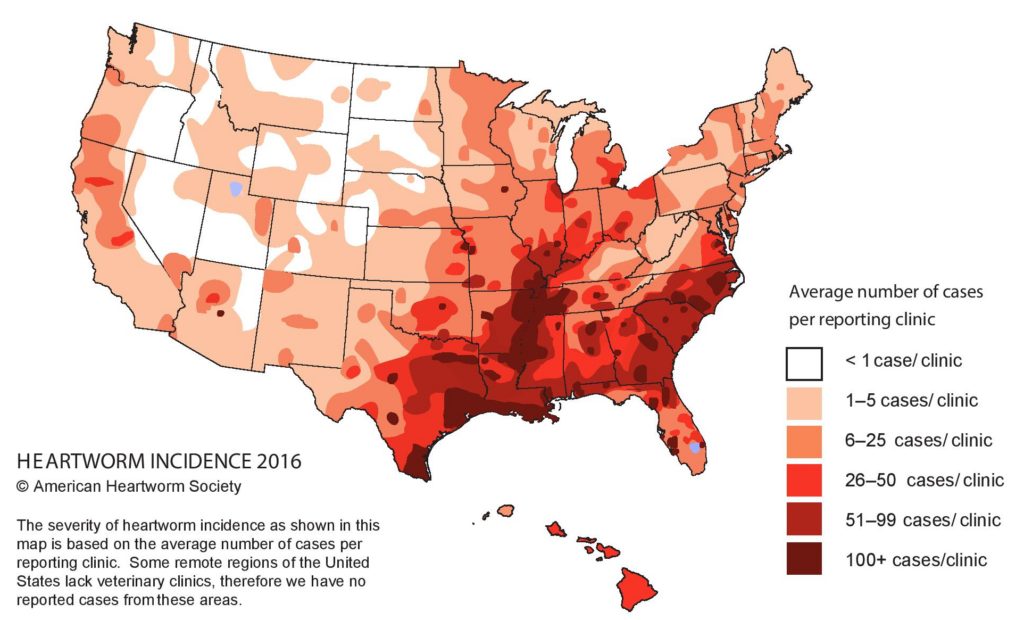 Heartworm infection diagnosed nationwide
No state in the U.S. is heartworm-free, according to the AHS survey, which revealed the top five states in heartworm incidence were Mississippi, Louisiana, Arkansas, Texas and Tennessee—all states that have been in the top tier since the AHS began tracking incidence data in 2001. Rounding out the top ten states were South Carolina, Georgia, North Carolina, Alabama and Florida. Among the top ten, only Alabama, Louisiana and Texas saw decreases in the per-practice averages of dogs diagnosed, while increases were noted in the other seven.

Other factors believed to contribute to incidence increases in certain regions were weather conditions conducive to heartworm transmission in 2016 and the movement of infected dogs into practice areas. Insufficient efficacy of heartworm preventives was only considered a factor by 3.3 percent of those veterinarians who saw incidence rise.

“We see the results of the AHS Incidence Survey as a good news/bad news story,” says Rehm. On one hand, heartworm incidence has increased in a number of states, especially those states in the most heartworm-endemic areas of the Southeast, Mid-South and Delta regions. On the other hand, veterinarians are telling us that there is a straightforward answer to this: (1) convince more pet owners to use preventives and (2) convince them to protect their pets year-round—with no lapses.”

Veterinarians utilize AHS resources
According to the AHS survey, 77 percent of veterinarians reported that they follow the AHS guidelines on prevention, diagnosis and treatment of heartworm disease, while roughly half of practitioners utilize resources on the AHS website. “At AHS, our goal is to educate veterinarians, shelter personnel and pet and owners, and to be a resource to veterinary professionals who are committed to reducing heartworm incidence,” Rehm concludes.