REGISTER TO RECEIVE NEWS UPDATES >>
You are at:Home»Cat News»The Most Famous Cat in New York City is Celebrated in New Children’s Book—”Matilda, The Algonquin Cat” is for Cat Lovers and Literary-History Fans of All Ages
By Good News For Pets on October 3, 2016 Cat News, News, News Release, NYC, Pet News

“Matilda, The Algonquin Cat” is a picture book about the life of Matilda, the feline-in-residence since 1932 at the legendary Algonquin Hotel in New York City. 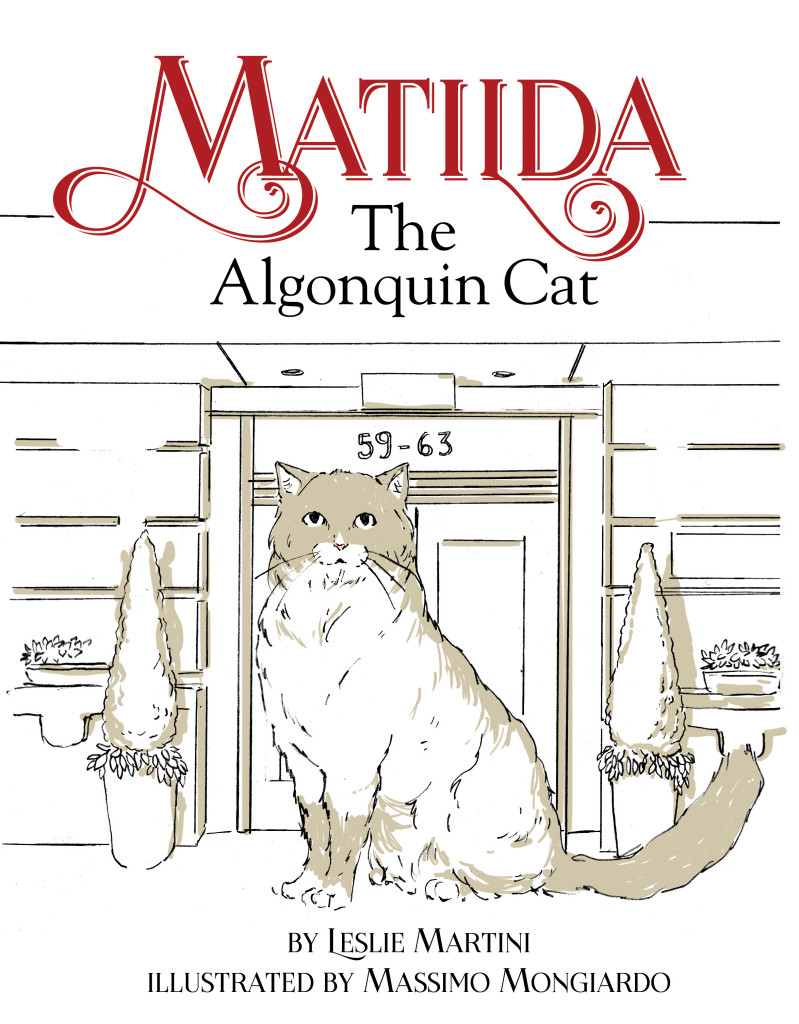 Boston journalist Leslie Martini partnered with New York illustrator Massimo Mongiardo to capture the comical day-to-day antics of the famous cat in lyrical text and traditional pen and ink drawings. Literary history mixes with a grumpy feline attitude to honor some of the hotel’s most famous patrons including Al Hirschfeld and John Barrymore, while showcasing the birthplace of The New Yorker—which is given to every guest who stays at The Algonquin.

“The Plaza may have Eloise, but the Algonquin has Matilda! Pull up a chair at the Round Table because Leslie Martini’s new picture book is the cat’s meow,” raved Carol Weston, author of “Ava and Pip” and “Girltalk.” Kirkus Reviews wrote: “An appealing, humorous introduction to a legendary hotel through a cat’s eyes.” It is available in a gift-giving hardcover, an affordable paperback, and on Kindle: http://www.amazon.com/dp/1942545444.

Artwork from “Matilda, The Algonquin Cat” graced the invitations for The Algonquin’s 10th Annual Cat Fashion Show on August 10, 2016, which attracted celebrities and high-profile media, fashion designers, and NYC elite. A set of commemorative postcards with book illustrations were included in gift bags for everyone in attendance, and posters based on the book were signed by the author and illustrator and auctioned at the event to help raise over $10,000 for the Mayor’s Alliance for NYC’s Animals.

New York Times bestselling author Mary Jane Clark praised, “‘Matilda’ is a perfect gift for the child you love. A very inquisitive and extremely lucky cat finds a home at a legendary New York City hotel and the guests and staff are charmed. You will be too!” Marci Johnson, creator of “Glamour Girls Guide” and the forthcoming “Martini Diaries,” reviews, “My ten-year-old son is a voracious reader and he gives ‘Matilda the Algonquin Cat’ two thumbs up! Once he opened the book, he didn’t stop until the last page was turned. This story delighted our entire family. As a mother and a writer who has been a longtime fan of the literary history of the Algonquin, I was thrilled to introduce this magical story to my children. Matilda is destined to enchant generations of families.” Nicholas Sciammarella, manager at The Algonquin reviewed, “It’s perfect,” and is making the book the centerpiece for fall activities at the hotel. Mackenzie Dawson focused on an endearing side of the story in the Sunday, September 18, 2016 edition of The New York Post.