The American Kennel Club (AKC®), the world’s largest purebred dog registry, announces the launch of its newest award, the AKC Paw of Courage, in an effort to show appreciation for the many sacrifices that working dogs make while serving and protecting our country. This award specifically recognizes the extraordinary sacrifices of dogs who have been severely injured or killed in the line of duty.

“These working dogs possess great courage and dedication,” said AKC Vice President Gina DiNardo. “They continuously put their lives on the line, and have sacrificed their own safety, well-being, and in some cases even their lives, to keep us safe. Each dog awarded with the AKC Paw of Courage has made a significant sacrifice in the line of duty.”

The first 2016 AKC Paw of Courage recipients are: 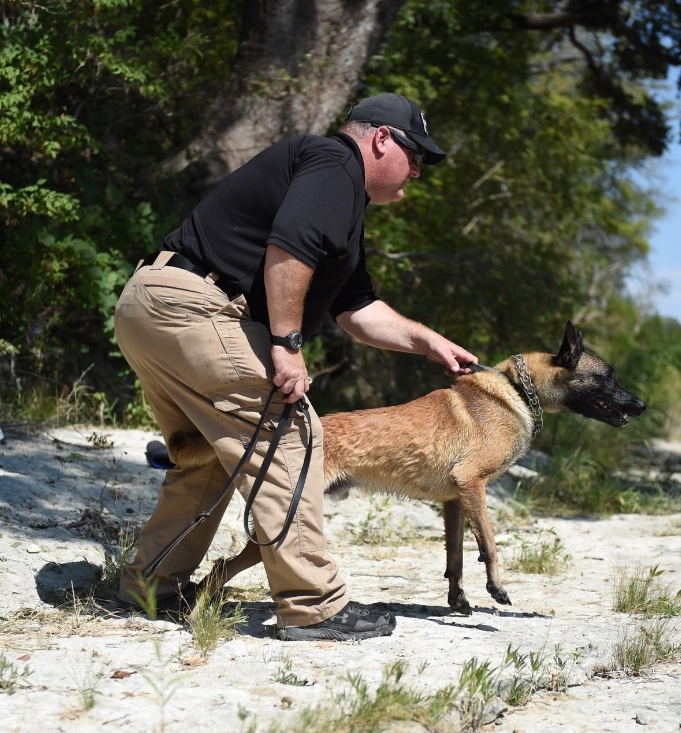 K9 Ogar, a one-year-old Belgian Malinois of Smith County Constable’s Office in Texas, was shot and killed while attempting an apprehension this past January. K9 Ogar and his handler, Deputy Constable Kevin Petty, were conducting a routine traffic stop when a vehicle fled, leading to a pursuit. The vehicle was wrecked and the subject evaded on foot into a wooded area, and K9 Ogar was deployed. During this confrontation, K9 Ogar was shot and killed. Deputy Constable Petty says, “Ogar sacrificed his life to save mine.” He says that Ogar was always right by his side and looked at him with true love and devotion.

When K9 Ogar was not on duty he was like any other family dog. He loved to run circles around the swimming pool with Deputy Constable Petty’s two young girls. He also enjoyed playing tug of war and catch and was a master escape artist. From the moment he was brought home by his handler, he fit right in with the family. According to his handler, Ogar had mastered the combination of being both soft and strong simultaneously. He loved any attention he could get and in exchange, all he asked for was love. K9 Ogar touched many lives in his time as a K9 officer and he is dearly missed each and every day. 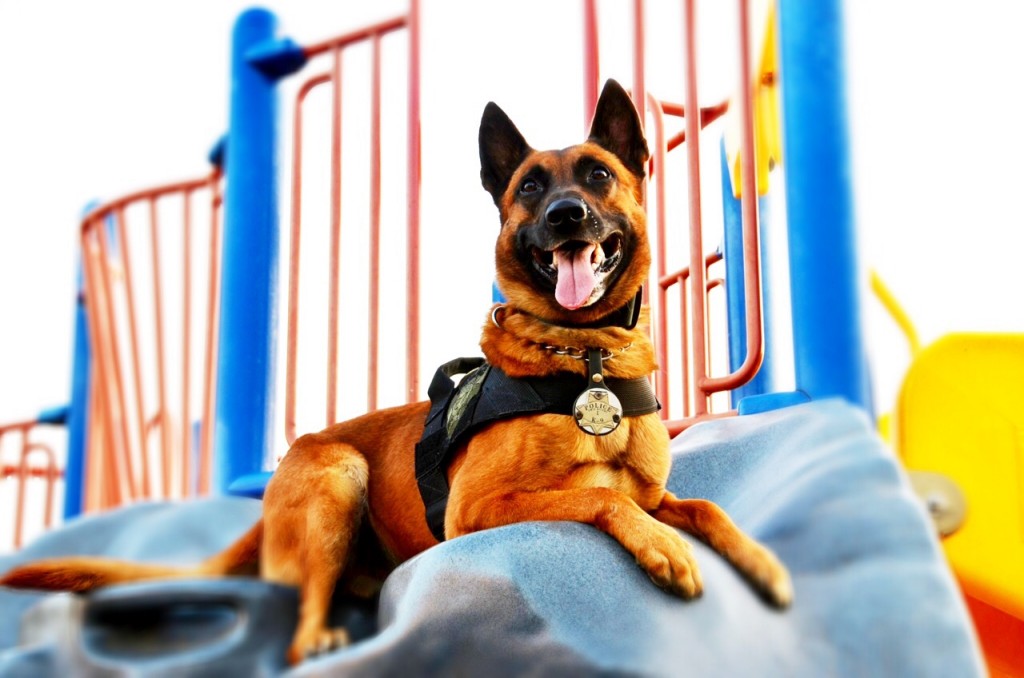 K9 Jag was an eight-year-old Belgian Malinois who served with the Twin Rivers Unified School District Police Department for five years. During his annual state certification, he was struck by a vehicle. “K9 Jag was everything a handler and a school Police Department could want. He knew his job and did it well,” says his partner, Sergeant Arlin Kocher. He describes Jag as intense, energetic, sweet and powerful. K9 Jag was the first ever Twin Rivers Unified School District Police Department’s canine. He excelled in every aspect of his career; credited with hundreds of narcotics searches, over 50 suspect surrenders and three apprehensions throughout his time in the department.

Equally as important, K9 Jag also spent a ton of time doing public outreach in the schools and nearby communities. Students, staff and parents looked forward to seeing Jag on a daily basis. He was adored for being sweet and friendly while also serving as their fierce and dependable protector.

Throughout his career, K9 Jag competed in countless events and won numerous awards. According to his partner, Sgt. Kocher, K9 Jag wouldn’t let anyone leave a room without petting him. At the end of his shift, he was always eager to go back to the Police Department where the fellow officers were waiting, for what he thought was just to play with him. K9 Jag is sorely missed by Sergeant Kocher as well as the entire Twin Rivers USD as a uniformed working dog as well as a family dog.

K9 Betcha was a two-year-old Australian Cattle Dog who served as a narcotics/tracking K9 at the Rutland County Sheriff’s Office in Vermont. He was with the Sheriff’s Office for about a year when he was struck and killed by a vehicle while in the line of duty. “He was my fourth K9 partner but my first dog that I can say was my therapy,” says his handler, Deputy Sheriff Edward Hunter of Betcha. Deputy Sheriff Hunter has been in police work for 35 years and says that K9 Betcha truly helped him cope with his past and present in the job. When Betcha was off-duty, he loved playing Frisbee and driving down the road with his head out the window allowing people to snap pictures of him as he passed by. K9 Betcha gave his life for his career and is greatly missed by his partner, and his off-duty family, as well as his family at Rutland County Sheriff’s Office. 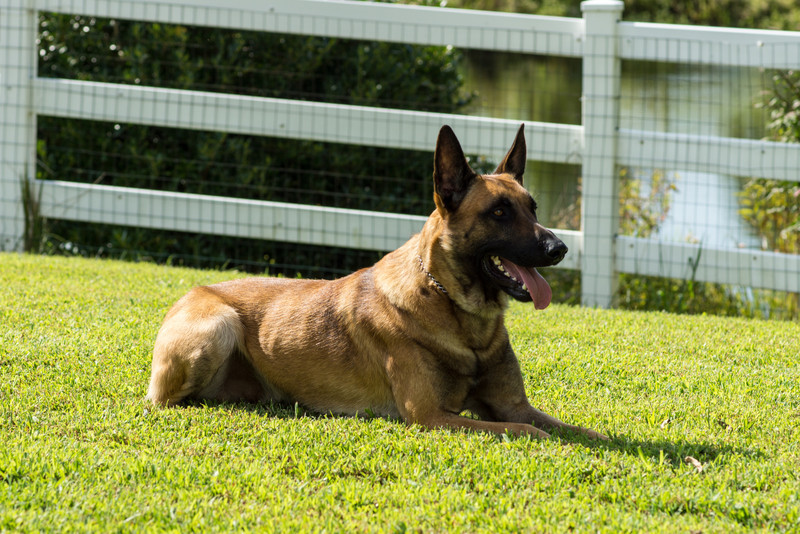 K9 Kirjger, a four-year-old Belgian Malinois of the Norfolk Police Department in Virginia was shot and killed following a violent barricade situation this past January. Police were responding to a domestic violence call when the man barricaded himself inside his home with his wife as a hostage. After several hours, the man exited the home opening fire on the officers, fatally wounding Krijger.

K9 Krijger’s partner, Officer Ryan McNiff began his partnership and friendship during a 16-week training course. During the training, the duo became proficient in numerous skills including: obedience, tracking, open area searches, agility, building searches, apprehensions, and control commands. Even more importantly, Officer McNiff and Krijger learned to work together and to trust one another. “Krijger was not only my partner, he was also my best friend”, says Officer McNiff. “Krijger taught me many things about courage, honor, loyalty and friendship”. K9 Krijger has assisted in locating evidence for countless crimes and he is responsible for over 30 felony apprehensions. Not only was he constantly busy keeping the city safe, Krijger also performed many public demonstrations within the schools and the community. In his off-duty hours, K9 Krijger could be found hanging out on the patio enjoying a bone or running around the backyard with one of his many toys. Krijger loved backyard barbeques with his off-duty family and enjoyed relaxing by the fire pit at night.

When it came to making the ultimate sacrifice in order to protect his partner and his fellow officers, Krijger did not hesitate. “I truly believe that because of him, I am a better police officer and person”, says Officer McNiff. K9 Krijger’s sacrifice is deeply appreciated by his fellow officers, his partner, his off-duty family and the entire community that he served. He is commemorated by his community as a true hero.